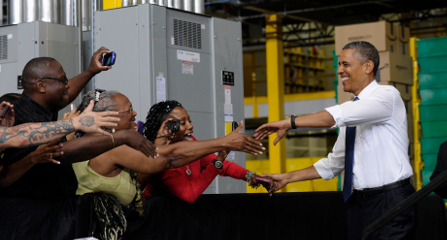 President Obama greets workers in Tennessee before laying out his proposals to boost private job growth and strengthen the manufacturing sector. He spoke at an Amazon warehouse facility in Chattanooga. States likewise have targeted manufacturing. (AP)

President Barack Obama's proposal to cut corporate taxes and boost manufacturing may face an uphill battle in Congress, but several states have already passed legislation this year that aims to do the same thing.

From California to Florida, states are jump-starting their job machines by easing some of the tax burden on businesses and offering tax credits and incentive packages, particularly for manufacturers.  States controlled by both Democrats and Republicans are adopting these plans, as well as states where political control is split, just as in Congress.

In California, Gov. Jerry Brown, a Democrat, last month signed into law his “economic development initiative” that exempts all manufacturing and biotech equipment from a 4.19 percent state sales tax for eight years.

The $750 million package also replaces enterprise-zone tax credits with tax credits for businesses located in areas with the 25 percent highest share of both unemployment and poverty in the state. Brown had criticized the enterprise-zone program that handed out $700 million in credits last year as inefficient and loose in offering the credits, sometimes to companies for just moving existing jobs around the state.

The California Manufacturers & Technology Association has estimated the package represents more than $7 billion in tax savings to California manufacturers, of which $4 billion comes from the sales tax exemption. While job estimates are hard to quantify, a 2002 study estimated a similar sales tax exemption could create as many as 50,000 jobs a year for 10 years, of which 14,000 would be in manufacturing.

Florida, controlled by Republicans, also eliminated the state's 6 percent sales tax on manufacturing equipment and machinery for three years. Gov. Rick Scott has tried to drop the state's corporate income tax completely, but the legislature balked. Instead, over the last two years, lawmakers raised the exemption of taxable income to $50,000, from $5,000, which ultimately spared 12,000 Florida businesses from paying the corporate income tax, according to one estimate.

“With no tax on manufacturing equipment, no personal income tax, and our 15 seaports, manufacturers both outside of Florida and those looking to expand in our state will look at the Sunshine State as a cost-effective place to invest and hire more Florida workers,” Scott said in May when he kicked off his promotional tour in Jacksonville.

Taxes a Key Piece of the Package

Many Republicans on Capitol Hill have already rebuffed the president's proposal to lower the corporate tax to no more than 28 percent overall and for manufacturing firms to no higher than 25 percent. The president wants to use the revenue from those tax cuts to hire workers, build roads, bridges and infrastructure, and expand job-training programs. But Republicans and businesses want to use the revenue to reduce the tax burden even more.

Harvard Business School professor Willy Shih said lowering taxes is just one way to lure companies. It's “a piece of the package, but only a piece because before a manufacturer commits to a location, it will look at multiple factors.” These include finding places that have a skilled workforce and low energy and land prices.

New York, another state regarded as “blue” but with a split legislature, chose another tax plan to help lure companies upstate.  Businesses participating in Democratic Gov. Andrew Cuomo's “START-UP NY” would pay no corporate, sales or property taxes for 10 years if they locate on or near certain college campuses, including the State University of New York. And workers in those companies will pay no state income taxes for the first five years. The program is designed to lure high-tech startups in particular to the college communities.

To be eligible, a business must be a startup, relocating from out-of-state or creating a new line of business or opening a new advanced manufacturing facility. It also must demonstrate that it is creating new jobs and not moving existing jobs. Big box stores are barred from participating.

“These new tax-free communities will give New York an edge like we've never had before when it comes to attracting businesses, startups, and new investment,” Cuomo said.

Other states that signed into law measures to ease the tax burden on businesses and boost job creation include:

Joseph Henchman of the Tax Foundation, a Washington, D.C.-based think-tank, said the corporate income tax “is generally being hollowed-out over time.” Among the reasons he cited were the move to the “single-sales factor,” like New Mexico just enacted, and by the heavy use of incentives by some states to retain and lure companies.

And states are indeed heavily relying on incentives. As Stateline has reported, states struck a wide range of deals with employers this year to boost jobs, particularly in manufacturing.  The packages included Kentucky giving $146.5 million of incentives to land the first U.S. production site for the Lexus ES 350 and South Carolina giving a $120 million package for Boeing to expand operations.

Critics charge that many of these incentive packages don't always create the jobs promised. A report from the advocacy group Good Jobs First this year found that since the late 1970s states and localities have spent more than $64 billion on large incentive packages designed to create or retain jobs.

“Despite their high costs, some of the deals involve little if any new-job creation,” said Greg LeRoy, Good Jobs First executive director.