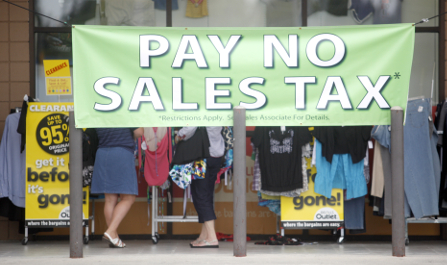 Shoppers browse the outside racks behind a sign advertising Beall's Outlet's tax-free weekend sales in Fort Oglethorpe, Ga. Massachusetts just became the 18th state in the nation to offer tax-free shopping for back to school. (AP)

Massachusetts is the 18th state to join the back-to-school tax holiday parade this year. The legislature has authorized a tax-free weekend to begin Aug. 10.

Gov. Deval Patrick, a Democrat, is expected to sign the bill by the end of this week.

Some 17 other states have the tax holidays for 2013. Many begin this Saturday, mostly on sales of clothing, books and school supplies like notebooks and pens. Several states have expanded the idea to include separate pre-hurricane-season sales tax holidays for building and safety supplies, as well as a handful of “Energy Star” holidays for energy-efficient appliances. These holidays usually take place on different dates than the pre-school shopping sprees.

Massachusetts retailers have only a short time to gear up for the holiday but they are prepared, said Bill Rennie, vice president of the Retailers Association of Massachusetts. “We're not that concerned that people won't be aware of it, even though the holiday was just passed yesterday. We had some indication they (the legislature) would do it, so retailers are prepared with advertising. They can hit ‘send' and get the word out,” he said.

It will be the state's ninth tax holiday in ten years and will temporarily scrap the state's 6.25 percent sales tax on most single items priced under $2,500. The state did not institute the holiday in 2009, during the depths of the recession. The measure is projected to cost the state $20 million in tax revenues, about the same as last year. A provision in the tax holiday bill calls for the revenue to be offset with money from legal settlements or judgments.

The Massachusetts sales tax holiday is one of the broadest in the country, covering purchases of almost everything except restaurant meals, cars, motorboats and tobacco. State Sen. Michael R. Knapik, a Republican supporter of the action, said legislative support coalesced around the measure when the state's Department of Revenue indicated tax collections were up 4.8 percent from last year— $627 million above projections. Many states have revenue collections running above projections, though state budget officials are reluctant to predict that the collections will continue that high.

Rennie also noted that neighboring New Hampshire has no sales tax and the Connecticut sales tax holiday is scheduled Aug. 18-24.

Knapik said in a statement that the action will allow Massachusetts families “to save some of their hard-earned money, especially during back-to-school time. It is also helpful to area businesses which have traditionally seen enormous increases in transactions on these days.”

Opponents argue the tax holidays don't do state economies much good, saying they mostly result in consumers shifting purchases to the tax-free days. Matt Gardner, executive director of the Institute on Taxation and Economic Policy, a Washington think tank, said the loss of state revenue means cuts have to be made elsewhere or other taxes raised.