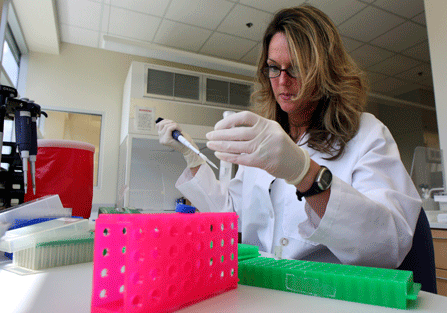 State and local crime labs have received almost $700 million in federal grants over the past five years to reduce DNA testing backlogs, but it's not clear how many cases they actually cleared, according to a new report from the Government Accountability Office.

Since 2000, Congress has directed the Department of Justice to send money to state and local crime labs so they can more quickly process the thousands of DNA samples collected by police each year. But the backlog persists, in large part because police are collecting DNA more often. There were at least 91,000 untested DNA samples at the end of 2011, the most recent estimate available, according to the National Institute of Justice.

To get the grant, crime labs must estimate how many samples they think they'll process by the end of a given year, but they are not required to report the actual number of samples they process. Justice Department officials said they will consider requiring grantees to provide more concrete information in coming years.

Furthermore, nobody knows whether the processed samples actually helped solve crimes, which is the whole goal of DNA analysis, said Sara Katsanis, a researcher at the Institute for Genome Sciences and Policy at Duke University.

“Processing casework is not equal to solving crimes,” Katsanis said.

Each of those untested DNA samples represents an unsolved case. In Chicago, for example, the DNA evidence from 51 rape cases went untested for years, instead gathering dust in the storeroom of a suburban police station. Some of the cases were 30 years old.

"I think that's outrageous," says Sharmili Majmudar, the executive director of Chicago-based Rape Victims Advocates, in an interview with Fox32 in Chicago. "That is not the way that valuable evidence would or should be treated. With sexual violence, the body is the scene of the crime."

Thousands of untested rape kits also have been discovered at crime labs in other cities, including Detroit, Houston, San Antonio, Birmingham and Phoenix. Los Angeles had a backlog of 6,132 rape kits in 2009, but spent $10.6 million in federal grants, donations from the Los Angeles Police Foundation and the city's general fund to clear the backlog to nearly zero by 2011, according to a report from the city comptroller's office. The money was mainly spent on outsourcing the analysis of old DNA samples to private labs.

States likely will expand their DNA databanks after a recent Supreme Court decision upholding  the legality of collecting DNA from people arrested, but not yet convicted, of violent crimes, said Katsanis.