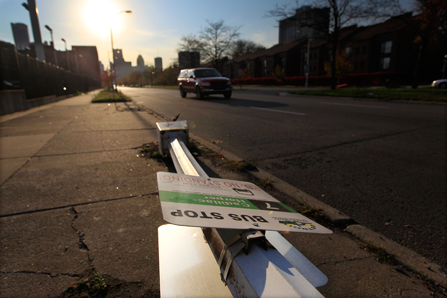 A broken streetlight lies on a sidewalk east of downtown Detroit. Some city leaders say Michigan bears some of the blame for Detroit's decline. (AP)

Michigan has wrested control of Detroit's financial affairs from the city's elected officials, but state leaders insist there will be no bailout for the city or its retirees.

“We don't want to reward mismanagement,” says a question-and-answer document about Detroit's recent bankruptcy filing that was posted on Republican Gov. Rick Snyder's website.  “Keep in mind that we didn't create this crisis.  Sixty years of decline created this crisis.”

That assertion rings false for many Detroiters, who say the state's 1999 repeal of a residency law for city employees, a steep decline in state aid, and other decisions made in Lansing helped drag down their city.

Detroit City Council President Saunteel Jenkins said state leaders stripped Detroit of tools and resources it could have used to manage its affairs more effectively. State aid has dropped precipitously over the past decade, while the legislature has placed strict limits on the ability of the city to raise its own revenues, she said.

“The reality is that the state pension is underfunded as well,” Jenkins said. “The reason that the state now has a surplus is that the state has the ability to tax pensions and withhold [aid to cities]. The governor has more tools in his tool chest to manage than municipalities have.”

According to Jenkins, many companies often don't collect the city's income tax because they aren't required to do so by state law, as they are with federal and state income taxes. She said the city has long asked for such a requirement. “If I live in Livonia and work in the city, there's no real way of tracking that because companies aren't reporting it,” she said. “If companies were required to collect that then it would be a more solid revenue stream.”

Detroit's elected leadership is black and Democratic, while Snyder is a white Republican backed by a GOP-controlled legislature. Those differences have helped to heighten tensions between city and state officials. But because state law gives Michigan a prominent role in repairing the finances of a distressed city such as Detroit, the two sides will have to work together to solve Detroit's daunting problems.

Broadly speaking, Detroit's fortunes began to sink when foreign competition began to erode the dominance of the Big Three automakers. As General Motors, Ford and Chrysler shed workers, Detroit's unemployment rate skyrocketed and its tax base shrunk.  The city's current population is about 700,000, about 25 percent less than it was a decade ago. The population peaked at almost 2 million in 1950.

Detroit's elected officials made the situation worse by borrowing more than the city could afford and delaying difficult cost-cutting decisions. The city's debt and long-term liabilities total approximately $18 billion.  The annual cost of those obligations currently absorbs a whopping 38 percent of the city's budget—a number that would grow to about 65 percent by 2017 without changes.

“This level of debt is simply unsustainable,” state-appointed Emergency Manager Kevyn Orr wrote in his bankruptcy recommendation. “This situation has been managed to date only by deferring other obligations, cutting services to the bone and ignoring the substantial and obvious need for reinvestment in the City.”

Only 60 percent of the city's street lights were functioning as of April 2013, which contributes to high crime rates. Police and firefighters do not have the people, equipment or technology to do their jobs. Current police response times for high-priority calls average 58 minutes, far higher than the national average of 11 minutes for such calls.

Even Jenkins praises Orr for his efforts to tackle the city's debt and long-term liabilities. She hopes the bankruptcy filing will free up cash to improve police response times and other problems that directly affect citizens' quality of life.

“I do believe that on the other side of it we'll be in a better place,” Jenkins said.

But Jenkins and others also point to the state's role in Detroit's decline, especially a 1999 law that ended the municipal residency requirement for city workers. As a result, many of the city's 19,200 retirees and 9,700 current employees no longer live in Detroit, having fled the city's high crime rates and unreliable services.

A year after the state repealed Detroit's residency requirement, the Anderson Economic Group, a consulting firm, estimated the change would reduce the city's annual revenue by $21 million. Nonresidents who work in Detroit pay half the city income tax rate of residents. But many Detroiters believe the actual impact has been far greater, because many of the public employees who have left are police officers and firefighters whose departures have decimated formerly middle-class neighborhoods.

“It would make us feel safer to have police officers living in our neighborhoods,” Jenkins said. “It creates the feeling of safety and security, and people have a more vested interest in the community where they live.”

With the support of Jenkins and Mayor Dave Bing, a bill was recently introduced in the legislature that would allow Michigan municipalities to require new employees to live in the cities where they work for up to their first seven years on the job.

Ken Cole, Detroit's lobbyist in Lansing, said the residency bill would have a significant near-term impact. “Bankruptcy seeks to address debts, but you still have operations,” he said. “It doesn't mean that police still aren't being sent on runs and that garbage isn't being picked up. You're still going to need employees to perform those services, and it makes all the sense in the world to have those people be Detroiters.”

A long, steep decline in state aid also has hurt Detroit and other Michigan cities, according to Mitch Bean, who directed the legislature's House Fiscal Agency for 12 years before retiring in 2011. State aid to Detroit peaked at $334 million in 2002 but dropped to $173 million in 2012. The city's total budget is about $3.1 billion.

Bean said the city made a big mistake in 1999 by agreeing to a new state limit on its ability to levy income taxes in exchange for a guaranteed level of state aid. Despite the deal, after 2002 state aid began dwindling below the promised levels. “There was nothing but a handshake deal on the revenue sharing part,” Bean said. “Detroit has always thought they got mistreated with that, and they probably did. They talk about it all the time.”

Still, said Bean, the city exercised poor judgment in agreeing to the deal—and made plenty of its own trouble through mismanagement and corruption. “There is blame to go around,” he said.

Finding a way to work together to solve Detroit's problems will be difficult, Bean said.

“I think the state should probably do something, but I don't think there's much chance politically that they will,” he said. “Right now things are so controlled by the tea party that I can't imagine you could get anything through the legislature.”