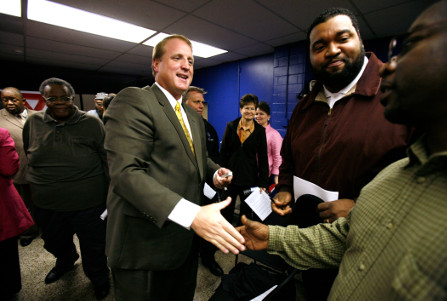 Most states evaluate new legislation for how it might affect the economy or the environment, but what about measuring a law's effect on minorities?

Earlier this month, Oregon became the third state to require racial impact statements for any changes to state criminal laws or sentencing codes. Any new criminal justice proposal must be evaluated if at least one member of each party requests a report. The report, produced by a sentencing commission or legislative analyst, must show how a proposed law could have consequences for sentencing, probation or parole policies affecting minorities disproportionately, and that information is shared with lawmakers before they vote on the bill.

Attention to racial bias in the criminal justice system has been growing. In May, the U.S. Commission on Civil Rights  began a national review to determine if controversial self-defense laws, known as “stand your ground” laws, promote racial bias.

These laws are on the books in at least 21 states and gained national attention after the shooting death of Trayvon Martin in Sanford, Fla. Martin was an unarmed black teenager killed by neighborhood-watch volunteer George Zimmerman.

More states are considering requiring minority impact statements in the wake of Zimmerman's not-guilty verdict and the recent Supreme Court decision ending the federal preclearance requirement for election law changes in states with a history of voter discrimination, said Wayne Ford, a former Iowa state representative. Sponsor of the nation's first racial impact statement bill, which passed in Iowa in 2008, Ford is in talks with lawmakers from 29 states interested in adopting racial impact statements.

“There's no doubt in my mind that minority impact legislation has national, historic implications in regard to enactment and expansion of 'stand your ground' legislation,” said Ford. “Its scope can be expanded to make legislators and the public aware of the potential effects of 'voter suppression' legislation, too."

Lawmakers in Oregon were motivated to enact their legislation by reports of disproportionate numbers of minorities in the child welfare system and in state prison.

“These racial and ethnic disparities suggest that we are using state resources inefficiently and ineffectively,” Democratic Rep. Joseph Gallegos, the bill's sponsor, said in a statement. He was referring to statistics showing that African Americans make up less than 2 percent of Oregon's population, but 9 percent of the state's prison population.

Similar statistics convinced Iowa to become the first state to adopt minority impact statements.  In a scathing report published in 2007, researchers from The Sentencing Project, a national advocacy group which highlights racial disparities in the criminal justice system, found that Iowa had the nation's highest racial disparity in prison populations:  African-Americans account for 24 percent of Iowa's prison population, but only 2 percent of the state's population.

Those numbers made Iowa lawmakers eager to act. “We did not want to be recognized as the nation's leader in the incarceration of black men,” Ford said. Both chambers passed the minority impact statement bill nearly unanimously.

Racial impact statements aren't a panacea, however. Even though Iowa has required them for more than four years, the state still has wide racial disparities in its justice system. The state has the worst racial disparity in the U.S. in marijuana arrests, according to an ACLU study. Blacks are more than eight times more likely to be arrested for marijuana possession than whites, even though usage is about even, according to researchers.

Minnesota, which also uses racial impact statements although not required by law, ranked third behind Iowa in the ACLU report, with blacks more than seven times more likely than whites to be arrested for marijuana possession.

Still, the statements are a helpful tool for lawmakers to evaluate outcomes of new legislation, said Nicole Porter, advocacy director at The Sentencing Project.

“We don't claim that racial impact statements will resolve all disparities, but it will allow lawmakers to be intentional about the effects of the laws they enact,” Porter said.