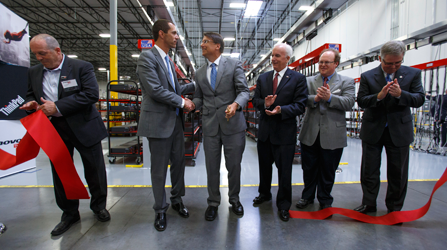 Everywhere you look, there is buzz about U.S. manufacturing's comeback, including in the high-tech sector. Motorola Mobility, owned by Google, is hiring 2,000 workers to produce its new Moto X phone in Fort Worth, Texas. It will be the first smartphone assembled in the United States.

Apple Inc. has promised to invest $100 million to build a Mac product line to be assembled in Texas, using components made in Illinois and Florida and equipment built in Kentucky and Michigan. And just last month, the Lenovo Group, a Chinese company, opened its first plant in Whitsett, N.C., making ThinkPads with some 115 workers. 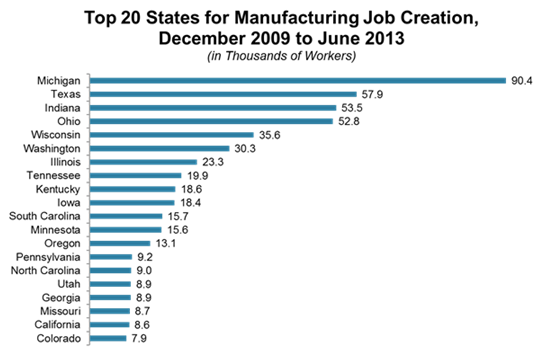 The raw numbers show that the manufacturing sector has yet to recover the 2 million jobs  lost during the 2007-2009 recession. Today, just under 12 million Americans work in manufacturing, down from a peak of nearly 20 million in the late 1970s.

Stephen Gold, president of the Manufacturers Alliance for Productivity and Innovation, said manufacturing is “75 percent recovered from the recession,” and that it will take until the fourth quarter of 2014 for the sector to return to pre-recession levels. “U.S. manufacturing is not yet experiencing a renaissance,” he said at a recent conference on manufacturing by the U.S. Chamber of Commerce.

Sujit M. CanagaRetna, a senior fiscal analyst at the Council of State Governments, called the manufacturing turnaround “encouraging” but says any manufacturing renaissance is a “muted one.”

“We're never going to have the kinds of numbers, in terms of employment, that we saw even 10 or 15 years ago,” he said.

One of the reasons manufacturing is unlikely to return to the high numbers of jobs of past years is that the sector and its role in the U.S. economy have changed.  Today's U.S. manufacturing wields a greater impact on innovation, productivity and trade and less on job growth, James Manyika, director of the McKinsey Global Institute, an economics think tank, said at a recent manufacturing conference at the Brookings Institution.

That's not to say innovation won't create new manufacturing jobs, Manyika said, but probably not at the numbers erased by automation and technology in recent years. In steelmaking, for example,  the 94,000 people working in the industry in 2012 produced 14 percent more steel than nearly 400,000 workers did in 1980, a government report shows.

The days of cavernous factories hiring thousands of workers are gone. “We have to moderate our expectations,” Manyika said about the number of jobs created from a manufacturing comeback.

At the same time, many of the jobs that manufacturing creates today don't involve making goods, the traditional definition of “manufacturing,” which could mean that not all manufacturing jobs are being counted. 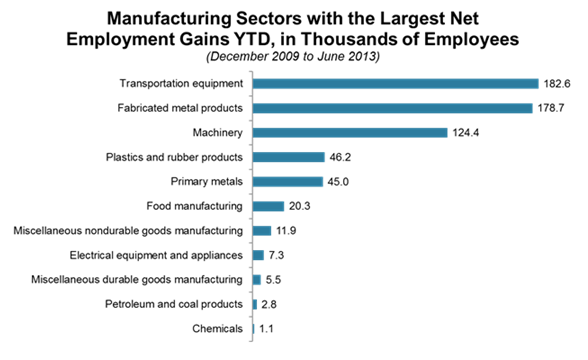 Less than 40 percent of manufacturing employees are directly involved in actually making things, a report from the Congressional Research Service shows.  Some 31 percent of all manufacturing workers now hold management and professional jobs, CRS said.

The McKinsey Global Institute estimated  that 5.7 million jobs in manufacturing supply chains are not figured in as “manufacturing” jobs as they would have been in the past when these tasks were done internally. The difference is these functions are now out-sourced.  These include telecom and travel services to connect workers in global networks; logistics providers that coordinate supply-chain management; and IT service providers.

General Motors Co., for example, is hiring 4,000 new information technology workers over the next three to five years, looking specifically for software developers, project managers, database experts, business analysts and other IT professionals. This year, Ford is hiring 3,000 employees – 800 more than previously expected – of which 80 percent will be technical professionals.

Gene Sperling, director of the president's National Economic Council, disagrees with critics who say that the administration is exaggerating the growth of manufacturing jobs and the industry's potential. “Advanced manufacturing located in the United States has a broader innovation spillover benefit” that goes beyond the private companies involved, he said at the Brookings conference. This impact, he argued, justifies, the federal government's investment in the sector, such as the president's proposal  to use federal money to boost manufacturing.

Manufacturing, for example, accounts for 70 percent of private-sector research and development, a key driver of innovation in the U.S. economy. It also is responsible for 90 percent of patents issued and a majority of U.S. exports, he said. “Manufacturing punches above its weight in areas that we agree have larger benefits for the economy.”

A resurgent manufacturing sector is a key plank in President Barack Obama's economic plan that the president has been stumping for in recent trips to Illinois, Missouri and Florida.

As Stateline has reported, the president wants to create a national network of 15 “manufacturing innovation institutes” at a cost of $1 billion to help companies, particularly small manufacturers, capitalize on cutting-edge technologies. The 3-D printing lab in Youngstown, Ohio, highlighted by the president in his State of the Union address, is that kind of venture.

The initiative's price tag, though, is a hard sell for Congress. Sperling said the administration will use $200 million already in the budget to create another three projects this year.

Underpinning Obama's proposal to create this innovation network is the premise that manufacturing should be located close to design and development.

Some U.S. companies moving back to the U.S. cite this as one reason for doing so. Increasing labor costs in China and lower energy prices in the U.S. are among the chief reasons that companies like Apple, Caterpillar and Ford have brought thousands of jobs back from abroad and “re-shored” them in the U.S.  But for some companies, it was more than that.

When Motorola Mobility announced its plan to operate in Texas, CEO Dennis Woodside said it made business-sense for the company to have its Illinois- and California-based designers and engineers much closer to the factory. Doing so would allow the company to “create a leaner supply chain, respond much more quickly to purchasing trends and demands and deliver devices to people here much more quickly,” he said.

General Electric Co. CEO Jeff Immelt made a similar argument for bringing back hundreds of jobs to its Louisville, Ky. plant, so that designers, engineers, and assembly-line workers could collaborate more easily.

“Proximity matters,” said Martin A. Schmidt, a professor at Massachusetts Institute of Technology, both for existing manufacturing companies and start-ups trying to make it in the market.