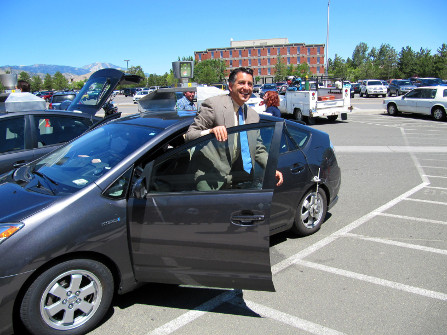 Nevada Gov. Brian Sandoval takes a spin in a driverless car in 2011 in Carson City, Nev. Since Nevada became the first state to allow testing of driverless cars, California, Florida and the District of Columbia have followed. (AP)

PALO ALTO, Calif.— Drivers here already gawk at Google's self-driving car zipping around the freeways. In California, Nevada, Florida and the District of Columbia, the future of transportation is now: All four jurisdictions are setting ground rules for self-driving cars on the roads.

The trend is spreading. In this year's legislative sessions, nine more states debated driverless car bills. While most of the bills died in committees, Michigan's bill is likely to pass by the end of the year with support from Republican Gov. Rick Snyder, a former tech titan who advocated for the new car technology.

“(California, Nevada and Florida) are ahead of us, and aren't we the automotive capitol of the world?” Snyder said earlier this year. “So, I think we should be stepping it up here and make sure we are on the forefront of advances [in] vehicles and opportunity.”

Legislation is just the beginning. These laws authorize companies to test their vehicles on private roads, then public roads. After that, the states and the U.S. Department of Transportation must write rules to allow an average car owner to operate a driverless car when it becomes commercially available.

That could be as soon as 2017, predicted Google's co-founder Sergey Brin at California's bill-signing last year. While Google is not focused on expanding legislation state by state, the company is committed to working on the California regulatory process, which will be completed by the end of 2015, according to a Google spokesperson.  The company is also working to lower the price tag of its autonomous driving system, which currently costs about $150,000.

Legally speaking, self-driving cars are probably legal everywhere already. What drove the legislation to specifically allow the cars on the road was Google. The tech giant wanted to make sure that before they pumped millions of dollars into driverless cars, the cars were explicitly legal and encouraged, not just probably legal and tolerated, said David Estrada, former legal director for Google.

For as much as these laws allow, they raise more questions than they answer. “There are a lot of things we will have to anticipate in vehicle code,” said Michigan Sen. Mike Kowall, a Republican, and the sponsor of Michigan's driverless cars bill.  “The first one that popped into my mind was DUI and drunk driving.  Are you impaired if you are drunk and just programming the vehicle?”

California regulators are also concerned about the data transmitted and collected from self-driving cars. “We will be looking at the collection of data, the regulations around what data can be collected, how it's being stored and how long it's kept,” said Bernard Soriano, chief information officer at the California Department of Motor Vehicles.

The ripple effects of the technology are enormous. For instance, California's state vehicle code, like most states, has more than 40,000 provisions, all of which assume there is a driver in control of the vehicle at all times. Each of those will have to be reviewed.

The technology will also force regulators to rethink the car and driver relationship, and possibly place more emphasis on the regulation of the car than the driver.  For instance, instead of certifying that a driver can pass a road test, the state might certify that a car can pass a test, upending the traditional drivers' licensing system.

Questions also arise about liability for accidents, since the technology that makes a self-driving car is an after-market system. So if a self-driving car hits something, does the fault lie with the manufacturer or the technology company that modified the vehicle? And since insurance rates are calculated based on the crash history of the driver, would those calculations change if there is no driver?

At the local level, driverless cars will change the way cities think about zoning, parking and idling rules, and could eventually allow cities to develop small shuttle-like systems, which would drive predetermined routes and ferry people to and from popular destinations, said Bryant Walker Smith, a fellow at the Center for Internet and Society at Stanford University. Already, a pilot project deploying driverless cars on short, predetermined routes is underway in 12 European cities.

Google's self-driving cars have driven over a half a million miles in driverless mode. The retrofitted Toyotas and Lexus SUVs switch back and forth between fully automatic and fully manual with a quick button push, just like cruise control.

The self-driving feature relies on data-rich maps and a laser that constantly scans the area around the car looking for objects on the road that weren't there in prior trips. That way, the car can stay in its lane, reduce its speed in response to other vehicles or veer away from cars stalled on the side of the road.

If there's a particularly hazardous situation ahead and the driver needs to take back manual control, a calm woman's voice instructs the driver to take over. If the driver does not listen, the voice becomes more insistent. If the driver still does not take over, the car turns on its hazard lights and slows to a stop.

“There's a lot more to this than just a fun car,” said Nevada Rep. Marilyn Dondero Loop, a Democrat, who sponsored Nevada's self-driving car legislation in 2011.

Google estimates that self-driving cars could reduce the annual 30,000 road fatalities and 2 million injuries in the United States by up to 90 percent. The costs of those traffic accidents and the road congestion they cause, in just the 99 biggest U.S. urban areas, amounts to nearly $300 billion per year, according to the American Automobile Association, which supports the legislation.

Kowall, the Michigan lawmaker, said he's gotten the greatest support for the technology from seniors. “They're saying, ‘I can get in that car and I just have to be there as an override. I don't have to worry about hitting someone or be fearful of driving at night.'”

Manufacturers, though, have concerns. Because states are leading the way on automated vehicles, there's the potential for 50 different sets of rules for driverless cars, which is a non-starter for auto manufacturers who sell across the country and around the world.

“We can't build different cars for each state, based on different standards,” said Dan Gage, director of communications for the Alliance of Automobile Manufacturers, which represents 12 large auto manufacturers, including General Motors and Toyota.

At the federal level, the process of integrating driverless cars onto public roads is moving slowly. The National Highway Traffic Safety Administration (NHTSA) issued a working policy statement in May 2013 advising states to leave safety standards up to federal regulators, and outlined the definition of an autonomous vehicle.

The U.S. Department of Transportation is also researching the introduction of driverless cars onto American roadways and soliciting input from researchers and manufacturers.

Google is not the only company manufacturing autonomous driving technology. Bosch is working on a similar aftermarket system, and BMW, Volvo and GM are working on incorporating the technology into their fleets in coming years.

In the testing phase, these cars are driven by trained Google employees, and in Nevada, the cars have a special license plate. California regulators are still deciding whether to require a special license plate, driving test or other notification system to alert other drivers and highway patrol officers that a car is driving in autonomous mode.

In the future, it won't just be passenger cars that will be driverless. Expect to see driverless commercial trucks, buses or taxis. Soriano said the technology might also be useful at large ports, which are controlled areas with well-defined routes for shipping containers to be unloaded from cargo ships and taken to storage locations.

The state legislation, while important to create the framework for safe driverless cars on public roads, was never intended to be the end point for the technology, said Florida Republican Sen. Jeff Brandes, who sponsored Florida's driverless car legislation.

“We wanted to get people thinking about long-term planning,” said Brandes. “With driverless cars, the game changes. These laws take us right to the edge of what's occurring.”