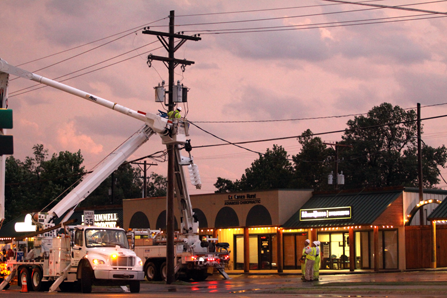 A power pole is worked on by Westar Energy employees Tuesday evening, July 23, 2013, in Hutchinson, Kan. Lawmakers have proposed an interstate compact to bolster the energy grid, helping to add renewable sources like wind and solar. (AP)

Kansas is undoubtedly a windy state, but it is not yet the “Saudi Arabia of Wind” that Republican Gov. Sam Brownback wants it to be.

Kansas has more wind energy potential than any state except Texas, but eight states generate more total megawatts of wind power — even as Brownback and his legislature have taken steps to boost Kansas's wind industry. A key problem: a lack of high-voltage electricity lines to connect the remote areas where turbines churn out power to the bustling regions that demand it.

It isn't easy to build power lines, particularly those that would have to stretch across several states. A complex—and sometimes conflicting—patchwork of federal and state rules has delayed the completion of some projects and deterred investment.

Now, some lawmakers in Kansas and other states are pitching an interstate compact to streamline that process and add renewable energy to the grid more quickly. A bill to join the compact sailed through the Kansas House this year, and lawmakers in Washington and Missouri have proposed similar legislation.

“Here's a conscious effort saying, ‘states, here's a chance to work together,'” said Rep. Tom Sloan, a Kansas Republican and energy expert who helped draft the measure in his state.

Some states lag behind in wind energy production, even though they have plenty of potential. Below are the states that could generate the most megawatts of wind power if their windy areas were fully tapped. The numbers in parentheses represent how each state ranks in terms of total megawatts actually installed.

Now, as government incentives and technological advances spur investments in wind and solar energy, experts see a need for more transmission lines to link scattered turbines and solar panels to the grid—especially as the U.S. demand for energy rises again after dipping during the recession.  As recently as five years ago, the U.S. was building some 1,000 miles of new transmission lines each year. That rate has since more than doubled, according to the North American Electric Reliability Corporation, and it's expected to reach 3,600 miles per year by 2018.

As is the case in Kansas, which sits at the center of a wind tunnel stretching from Eastern Montana and North Dakota down to Texas, some of country's best resources lie far from the people who need it.

Montana, for instance, touts the nation's third best wind resource, according to the National Renewable Energy Laboratory. But 20 states — including some with a fraction of Montana's wind potential — outpace it in generation, according to federal data. Nebraska, which has the fourth highest potential, ranks further behind.

“That really kind of is the missing link in some of these renewable goals,” said Brydon Ross, who analyzes energy and environmental policy for the Council of State Governments, the nonpartisan group that organized a taskforce to craft the compact's model language. “Transmission is one of those issues that often get overlooked in these discussions.”

For many reasons, it's hard to build lines across states. They can draw protests from groups concerned about the use of eminent domain, or the effect on the environment. Even less controversial projects can take years to complete as companies slog through conflicting rules and deadlines in each state a project touches. 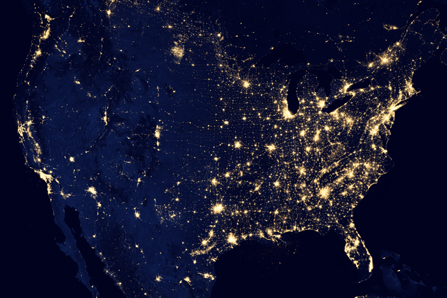 This composite image made available by NASA and assembled by data acquired from the Suomi NPP satellite in 2012 shows the U.S's lights at night. (AP)

Under the proposed compact, participating states would consider a project's impact on an entire region, rather than on individual states. It also would give developers a unified entity to deal with. Any state could join the compact, but for each project, the agreement's rules and conditions would apply only to those states affected by a power line in question.

There is some precedent for collective action: In some cases, states have met informally to study proposed power lines and hash out potential problems. Furthermore, a recent Federal Energy Regulatory Commission rule requires public electricity providers to consider state and local policy when mapping out long-term electricity needs and to decide how to spread out costs.

Jim Rossi, a professor of energy law at Vanderbilt University, called the proposed compact “a laudable effort” likely to speed up power line construction. “There might be some momentum for a state to join this kind of thing,” he said. Rossi was not involved in drawing up the compact, but he reviewed it at Stateline's request.

Federal officials, who have long sought to override state controls to speed up power line construction, also back the idea of an interstate compact—especially since a 2009 federal court ruling now prevents them from sidestepping state decisions to halt projects.

“The next best thing is for the states to address this issue on their own,” said Jason Stanek, an advisor to the FERC commissioner.

States in the West and Midwest, which have the most renewable potential to add to the grid, are the mostly likely to be interested in joining a compact. While some lawmakers may worry about implications for state sovereignty, supporters say the compact would make it simpler to map out power line routes without depriving states of the ability to make their own decisions. Rossi suggested an interstate compact could actually bolster states' collective sovereignty by producing plans more likely to withstand legal challenges.

Others are more skeptical.

Allison Clements, an energy expert with the Natural Resources Defense Council, backs the concept behind the plan — to improve the grid and boost renewable energy. But she said the compact is “short on details,” and might conflict with the planning already required by the federal government. Clements also worries the streamlined deadlines may be too short to allow for thorough review of environmental and other impacts.

The new federal rules have “opened the door for states to re-examine their policies,” she said. “I'd hate for states to lose focus on what they can do.”