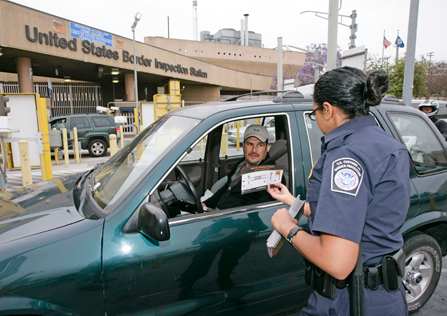 The federal agency that oversees border checkpoints says it will need more than 3,800 new officers to fix delays that waste millions of dollars every year while cargo trucks sit in long lines to cross the U.S.-Mexican border.

But the Government Accountability Office, in a report Wednesday, questioned the need for so many new workers in addition to the nearly 22,000 current customs officers. The congressional auditors noted that three of the six major border crossings they visited were fully staffed. They also said the federal border agency never fully explained how it determined the number of agents needed at each crossing.

The staffing dispute was just a part of a GAO look at how to measure and reduce wait times along the southern border. The agency it was looking at, Customs and Border Patrol, has also said it needs new ports of entry and improvements to existing border stations to speed crossings.

Just figuring out how long it takes to cross the border has been difficult. The auditors said CBP's estimates for wait times are unreliable and inconsistent from one crossing to the next.

At some stations, customs agents estimate wait times by looking at the length of the line and the number of lanes open. They may know, for example, that the wait from a light post or tree is 30 minutes. But that method works only if the agents can see the back of the line on the Mexican side. At some stations, curves in the approaching road or hazy skies can block their view.

Another common tactic is to ask drivers how long they waited to get through. Even if the information the motorists give is accurate, the GAO said, it will be outdated, especially if a backup forms while a driver is in line.

The lack of trustworthy information makes it harder for companies to plan when to send their goods north of the border, and it could lead to even bigger delays.

State transportation departments have been working with the Federal Highway Administration to come up with better ways to track wait times.

The Texas Department of Transportation and researchers at Texas A&M University, for example, have started using traceable microchips, like the ones in key cards, to track how long it takes for vehicles to move through the lines. The wait times are then posted online.

The project now covers six crossings in Texas, with another one in Arizona soon to come. The Texas crossings in the project handle 90 percent of all truck traffic between Mexico and the state.

A three-year Federal Highway Administration grant that launched the project will run out of money in early 2015, but TxDOT spokesman Mark Cross said the agency hopes to find a permanent source of funding. The project is designed to keep going, he said.

The GAO auditors noted that neither the Federal Highway Administration nor the Customs and Border Patrol has committed to long-term funding.