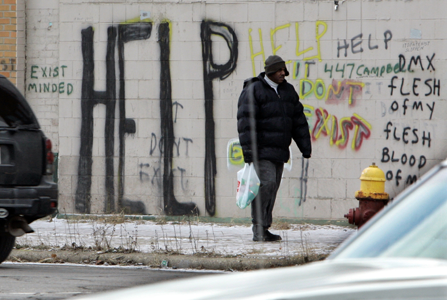 A pedestrian walks by graffiti in downtown Detroit. Michigan Gov. Rick Snyder appointed an emergency manager for the city and approved its bankruptcy filing. Michigan and 18 other states have laws allowing them to intervene in a city or county to repair its finances. (AP Photo/Carlos Osorio, FILE)

Michigan Gov. Rick Snyder is the face of Detroit's bankruptcy. The Republican picked an emergency manager to run the city instead of the mayor and city council. He approved the city's bankruptcy filing and will oversee its outcome, at least through next year when he is up for re-election.

By contrast, California's Democratic Gov. Jerry Brown is not directly involved in the recent bankruptcies of Stockton and San Bernardino. Nor is Alabama's Republican Gov. Robert Bentley an active player in the bankruptcy of Jefferson County, the state's largest local government.

The differences between Michigan, California and Alabama highlight a little-known area of state and local government finance called “state interventions.” Nineteen states allow state officials to intervene in a distressed local government or school district to repair its finances, according to a new report by the Pew Charitable Trusts, which funds Stateline. But few states have intervention laws that go as far as Michigan's.

Among the other findings:

California and Alabama have chosen to stay out of local government operations because they have a decades-long tradition of allowing cities to manage their own affairs. Citing the recent bankruptcies, some officials in both states have called for additional state oversight. California Treasurer Bill Lockyer says at the very least the state should increase its monitoring of local budgets, as the state does with school districts.

Practices vary, but states that endorse intervention typically start by designating somebody to carry it out. Usually this is a receiver, emergency manager, state agency head or financial control board. This person or panel completes the financial restructuring plan, which can include service cuts, tax increases and workers' wage and benefit reductions.

State officials with strong intervention systems say the government should watch over cities for several reasons. One is to protect public safety and health if a city cannot maintain order in a crisis. Another rationale is to avoid the stigma of having a city in distress or in bankruptcy. The Wall Street agencies that rate municipal bonds could downgrade the state's credit rating if its local governments are unhealthy, raising borrowing costs paid by taxpayers. State officials also defend intervention as a way to prevent distress from one city from spreading to another. In Michigan, there is another justification: Economically secure cities help lift the entire state. “The re-invention of Michigan will not be complete without a strong Detroit,” Snyder has said.

But there is little evidence that one city's budget troubles can infect another city or the state as a whole. Despite Detroit's woes, the credit rating agency Fitch raised Michigan's bond rating in April, citing the state's steady progress in improving its economy under Snyder. Alabama and California governments have had little trouble selling municipal bonds despite the county and city bankruptcies in those states.

Detroit Mayor Dave Bing was among the civic, religious and business leaders who initially opposed the emergency manager, arguing that the city's elected officials should guide Detroit out of its predicament instead of the governor. The resistance carried racial and political overtones because much of Detroit's leadership is black and Democratic while Snyder is a white Republican backed by a GOP-controlled legislature. Elected officials in other cities also have contested state intervention because they say it strips them of their responsibility.

But Snyder says Michigan has no interest in running Detroit. “The goal isn't to take them over,” Snyder said of Detroit in an interview with Stateline earlier this year. “It's to be a good partner to help them get back on their feet.”

The Pew report recommends that states considering intervention programs involve a broad array of stakeholders in discussions about solutions. The report also says if a state decides to take over a local government, officials should return the city to local control as soon as possible.

It notes that in states that do intervene, the record is mixed. Central Falls, R.I., exited bankruptcy after only 13 months, but city residents face years of property tax increases and current and future city retirees will get smaller pension benefit checks as a result. Of the 27 cities and towns that have qualified for Pennsylvania's intervention program, only six have successfully emerged from state control. The first two, Aliquippa and Farrell, are still in the program after 26 years.

“One thing I've noticed is there's no clear path to getting out of Act 47,” Pennsylvania Gov. Tom Corbett, a Republican, said in an interview with Stateline earlier this year.

Some of the 19 states with intervention laws monitor local governments to detect budget distress before it escalates into a crisis, the Pew report says. Many analysts praise North Carolina's tracking system, under which local governments periodically send financial data that has been reviewed by independent auditors. A state agency called the Local Government Commission puts together a financial profile of each city and county that is posted on a public database. If the numbers show a potential shortfall, the commission staff takes a series of steps to intervene, including the rare action of running the city.

New York, where many upstate communities have been declining economically for years, recently implemented a stricter monitoring system under state comptroller Thomas DiNapoli. It involves a scoring system, similar to Michigan's, that classifies levels of distress.