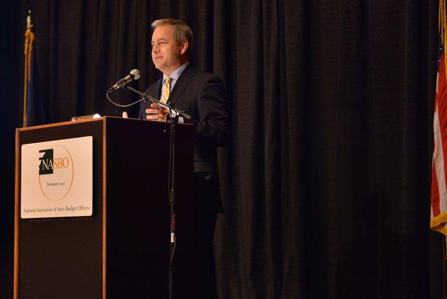 Alaska Gov. Sean Parnell, Republican, welcomes members of the National Association of State Budget officers to their annual meeting in Anchorage Monday. The governor joked that all governors want to hear that their legislatures passed their budgets exactly as submitted.

At the same time, budget officers are facing competing demands for state revenues, he said, including pent-up demand for spending following the Great Recession's cutbacks and “rainy day” funds thirsty for cash. While some states are in worse fiscal shape than others, Mattoon said there is reason for optimism, with caution.

“The fiscal cliff caused everyone to have an April surprise,” Mattoon said.  Budget officers nodded knowingly about a one-time bump in personal income tax revenue as taxpayers shifted income into the 2012 tax year to avoid potential higher federal taxes in 2013. “That is not a repeatable event,” he said.

But overall, personal income taxes have lagged behind the recovery, he said, dipping low during the recession and not recovering to previous levels. “You are introducing a whole lot more volatility into the state revenue system, and we think that's personal income tax driving this behavior,” Mattoon said.

Spending, on the other hand, has been at best flat, he said, leaving state officials yearning for more funds now that the recession is over.

NASBO President George Naughton, Oregon's budget director, told the conference that it's hard for states to move from “holding things really tight” to a slight expansion. “What we are really dealing with now is we are recovering more slowly than expected. Now it's positioning ourselves to take advantage of that.”

The recession forced states to curb spending for their “core” services—education, public safety and human resources, he said. “It's taken things down to brass tacks about what we are really trying to achieve,” he said, while at the same time attempting to build up reserves, which disappeared in many states.

In California, for example, Gov. Jerry Brown persuaded the legislature to pass a $96.3 billion budget in June that directed $1.1 billion into the “rainy day” fund reserves, rather than put it into education along with other funds. The budget also dedicated more for education, health care and other services. Brown had to threaten to veto other bills to get that done.

Michael Cohen, chief deputy director of the California Department of Finance, said it was fiscal uncertainty that led to compromise in his state. He noted that for the last decade and a half, volatility has ruled California – some years spending was up when revenues increased, and then budgets were cut when tax income declined.

The cyclical expanding and cutting “was the most damaging of all our possible paths,” Cohen said at the conference, “That ultimately was the most persuasive argument — that we just don't know how long this will last and so (it's unwise) to make permanent commitments.”

Mattoon also noted that uncertainty at the federal level has a cost that's reflected at the state level. Researchers at Stanford and the University of Chicago, he said, have concluded that federal fiscal uncertainty has resulted in a 2.3 percent decline in economic output and the loss of 2.6 million jobs nationwide — declines that resulted in lower state revenues.