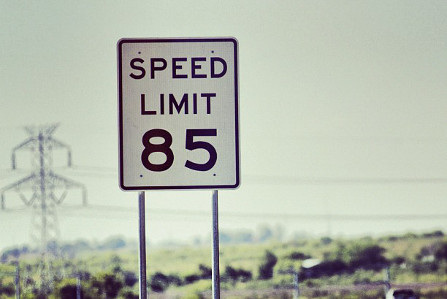 The final portion of SH130 toll road opened in central Texas with the highest speed limit in the country at 85 mph. Other states are close behind. (Art Jonak)

Gentlemen, ladies and kids with driver's licenses: Start your engines. Five state legislatures voted this year to raise speed limits on some divided highways in their states.

They're following the lead of Texas, which last year  bumped the speed limit on one stretch to 85 mph, the highest in the nation.

Ohio and Utah are going full speed ahead with implementing their higher  limits. Maine and Illinois officials are studying when — and whether — to raise their newly approved speeds, while New Hampshire's new law takes effect in January.

Some 36 states have speed limits of 70 mph or above on some roads, according to the Insurance Institute for Highway Safety. Texas set its 85 mph limit on a 40-mile stretch of divided toll highway between Austin and San Antonio (toll: $6.17, one-way).

Speed limits traditionally were regulated by individual states until the mid-1970s when Congress, to conserve energy, designated a national speed limit of 55 mph and threatened to withhold highway funds from any state that exceeded it. But those rules were loosened in 1987 and repealed in 1995.

Since then, states have steadily increased the speed limits on some stretches of roads. Generally, the higher speed limits are set on rural interstate highways or other limited-access roads, though not always.

The Maine Department of Transportation  is studying the issue, after getting the green light to raise speed limits up to 75 mph on interstate highways by the legislature and governor. The department won't make a decision on whether to raise the limit until after Oct. 10 (the statute prohibits implementation before then). A spokesman for the state transportation department said the decision could go either way.

“The bill in the legislature did give the commissioner (David Bernhardt) the purview to raise the limits,” Ted Talbot said. “If he saw fit, he could conduct the traffic study, and upon the results of that, he would decide if it's prudent.”

Illinois Gov. Pat Quinn is considering whether to sign a bill that would raise the limit on some interstates from 65 mph to 70 mph. The urban and suburban counties in the Chicago and St. Louis areas — Cook, DuPage, Kane, Lake, Madison, McHenry, St. Clair and Will — would have the option of setting lower limits if the governor agrees to the statewide increase. The legislature overwhelmingly approved the speed limit increase.

Quinn spokesman David Blanchette said the governor has heard from those who are for and against the speed limit increase. The secretary of transportation and the state police oppose it, and businesses and other transportation groups are for it. “He is weighing the feelings of both sides and will make a decision based on his own personal feelings and the input” by mid-August, Blanchette said.

If Quinn agrees, it will take effect Jan. 1.

New Hampshire's legislature and governor raised the maximum speed limit from 65 mph to 70 mph on specified stretches of roads, effective in January.

On the flip side of the issue, the North Carolina House rejected a state Senate-approved bill that would have hiked the speed on some roads to 75 mph.

Not everyone is happy with the trend toward higher speeds. Critics point to the dangers. “When speed limits go up deaths go up, and when speed limits go down deaths go down,” said Russ Rader, spokesman for the Insurance Institute for Highway Safety . “It seems as though more states are raising speed limits despite the clear evidence that shows what the safety downside is. Higher speeds mean more crashes and more severe ones.”

Speed was a contributing factor in about 30 percent of fatal traffic accidents in 2011 (the last year for which statistics are available), according to the National Highway Traffic Safety Administration. That statistic has stayed about the same for a decade, even as speed limits have increased and safety equipment has improved.

Utah did its own research. The Utah Department of Transportation conducted a study  beginning in 2008 on a stretch of I-15 where the speed limit was 75 mph. The study found a 20 percent drop in the number of people exceeding the posted speed limit, according to Robert Hull, director of traffic and safety with the Utah DOT. In addition, data from the test area through 2012 found there was an 11 percent to 20 percent reduction in speed-related crashes, depending on which stretch of road was being evaluated.

The study also found that the actual speed maintained by drivers on that stretch was about 82 to 84 mph, whether the posted speed limit was 75 mph or 80 mph.

“People are driving at the speed at which they feel comfortable, and they are doing it safely and prudently,” he said.

“When discussing this with my colleagues, we found this is just the reality of what people are driving today,” he told Stateline. “I know we have heard from constituents who were very pleased,” he said, though he acknowledged some detractors.

State police officials were neutral on the issue, he said, which made it easier for the legislature to support it.

Other states' speed limits also played a role in New Hampshire's decision to up the speed on rural Interstate 93 north of Concord to the Canadian border (with the exception of mountainous Franconia Notch) from 65 mph to 70 mph. Part of the reasoning was that neighboring Maine already has the higher limit on some rural highways.

“The limited nature of the 5 miles-per-hour speed limit increase in a targeted region of the state, along with the overwhelming, bipartisan support for the measure, makes me comfortable with signing this measure into law, bringing the speed limit more in line with the habits of our rural travelers,” Democratic Gov. Maggie Hassan said in a statement. “For their safety and the safety of others, I encourage all motorists to use the common sense that Granite Staters are known for and respect the new speed limit."