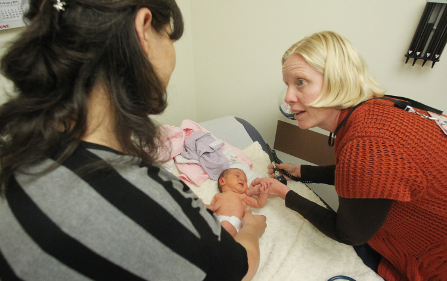 In Portland, Oregon, nurse practitioner Kirsten Roberts exams a newborn. Oregon is one of the 17 states that allow nurse practitioners to work without a doctor's supervision, and more states are considering it. (AP)

When the federal health law takes effect in January, some 30 million more Americans are expected to have health insurance, many for the first time. An already critical shortage of primary care providers may make a doctor's appointment hard to come by. Increasingly, you might hear, “The nurse will see you now.”

Some states are trying to fill the primary care physician shortage with nurses who have advanced degrees in family medicine. That requires relaxing decades-old medical licensing restrictions, known as “scope of practice” laws that prevent these nurse practitioners from playing the lead role in providing basic health services. At least 17 states now allow them to work without a supervising physician, and lawmakers in five big states are considering similar measures.

Advocates for patients, hospitals and insurers agree that allowing nurse practitioners (NPs) to fill in for doctors makes sense when it comes to basic services. But physician groups vigorously oppose the changes, arguing that nurses lack the training to safely diagnose, treat, refer to specialists, admit to hospitals and prescribe medications for patients, without a doctor's oversight.

After six years of legislative debate, Nevada became the most recent state to allow NPs to practice independently. Signed by Republican Gov. Brian Sandoval in June, the new law allows nurse practitioners with at least two years of experience to set up practice. They can open their own autonomous health clinics and provide the same range of primary care services as physicians do.

The hope is that the state, which ranks fifth from the bottom in doctors per capita, will prompt more nurse practitioners to offer primary care services to more patients, particularly in remote areas.

The need for the law, advocates say, was urgent, particularly because Sandoval welcomed the Affordable Care Act's Medicaid expansion in his state, one of only six Republican governors to do so. Starting Jan. 1, an estimated 300,000 currently uninsured adults will get a new Medicaid card in Nevada, and many will want to see a primary care provider.

Alaska, New Hampshire, Oregon and Washington were the first states to adopt broader licensing authority for nurses in the 1980s to increase the supply of primary care providers, especially in remote areas. A handful of other largely rural states, many with severe doctor shortages, followed in the 1990s.

A few more states joined them after passage of the Affordable Care Act in 2010, but this year, five big states — California, Massachusetts, Michigan, Pennsylvania and New Jersey — are considering laws giving NPs total independence. If they are successful, the number of patients in the U.S. with greater access to primary care will increase substantially.

The National Conference of State Legislatures reports that state legislatures considered 349 measures aimed at loosening NP licensing restrictions in 2011 and 2012. So far this year, 178 proposals have been considered. Several states that require physician supervision expanded the types of services that NPs can offer, such as prescribing certain drugs and signing death certificates and other official health records.

But for the nursing profession, the gold standard is full independence. That is the only way, advocates argue, that NPs will be able to make a dent in patients' access to care.

According to the American Association of Nurse Practitioners, 17 states allow NPs full autonomy (see list). Other organizations, including the national Institute of Medicine, include two other states in that category: Maryland and Utah. (The discrepancy hinges on the precise language in the laws describing an NP's ties to a doctor.)

Bills in Connecticut and Kentucky failed to pass this year after fierce opposition from state medical organizations. Lawmakers in both states vow to offer similar measures next year. New York lawmakers proposed a bill granting full independence to NPs this year, but it was never scheduled for a hearing.

Democratic Assemblywoman Maggie Carlton, the lead sponsor of Nevada's scope of practice law, said it took three legislative sessions and six year before “we could get the right people to talk about the right topics at the right time.”

Carlton said she has “faith in nurse practitioners that they will practice up to the top of their license, and when they get there, they will refer to the next level of care just like a general practitioner refers to a specialist.”

According to the federal Health Resources and Services Administration, or HRSA, at least 55 million Americans live in areas with an inadequate supply of primary care doctors. Massachusetts has the most primary care doctors per capita; Mississippi has the fewest.

The nation would need more than 15,000 additional providers to meet the target ratio of one primary care practitioner for every 3,500 residents, according to HRSA, a gap that cannot be filled with physicians.

The Association of American Medical Colleges predicts a worsening shortage ahead. In the next 10 years, as one-third of all doctors retire, there will be 90,000 fewer doctors than needed to serve the nation's aging population. Half of the shortage will be in primary care.

But will relaxing state NP licensing laws improve patient access to care? A study reported this month in the journal Health Affairs says yes. The authors found that between 1998 and 2010, as more states relaxed licensing laws, the number of patients receiving care from NPs increased by a factor of 15.

The American Medical Association and other physician groups argue that NPs lack the same level of medical training — four years of medical school plus three years of residency compared to four years of nursing school plus two years of graduate schools for NPs. The gap in training, the doctors insist, means that NPs cannot safely provide the same services as doctors.

Research tells a different story. Studies have shown that primary care provided by nurse practitioners has been as safe and effective as care provided by doctors.  A 2010 report from the Institute of Medicine points to 50 years of evidence confirming that conclusion.

Supporters point out that doctors, particularly those in private practice, have a financial incentive to limit nurses' independence. Often carrying heavy medical school loan debt, doctors are loath to see money diverted to competing health care services. The Federal Trade Commission has weighed in on several state battles over scope of practice, arguing that physician groups have no valid reason for blocking such laws other than to thwart competition.

Supporters also argue that the practice of family medicine has changed in the past 20 years, making the training and skills of NPs even more appropriate for the job. In the earlier days of family medicine, doctors treated a wide variety of illnesses, set bones and performed minor surgery. Today, most spend their days treating common colds, managing diabetes, hypertension and other chronic diseases, and diagnosing and referring patients to specialists.

Another change is the way primary care doctors are paid. As an increasing number of physicians join large practices or work for hospitals, some predict that they will be less concerned about whether they are losing business to nurse practitioners.  A recent study from The Physicians Foundation, a nonprofit advocate for practicing doctors, reported that one state medical society director said that 60 percent of his members were now employed by large institutions or practices, and they did not oppose expanding nurse practitioners' scope of practice. “The independents are still very vocal,” he said.