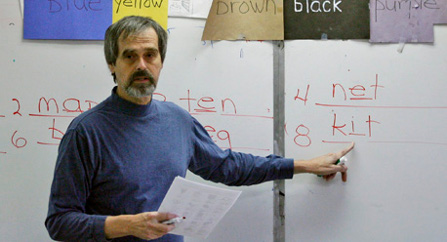 A teacher instructs his students as they recite vowel sounds in an English class in Kansas City, Mo. Interest in English language classes could surge if Congress approves a new immigration law, but so far the federal legislation does not help states pay for any increased demand. (AP)

The immigration overhaul passed by the U.S. Senate could put a big squeeze on the budgets of state and local governments.

The proposal does not help states pay for costs incurred by required policy changes, including ramped up English classes and greater  access to public hospitals and health clinics.

“Potentially, we are going to create a financial catastrophe for states and localities,” said Sheri Steisel, senior federal affairs counsel and a human services expert at the National Conference of State Legislatures. “The states will end up with the cost and consequences of the federal decision-making, with very little resources to rely on to make up the difference.”

The Senate drafted this year's immigration bill after several bruising fights over federal spending. The result is a shortage of funding. Previous immigration packages included substantial money to help states pay for new costs. The last major rewrite of the country's immigration laws in 1986, for example, doled out $4 billion. Even before adjusting for inflation, that is 80 times as much as the $50 million in this year's Senate package.

The $4 billion in the 1986 bill helped states defray costs for providing health care, English classes, public benefits and civics classes that were necessary as a result of the immigration overhaul. It enabled 3 million unauthorized immigrants to stay in the country legally.

The $50 million in the current Senate bill would set up a pool for states to compete for money to help immigrants become citizens. The bill would also help states offset the cost of housing prisoners in the country illegally. But there is no large aid for states, even though the law could prompt up to 8 million people to apply for legal status.

U.S. House Speaker John Boehner, an Ohio Republican, has said his chamber will not take up the Senate proposal. Instead, the House will work on separate bills, covering different aspects of an immigration overhaul. Some of those smaller bills could incur costs to states and localities by requiring them to screen all of their existing employees for legal status or by adding immigration duties to local police departments.

An immigration overhaul could boost the economy and lead to the collection of more taxes, which would bring more money into state coffers. According to an estimate by the left-leaning Institute on Taxation and Economic Policy, states could take in as much as $2 billion more a year.

The Senate bill could boost the economy as a whole, too. Regional Economic Models, Inc., a private research firm, predicts  that three major components of the Senate plan would boost employment by 1.4 million jobs in the next five years. Numbers on the costs, though, are hard to come by. They would depend greatly on how immigrants would respond to changes in the law and on how much of the new costs states would pass on to schools, colleges and localities.

Still, the Senate immigration bill would have financial consequences in many areas:

That means between 4 million and 5 million immigrants would need English instruction, which could strain community colleges or local schools that offer adult English classes. Right now, there are not enough classes even for legal immigrants who need to learn English to pass the U.S. citizenship test.

“That demand is nowhere near being met. It's only increasing even under the current law, and resources for English language instruction are declining due to state budget cuts and lack of federal assistance,” Capps said.

Demand for English classes might not spike right away because people who are in the country illegally now would have to wait at least 10 years before they could get a green card, under the Senate proposal. Congress could decide to give states money to cover the costs later when demand increases.

NCSL, which supports the overall immigration effort, also worries that states and localities will eventually have to pay for medical care for immigrants. The reason has to do with both the Senate immigration plan and the Affordable Care Act, the health care law commonly called Obamacare.

“It's not just what is in the (immigration) bill, it is what is surrounding it,” said Marilina Sanz, associate legislative director for the National Association of Counties.

In the meantime, the federal government is cutting subsidies for hospitals that treat a high percentage of uninsured patients. The idea is that more people will get insurance under the ACA, so fewer patients will be uninsured.

But low-income immigrants will have few options to buy health coverage. Half of the unauthorized immigrants with jobs work for companies with 25 or fewer employees, and companies that small do not have to provide health insurance to their employees under the new law.

“We know they will have health care needs,” said NCSL's Steisel. “And we know that, absent access to health care under an employer-sponsored health care, they are going to be coming to the emergency room.”

State Medicaid systems help pick up the tab for those emergency room visits. States and localities also foot much of the bill for public hospitals or clinics, which could also see a surge of patients.

Steven A. Camarota, director of research at the Center for Immigration Studies, a group that favors more restrictions on immigration, said parents in the country illegally may hesitate to enroll their U.S.-born children in Medicaid now, for fear of deportation. If that threat is gone, parents might be more willing to sign up their children for government programs, Camarota said.

The Senate measure would nearly quadruple SCAAPS's budget, to $950 million, but Congress would have to include the higher amounts in its appropriation bills.

Still, the higher reimbursement rates in the Senate legislation are a bright spot for states.

Fifteen states now let undocumented students pay in-state tuition, but more students in the remaining states would presumably qualify for the cheaper rates once they obtain permission to stay in the country legally.

Dan Hurley, director of state relations and policy analysis at the American Association of State Colleges and Universities, said it is too early to tell what impact that would have on public universities. States could help cushion the blow to their colleges, but they could pass on the costs of in-state subsidies to the schools themselves, he said.

Home Flipping Up; Profits Soar in Some Markets As Smartphones Spread, So Do Laws To Keep Drivers' Hands Off Them
RELATED
Topics
Immigration Revenue and Spending

RELATED
Topics
Immigration Revenue and Spending
About Stateline
Stateline’s team of veteran journalists provides daily reporting and analysis on trends in state policy.
Learn More
Media Contact
Jeremy Ratner
Director, Communications
202.540.6507
Sign Up
Sign up for our daily update—original reporting on state policy, plus the day's five top reads from around the Web.