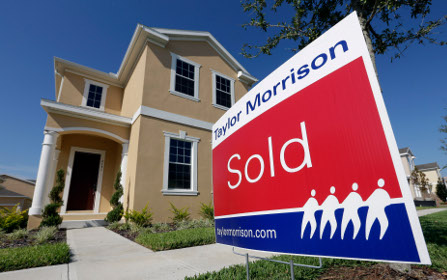 A “sold” sign sits outside a home in Florida. Several Florida metro markets saw an increase of homes bought, fixed and quickly resold for profit. (AP)

The real-life version of “Flip This House” is making a comeback.

In the first half of 2013, house flipping was on the rise in more than two-thirds of housing markets, including New York, Washington, D.C., Chicago and several Florida metros, including Deltona-Daytona-Ormond Beach area and Palm Coast, according to RealtyTrac's Midyear 2013 Home Flipping Report.

“We're seeing house flipping exceed what we saw back during the height of the housing bubble,” said Daren Blomquist, vice president at RealtyTrac, which follows real estate trends.

The news is yet another indication of the rebounding housing market, which collapsed four years ago and helped plunge the country into one of the deepest recessions on record. House flipping is the practice of buying a house, fixing it up and quickly re-selling it.

The reason activity and profits are so high in Washington, D.C., is largely because the market has limited inventory of houses and high demand, not only from buyers locally but from international buyers who can bring cash to the table, Blomquist said.

Nebraska is a bit of surprise. But the housing bubble burst caused a ripple effect in other markets, including Nebraska, causing home prices and demand to drop off in recent years, Blomquist said. That occurred also in Oklahoma and other Midwestern markets.

Nationwide, the number of single family homes bought and then sold within six months increased 19 percent from a year ago and went up 74 percent compared to the first half of 2011, RealtyTrac said, with 136,184 homes flipped.

Experts say house flipping today differs from the practice that many blame for fueling the housing bubble. For starters, banks now have stricter rules for loans, making it harder for the average investor to flip a home without adequate credit.  Many of today's house flippers also are going after foreclosed homes.

Declines in Some Markets

Of the 100 markets that RealtyTrac analyzed, 32 had declining flipping numbers, including Las Vegas, Phoenix, southern California and Atlanta.

“The opportunity to buy and flip homes in southern California is diminishing each month, as the price to purchase fixer-uppers continues to increase rapidly,” said Rich Cosner, CEO at Prudential California Realty. “In some areas home prices have increased so much that there is little or no profit available to flip it.”

Nevada's Reno-Sparks area has seen a 32 percent decline in flipped homes in the last year. Craig King, COO at Chase International brokerage, said the decline is actually a positive sign of the housing recovery. “While there will always be a market for sharp home flippers, our marketplace numbers indicate that home flipping here is back to a place best left to the professionals,” King said.

In Oklahoma, investors who bought homes to flip are reluctant to sell just now because rental rates are skyrocketing, especially in Oklahoma City due to the May tornado.

As Stateline has reported, the housing crisis that threw states into economic free fall is helping many climb back out.

“Housing in general has been a bright spot in the U.S. economy so far this year,” a new report from Standard & Poor's concluded. The real estate recovery, however, has been more about price appreciation than home building, the ratings service said. “It's difficult to overstate the role of residential housing in the economy when … construction of a single family home creates two to three jobs,” according to S&P.

Some experts worry that too much house flipping could lead to problems, including an overheated market. “The best scenario is that we see a temporary spike in flipping as the market rebounds, but the flipping numbers fall back down again once the market has stabilized,” Blomquist said.

Last month marked four years since the official end of the 2007-2009 recession, which was brought on largely by the bursting of the housing bubble and a credit crisis. The economic downturn depressed home buying, and when people weren't buying houses, they weren't purchasing big-ticket items like refrigerators and carpets and other home supplies, affecting demand and thus jobs.