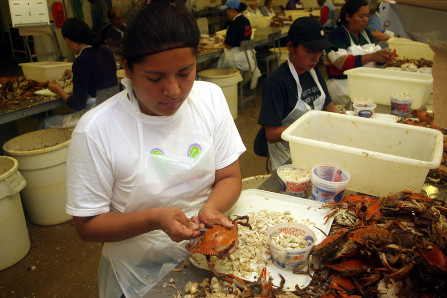 A worker from Mexico removes the meat from crabs for a seafood company in Maryland. Seasonal companies like these often rely on foreign workers, but this year the visas were delayed because of litigation over higher wages. (AP)

From Cape Cod innkeepers to the seafood industry in Louisiana, employers who depend on seasonal foreign workers have scrambled to fill positions this year because of wrangling in Washington over how much these workers should be paid.

At issue is a guest worker program, known as H-2B, which allows employers to hire foreigners for seasonal nonagricultural jobs when they can't find enough U.S. workers. Another program, the H-2A, is strictly for agricultural workers. Both programs are part of the alphabet soup of U.S. immigration laws that Congress is debating.

Industries crucial to state economies rely on the H-2B program, which issues up to 66,000 seasonal visas a year. These workers fan out to the crab-picking industry on Maryland's Eastern Shore, ski resorts in Colorado, shrimp processing plants in Louisiana and beach resorts in the Carolinas. They clean hotel rooms, take your dinner order, coach at your kid's soccer camp and labor on construction sites across the country.

But this year, some employers had to wait weeks longer than they had anticipated for the visas because of a controversial Obama administration proposal seeking higher wages for these workers. As the issue got mired in multiple court cases, mostly attempting to block the higher wages, processing applications for H-2B visas temporarily halted in March by a court order. When the federal government started processing applications again in April, employers say wages rose on average 30 percent.

Under the Obama plan, the wage for an H2-B landscape laborer in Pennsylvania, for example, went to $12.46 an hour, from $8.50. A Florida amusement park attendant's hourly rate rose to $11.60 from $7.98. The hourly rate for a short-order cook in Massachusetts increased to $11.59 from $8.63 while a server there now earns $13.01 from $9.99 an hour, according to the H-2B Workforce Coalition, an employers' group that opposes the higher wages.

The delay caused by the courts created problems for businesses that use these seasonal workers. A small inn along the New England coast, for example, had to cut dinner service and cancel a wedding reception after foreign cooks, housekeepers and other staff arrived 45 days late, said Jane Nichols Bishop, president of Peak Season Workforce in Mashpee, Mass., a staffing company specializing in international workers.

Bishop said that that about 40 percent of her clients received their workers late this year because of processing delays. That includes a Nantucket hotel that had 27 guest rooms occupied over Memorial Day weekend and no H-2B staff to clean rooms, change linens and prepare breakfast, she said. The owner resorted to cleaning guest rooms herself.

The delays “occurred at the worst possible time, when businesses were busy ramping up for the summer season,” said Brad Dean, president of the Myrtle Beach Area Chamber of Commerce. “Had the suspension occurred three months earlier or later, it would not have had as much impact.”

Tourism is Myrtle Beach's top industry with 60 percent of business coming between June and August, he said. “The suspension of processing caused a delay in the middle of the hiring process leaving many businesses to wonder when, or if, processing would be completed,” he said.

Guest worker programs like the H-2B remain controversial. Many employers view the program as an essential source of getting legal workers and that without it, they might have to downsize. Unions and advocates call the H-2B program exploitative; the Southern Poverty Law Center called it “close to slavery”.

Wal-Mart last year suspended one of its seafood suppliers in Louisiana after advocates uncovered a series of abuses of H-2B guest workers, including excessive hours of work, wages far below the legal minimum and oppressive living conditions. A 2010 congressional investigation found hotel owners who threatened H-2B workers that they would be sent home in a “box” if they disobeyed orders. Other foreign workers paid $20,000 for H-2B visas but were never employed in the U.S.

The H-2B program involves three federal agencies, so getting temporary worker visas can be a complicated and lengthy process:

In recent years, most H-2B visa workers have been from Mexico and most end up working in Texas, federal data show. Other top states for H-2B visas so far for this year include Virginia, Georgia, Florida and Maryland, Colorado and Pennsylvania (see  chart).

Not all employers had problems this year getting enough seasonal workers. Industries with earlier seasons had already received visas by March when the feds stopped processing applications.

That includes landscaper James Cali, chief operating officer of a Dallas landscaping company called Southern Botanical. “Our season begins in February, so we just got under the gun on that one,” he said. His company has 86 workers from Mexico on H-2B visas, 12 more than last year, making up about 40 percent of the company's workforce. Workers average $11 an hour. He said he would prefer to hire Americans, but he can't find enough even though he recruits year round.

Of all seasonal jobs, by far the most common H-2B visa is for landscaping and grounds keeping. Other top occupations include amusement park workers, forest worker, maids and housekeeping and meat and fish cutters, federal data show (see lists).

Officials at the U.S. Department of Labor and U.S. Citizenship and Immigration Services say they have caught up on processing the visas, and there is no backlog.

Employers have yet to meet the 66,000 cap for the year, but federal officials say that it is hardly unusual. The overall cap, for example, was not reached last year, DOL said.

Changes Ahead for H-2B?

Texas Agriculture Commissioner Todd Staples, who lobbied in Washington, D.C., earlier this year for changes in the H-2B program, called it “riddled with bureaucracy and filled with outdated quotas.”

The sweeping immigration package that the U.S. Senate recently approved would retain the H-2B program and expand it, although it would still have a quota. The Senate version would not count returning H-2B workers in the cap.

In Maryland, the return rate for these workers is 80 percent every year, “demonstrating the mutually beneficial success of the program,” said U.S. Sen. Barbara Mikulski, a Democrat from Maryland who pushed for the language in the Senate bill. Republicans in the GOP-led U.S. House, however, have expressed concerns with the Senate immigration measure and may reject the one comprehensive package for piecemeal legislation.

As Smartphones Spread, So Do Laws To Keep Drivers' Hands Off Them Medicaid Coverage Limits Access to Medications for Painkiller Addicts
RELATED
Topics
Immigration