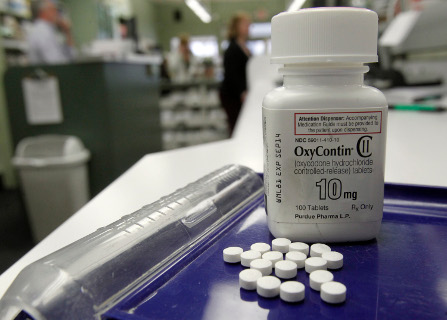 Most Medicaid programs restrict medications used to treat addiction to painkillers, such as OxyContin, pictured here at a pharmacy in Vermont. (AP).

Yet Publicker's patients face severe limitations on the amount and duration of medicines they take to fight their addictions to pain pills. And the consequences of those policies by Medicaid and private insurers are at least as dire as they would be for those with other serious ailments if they were denied proven treatments, he said.

Many private insurance companies and state Medicaid agencies across the country impose sharp limitations on access to medications used in the treatment of the addiction to prescription painkillers known as opioids.

A report commissioned by the American Society of Addiction Medicine found that Medicaid agencies in just 28 states cover all three of medications that the Food and Drug Administration has approved for opioid addiction treatment: methadone, buprenorphine and naltrexone. The study also found that most state Medicaid agencies, even those that cover all three medications, place restrictions on getting them by requiring prior authorization and re-authorization, imposing lifetime limitations and tapering dosage strengths. The study was done by the substance abuse research firm Avisa Group.

“Now that we finally have medications that are shown to be effective and cost-effective it is shameful to throw up roadblocks to their use,” said Mady Chalk, director of the Center for Policy Research and Analysis at the Treatment Research Institute, which researches all aspects of substance abuse.

By any measure, there is an epidemic in the misuse of prescription drugs, most of it involving abuse of opioid painkillers such as OxyContin or Percocet. The Centers for Disease Control and Prevention reported that 12 million Americans acknowledged using prescription painkillers for nonmedical reasons in 2010.

While opioid addiction is on the rise in the United States, so too are the opportunities for treatment. In January, when major provisions of the Affordable Care Act go into effect, 37 million currently uninsured Americans will be enrolled in health insurance plans, an estimated 11.2 million of them in Medicaid.

Among those newly insured will be many with an opioid addiction. (One study showed a higher rate of opioid addiction among current Medicaid beneficiaries than among those on other forms of insurance.) Yet even though the ACA holds out the possibility of new treatment options for many, restrictions on the medicines used in treating opioid addicts clouds the chances of successful recovery, treatment experts say.

Prescription painkillers bind receptors in the brain to decrease the perception of pain. But they can also produce a feeling of euphoria, cause physical dependence and lead to addiction. These opioids can also cause sedation and slow breathing, sometimes to the point of stopping it altogether.

Opioid addiction has existed in the United States at least as far back as the Civil War when opioids were given to wounded soldiers to relieve pain. Later in the century, it was common for women to become addicted to the laudanum, opium and morphine they were prescribed for the discomforts caused by menstruation or menopause. By 1900, 300,000 Americans were addicted to opioids, according to the federal Substance Abuse and Mental Health Services Administration.

Early in the 20th century there were aborted attempts to detoxify addicts with decreasing doses of heroin and morphine, but it wasn't until the 1960s that an effective drug was developed for the treatment of opioid addiction. That medicine was methadone, itself an opioid that has to be taken daily but doesn't create the euphoria of other opioids and also provides relief from the craving for opioids.

Eventually, two other drugs were developed and proved effective for opioid addiction, buprenorphine and naltrexone, the latter of which can be injected and is effective for a month. Both of these drugs can be prescribed by a doctor and filled at pharmacies.

Research has shown successful treatment reduces the rates of disease associated with illicit drug use, including HIV/AIDS and hepatitis. It also reduces crime while enabling addicts to join the workforce and resume their roles within families. Research also shows that detoxification without continued medicinal treatment results in a high rate of relapse. Without the medicine, addicts return to drug use.

Yet, most state Medicaid agencies have found ways to reduce access to these drugs in an effort to cut costs. “For these limitations to be imposed by the government is particularly odious and would not be accepted by any other disease,” said Publicker, who waged a losing battle in the Maine legislature in 2011 to fend off a two-year limitation on treatment drugs to Medicaid patients.

Maine state Rep. Elizabeth Dickerson, a Democrat who introduced a bill this year to continue lifetime restrictions on methadone, denied that she was targeting addicts. Methadone is an expensive program for the state, she said, and it concerned her that addicts were simply replacing one addictive drug for another. She said addicts should be able to achieve a drug-free existence. She pegged the cost in Maine at $15 million a year.

"Maybe they should have to pay for it themselves," Dickerson told Stateline.

The costs of the opioid treatment drugs varies from state to state and from one Medicaid agency to another. As an example, though, in one state, Maryland, the retail cost of a 30-day therapeutic supply of methadone costs about $30 a month and buprenorphine about $320 a month. Injectable naltrexone costs about $1,190 a month.

“The reality is that government exists to live within a lot of parameters,” said Matt Salo, executive director of the National Association of Medicaid Directors. “That's the nature of government and health care. Decisions have to be made.”

Carol McDaid, co-founder of Capitol Decisions, a consulting firm that specializes in substance abuse policy, said it's common to those who draft state budgets to target this treatment first “because it is a voiceless, under-represented constituency.”

“This is a stigmatized illness,” McDaid said. “It's a chronic illness just like diabetes and asthma, but people with those diseases often don't commit crimes. But that's another reason why these treatment drugs need to be fully funded. Unlike those other illnesses, with this one there is a public safety issue.”

Addiction experts are hopeful that the federal Mental Health Parity and Addiction Equity Act will even the playing field between opioid treatment drugs and other medications. The law says that patients with mental illness and substance abuse issues are entitled to the same level of care as those with other illnesses or conditions.

But even though the act was passed in 2008, the federal government has yet to write specific rules that would make it enforceable.

It could take years – and lawsuits – before the law removes the restrictive policies on medicines used in opioid treatments.  In the meantime, addiction specialists are focusing on making the case that these medicines work, and limiting their usage makes no sense.

“This just hasn't been thought out well enough,” said Mark L. Kraus, who practices addiction medicine in Connecticut. “They think they are saving money, but that isn't true. The cost for not treating is far higher to the state than treating.”