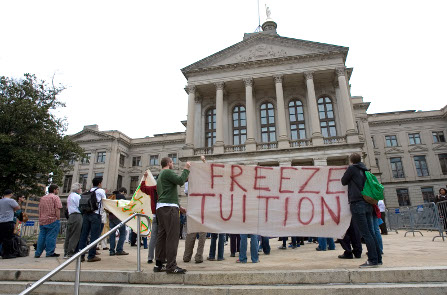 University of Georgia alumni Matthew Boynton and student Maggie Kilgo, right, protest of cutting the HOPE Scholarship during a demonstration at the state capitol Tuesday March 8, 2011, in Atlanta. (AP)

States increased need-based grant aid to undergraduate students by 6 percent in the academic year 2011-2012, while total state financial aid to students grew by about 2 percent, according to an annual survey released Monday.

The survey, by the National Association of State Student Grant and Aid Programs, found that the states awarded $11.1 billion in student financial aid in 2011-2012, including loans and other aid, an increase of 1.8 percent from the previous year, adjusted for inflation.

Frank Ballmann, the association's director of federal relations, said that despite the fiscal cutbacks in a lackluster economy, states “continue to recognize that it's important to have more people attending college and graduating from college (because) ultimately, having qualified college graduates attracts employers who need to fill 21st century jobs.”

States giving the most in grant aid to college students, per capita

In Florida, lawmakers have made a number of changes to the Florida Bright Futures Scholarship Program, which provides merit-based aid to students, to rein in costs and address concerns that they were too easy to get for merit-based awards.

The changes reduced the amount of money students can receive toward their college expenses while increasing the test scores required to receive the scholarships. In 2011-2012, 174,047 students received aid through the Florida program, with an average award of $1,918, according to the state Department of Education.

Likewise, Georgia lawmakers made various changes to the merit-based Helping Outstanding Pupils Educationally (HOPE) scholarships and grants, which are funded by the state lottery, to keep costs under control, according to Georgia Student Finance Commission President Tracy Ireland.

“It was rapidly approaching a point in time where we would not be able to keep up with demand,” Ireland said. The program dipped into reserves in 2011 and it was projected the reserves would be depleted in about 2 ½ years. The changes included reducing award amounts and not paying for books and mandatory fees.

Now, Ireland said, “we're living within the amount of money that the lottery generates and we're able to stay within that.”

The state will increase the amount of the awards next year because lottery revenues have increased, she said.