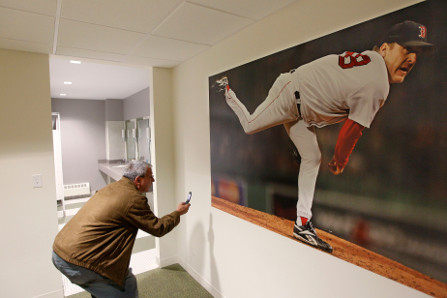 A visitor takes a picture of the Curt Schilling "bloody sox" poster during an auction in 2012 of the former Boston Red Sox pitcher's video gaming company in Providence, R.I. The state approved the $75 million loan guarantee for the company in 2010, which it has to pay back, and is now undertaking a study of all of its tax incentives. (AP)

Rhode Island, famously burned when it issued $75 million in bonds supporting former Red Sox pitching ace Curt Schilling's failed video game company, is undertaking a study of tax incentives to see if they are worth it.

Gov. Lincoln Chafee signed the bill last week to provide a “systematic approach to evaluating whether the state's tax incentives are truly fulfilling their intended purpose in a cost-effective manner,” according to a press release.

The study does not directly address bond issues such as the one to Schilling's “38 Studios” company, approved by the state Economic Development Corporation in 2010. Chafee earlier signed the state's budget, which includes $112.6 million to pay off the loan ($75 million) and interest ($37.6 million). Chafee, a Democrat, said at the time that to fail to do so would seriously injure the state's credit rating.

The study addresses an area of growing concern among states — whether the popular tax breaks that state governments give businesses are worth the investment. States regularly provide companies with tax incentives to boost economic development within their borders.

For example, Maryland is breaking new ground this year with a $3 million offer of tax breaks to be distributed among cybersecurity startups already in the state and those that agree to locate there, to cash in on the cybersecurity boom. The trade group Council for Community and Economic Research, which tracks tax incentives across 50 states, notes that there are more than 1,600 current tax incentives sponsored by states and localities.

Recently, the effectiveness of some of the incentives has been called into question. According to a study in April 2012 by The Pew Charitable Trusts, Stateline's parent organization, states don't always track the results of their incentives. The report found that Rhode Island was among the 25 states “trailing behind” in evaluating its tax incentives, because it had not taken enough steps to determine whether its agreements were effective.

Larry Berman, Chafee's communications director, said that the new law addresses tax credit programs alone. “It's got nothing to do with bond issues. It doesn't have anything to do with 38 Studios or Curt Schilling. Rhode Island is simply looking at all the tax incentive programs to see what's working and what's not,” he said.

The Rhode Island study will focus on:

The number of jobs created by firms with incentives;