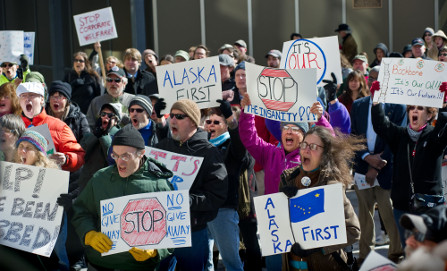 Alaskans protest a massive tax cut for oil producers ahead of its passage in the legislative last April. (AP)

Alaska voters appear set to decide whether to repeal or stick with a multibillion-dollar tax cut for major oil producers.

Supporters say the tax cut could make or break the fortunes of the fossil fuels-dependent state.  But a grassroots group seeking to repeal the tax cut, signed by Republican Gov. Sean Parnell in April, said it has collected enough signatures to add the question to the August 2014 primary ballot.

The group, called Vote Yes - Repeal The Giveaway, said it delivered about 51,000 signatures to the Alaska Division of Elections ahead of a Saturday deadline. That is far more than the roughly 31,000 signatures—10 percent of the electorate — needed to force a ballot initiative.

“There was just public outrage over what the legislation had done,” said Ray Metcalfe, a leader of the group. Metcalfe is a former Republican state representative who later ran unsuccessfully for the U.S. Senate as a Democrat.

If it survives the vote, the law could serve as a test case for how energy companies respond to dramatic changes in a state's business climate.

Supporters say tax changes were needed to spur production in Alaska, which had fallen from its perch as the nation's oil king. Though oil production is surging across the lower 48 states, it has plummeted in Alaska's North Slope nearly every year since 1988.

The legislation was a major victory for Parnell, a former ConocoPhillips lobbyist who spent years trying to overhaul a progressive tax scheme championed in 2007 by Sarah Palin during her brief stint in the governor's mansion.

Oil companies under Parnell's plan are taxed at a flat 35 percent rate, while a series of incentives could drive the effective rate as low as 14 percent. It replaced Palin's progressive tax structure, whose rates began at 25 percent and eclipsed 50 percent when oil prices were high.

In April, ConocoPhillips said it would add activity on the North Slope, spurred by the overhaul.

Critics worry the change will do little to spur investment, starving the state of billions in revenue that could help weather the economic storm. They point out that Palin's policy helped the state sock away billions of dollars even as production declined. They call the new tax plan a gift to Alaska's “Big Three” oil producers — Exxon Mobil, ConocoPhillips and BP. Those companies that have an outsize influence on the citizen legislature. Two senators who moonlight for ConocoPhillips voted yes on the bill, which passed by two votes in the 20-member chamber.

It could take weeks for elections officials to certify the ballot initiative, but organizers say they have already cross-checked enough signatures against voter rolls.

Metcalfe said he expects the initiative effort to shake up several legislative races in 2014, as well as Parnell's re-election bid.

“This is going to upset a lot of people's apple carts,” he said. “They're going to have to explain what they did.”