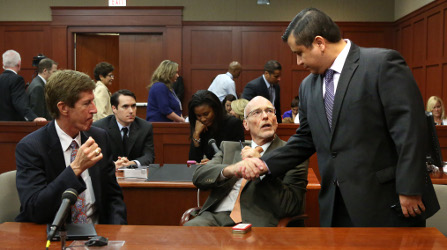 George Zimmerman greets his defense counsel, Mark O'Mara, left, and Don West, as they arrive in court on the 25th day of Zimmerman's trial. Zimmerman was acquitted of all charges in the killing of Trayvon Martin. (AP).

The acquittal of George Zimmerman in the killing of unarmed teen Trayvon Martin in Sanford, Fla., raised fresh discussion of “stand your ground” laws.

The case centered around whether Zimmerman acted in self defense and drew national attention to Florida's law, which allows people to defend themselves with force if they feel threatened in their home, business, car, or a place where they “have a legal right to be.” At least 22 states have a similar law, according to the National Conference of State Legislatures.

While Zimmerman did not ultimately use the “stand your ground” defense in his case, Sanford police did not arrest him until almost two months after the shooting because of the Florida stand your ground rules that require police to have specific evidence to refute a self defense claim in order to arrest someone claiming self defense.

That provision of the law “does a disservice to Floridians because it's so vague,” said Florida Sen. Dwight Bullard, a Democrat, in an interview Sunday with CBS Miami.

It was not until the case drew national attention and a Department of Justice investigation that prosecutors found evidence to charge Zimmerman with second-degree murder. The NAACP Legal Defense Fund is urging Attorney General Eric Holder to undertake a review of the case and encouraging Trayvon Martin's family to pursue civil action against Zimmerman.

Last year, a Florida task force headed by the lieutenant government reviewed the state's “stand your ground” law, but in a final report, the task force only made minor recommendations that required no action from the legislature. No changes were made to the law this year.

“The liberal activists tried to use that tragedy (the shooting death of Trayvon Martin) as an opportunity to take our rights as Americans,” said Florida House Speaker Rep. Will Weatherford, a Republican, on the attempts to change the state's stand your ground law. “We stood our ground on Stand Your Ground.”

Across the country, at least 22 states have “stand your ground” laws, with varying degrees of requirements for when citizens may use deadly force to protect themselves. Before these new laws were put in place beginning in 2005, people who felt threatened outside their home were required to flee from an attacker before they were allowed to use force to defend themselves.

The new laws make clear, however, that if someone feels threatened either inside or outside their home, they do not have to run away and are legally justified in using force to protect themselves.

“If (my family and I) are walking through the mall and someone attacks us, I should not have to retreat. I should be able to defend myself in any place or forum that I need to,” said Florida Rep. Carlos Trujillo, a Republican, on Sunday in an interview with CBS Miami.

Some states just allow people to defend themselves in their homes or businesses, while others extend the law to cars or any place someone “has a right to be.” Florida's law falls into this second category.

The Zimmerman case drew national attention to the “stand you ground” laws, which were promoted by the National Rifle Association and the American Legislative Exchange Council through model legislation and advocacy.

In a study of “stand your ground” laws commissioned by the National Bureau of Economic Research, researchers found that in states with “stand your ground” laws, the number of homicides had significantly increased from the years before the law was enacted. They found that the provision that allows self-defense “in any place a person has a legal right to be” is the driver of the increase in homicides. The increase in homicides, they argue, negates the claim that these laws reduce crime.