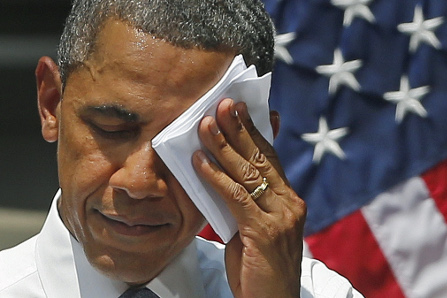 Delaware is literally in a tough spot when it comes to air quality. Downwind of the carbon-spewing Ohio Valley and industrial neighbors such as New Jersey and Pennsylvania, the tiny state has little control over what wafts into its air, whether it's ozone or other toxic greenhouse gases. The state is sometimes called the "nation's tailpipe."

So it would seem logical that Delaware officials, who have been among the most vocal supporters of new air regulations, would be overjoyed by President Barack Obama's plan to tackle climate change. Curbs on carbon dioxide at existing power plants, which account for some 40 percent of man-made emissions in the U.S., are at the center of the president's wide-ranging blueprint unveiled last month, which also calls for boosting renewable energy and natural gas generation.

The state's top air regulator is more subdued. “It's a cautious time, I would say,” Ali Mirzakhalili told Stateline. “We don't know what (the regulations) will look like.”

Politicos inside and outside of Washington are using bold adjectives — “courageous,” “detrimental,” “job-creating” or “job-killing” — to describe the president's plan. But state regulators and others who will play an outsized role in carrying it out are waiting to hear nitty-gritty details about the regulations before passing judgment.

Those stakeholders have issues with electrical transmission, grid reliability and funding that present major hurdles for Obama, who skirted the gridlocked Congress by using executive action.

Until the carbon rules take shape, states will be left with more questions than answers.

Obama has ordered the Environmental Protection Agency to craft the regulations under the Clean Air Act, the 43-year-old federal law that states largely enforce. The agency says it will finalize the rules by June 2015. At that point, states would submit implementation plans.

Meanwhile, states are crossing their fingers that the outcome will fit their interests, which are as diverse as their landscapes. One word continually crops up from regulators nationwide: flexibility.

For states ahead of the curve in the shift toward cleaner fuels, flexibility means allowing them to use tools they've already developed to meet aggressive emissions targets. In the Northeast, for instance, nine states have slashed emissions through a 5-year-old cap-and-trade program for utilities. And California is months into an economy-wide cap-and-trade experiment of its own.

“There's a risk for not recognizing early implementers — punishing them for having gone too early,” Mirzakhalili said.

That notion is at the heart of a widely discussed proposal by the Natural Resources Defense Council. The environmental group would create system-wide standards, rather than for each smokestack, letting states and utilities choose the cheapest ways to meet them.

“We are trying to create something recognizing that states are at different starting processes,” said Dale Bryk, an energy expert with the council. “The states can look at clean energy policies they've already implemented.”

Obama appears to be thinking along those lines. In his speech last month, he highlighted ongoing state efforts to cut carbon and mentioned the dozens of states that have set targets for energy efficiency and production from renewable sources.

The president directed regulators to craft standards “to provide flexibility to different states with different needs, and build on the leadership that many states, and cities, and companies have already shown.”

To many coal-guzzling states, flexibility means something else: achievable targets that can minimize costs and keep the lights on.

Strict regulations would likely speed the shutdown of coal-fired plants, impacting states and regions heavily dependent on the fuel. The surge of cheap natural gas, coupled with other power plant regulations, has already put coal on the ropes, causing its U.S. market share to dwindle.

A recent Duke University study said new air regulations could make as many as two-thirds of all U.S. coal plants as expensive as natural gas-powered plants, accelerating a fuel shift that could create challenges in 20 states that generate more than half of their energy from coal. Kentucky and West Virginia are each more than 90 percent coal-fueled.

Obama aims to use natural gas and renewable energy to replace that lost generation. Some experts fear the transition will be bumpy.

Because of divergent state interests and rules for siting transmission, it's still difficult to send new sources of renewable energy where it's needed most. As a result, sparsely populated states with high wind potential — Montana or Wyoming, for instance — have trouble marketing their resources.

“States are going to have to find a way to come together and site transmission lines,” said Brydon Ross, a policy analyst at the Council of State Governments. “That really is the missing link in some of these renewable goals.”

At the same time, wind and solar energy is less reliable; the sun doesn't always shine and the wind's not always blowing. Though researchers are working on ways to deal with that — through storage technology and integrating backup fuels, such as natural gas — large spikes in demand could lead to hiccups on a grid with less coal power.

On the natural gas side, pipelines and other infrastructure ill-equipped to meet demand spikes have led to reliability troubles in Texas and other states.

“You have to have a more robust electric grid,” said Kansas state Rep. Tom Sloan, a Republican and expert in energy planning. He said that includes improving efficiency and looking into microgrids — local systems typically fueled by a mix of fossil fuels, renewable energy and batteries that can sometimes run without inputs from large utilities.

Sloan is pitching an interstate compact, overseen by the Council of State Governments, to help states coordinate transmission siting.

But until legislatures sign onto the compact and grid technology evolves, Sloan fears that new regulations will threaten reliability not only in Kansas, which runs on more than 70 percent coal, but the surrounding region, too.

The U.S. Department of Energy detailed those vulnerabilities in a 229-page report released Thursday. Obama has called for more money to strengthen that infrastructure.

Mirzakhalili, the Delaware air chief, worries such concerns about the new regulations, along with political pressure, will lead EPA to write watered-down air rules, leaving his state's problems unsolved.

“If flexibility means keeping the status quo,” he said, “that's not going to be productive.”

Obama's plan will almost certainly face another obstacle: litigation. The EPA in recent years has been caught in the middle of an interstate tug-of-war on several air rules, drawing challenges on both ends — from states alleging too much action and others saying the federal government hasn't done enough.

One case, concerning the EPA's cross-state air pollution rule which Northeast states championed, will be argued in the U.S. Supreme Court next term.

Few, if any, followers expect the new rules to stay free of the courts.

Nonetheless, regulators in most states — even those that may litigate — will craft and pitch their plans, knowing that utilities would be hard-pressed to function without the guidance, said Bill Becker, head of the National Association of Clean Air Agencies.

“The fact is, the president is moving forward and many states are interested in preparing themselves,” he said. “The train has left the station.”