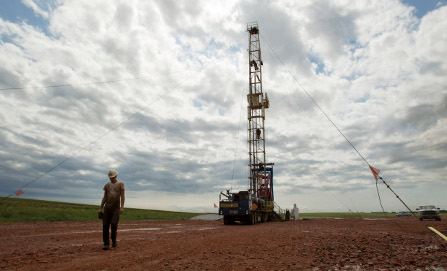 An oil field worker walks away from an derrick outside of Williston, N.D. Thanks to a surge of production on Bakken shale, the state's economic growth is tops in the nation — by far (AP).

North Dakota's economy wasn't much to behold a decade ago. But that's changed dramatically thanks to surging oil and gas production on its Bakken shale.

North Dakota's per person gross domestic product increased nearly 11 percent from 2011 to 2012 — tops in the nation for the second straight year, and three times larger than runners-up Texas and West Virginia.

The U.S. Energy Information Administration spotlighted the growth by GDP in a brief released Friday.

In 2001, North Dakota ranked 38th in real GDP. But crude oil production in North Dakota has more than quintupled since 2007 and natural gas withdrawals more than tripled, thanks to advances in technology such as horizontal hydraulic fracturing. The growth has brought plenty cash and new faces to the once-sleepy state.

Not every energy state has fared so well.

Wyoming's per person GDP fell more than 1 percent between 2011 and 2012, worst in the country, except for Washington D.C. Alaska also declined.

For a host of reasons, Alaska, once the nation's oil king, has seen production plummet over the past two decades, creating budget troubles that Republican Gov. Sean Parnell hopes to reverse with a massive — and controversial — tax cut for producers.

Meanwhile Wyoming's tax revenue has fallen almost 17 percent from its pre-recession peak, according to the Nelson A. Rockefeller Institute of Government, partly due to increased competition and a nosedive in natural-gas prices that has accompanied the surge in activity.