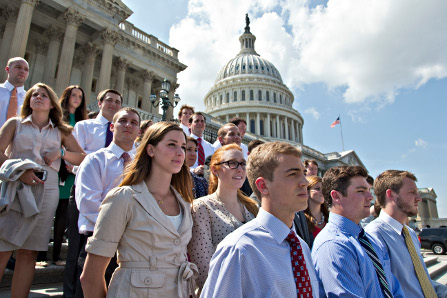 College students wait on the steps of the House of Representatives for Speaker of the House John Boehner and GOP leaders to arrive for a news conference on federal student loan interest rates, which doubled on July 1. (AP)

Governors and state legislatures around the country are taking steps to make college more affordable and accessible as Congress grapples with student loan interest rates.

“For us to attract and grow Tennessee jobs today and in the future, we have to do a better job of building a skilled workforce, which means removing barriers that stand in the way of Tennesseans furthering their education,” Haslam said.

The Republican governor has set a goal of increasing the percentage of Tennesseans with postsecondary credentials from 32 percent to 55 percent by 2025.

The university will be “competency-based,” meaning students will receive credit by demonstrating knowledge by completing assignments, writing papers and passing exams, rather than for credit hours.

Similarly, the University of Wisconsin System announced Thursday that UW-Milwaukee and UW Colleges received approval to offer Flexible Option degrees. The self-paced program is geared toward working adults who have some college credit but no college degree. Like WGU Tennessee, students will earn credit after demonstrating competence of knowledge that can be acquired in the workplace, from free educational resources or other experiences. Flexible option programs are set to begin this fall.

“Our budget included $2 million to fund start-up costs for this first-in-the-nation approach, and I'm pleased to see this come to fruition because we're making it easier for people to pursue higher education,” Wisconsin Republican Gov. Scott Walker said.

In Oregon, a bill awaiting the signature of Democratic Gov. John Kitzhaber would design a pilot program to allow students to attend state colleges and pay for it by committing a percentage of their future earnings. Further legislation would be required for the program to go into effect.

In Congress, senators reportedly reached a tentative agreement Thursday that would change the way interest rates on federal student loans are set.

The interest rate on subsidized Stafford loans doubled from 3.4 percent to 6.8 percent Monday after lawmakers failed to reach an agreement before the July 1 deadline.

An attempt to keep the lower rate for another year failed in the Senate Wednesday. The New York Times reported Thursday that a bipartisan group of Senate negotiators agreed to tie interest rates to the variable rates of the 10-year Treasury bond, with a cap of 8.25 percent for undergraduates and 9.25 percent for graduate students. The fate of the agreement in the full Senate and the House was uncertain.