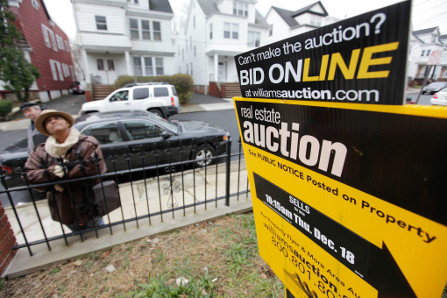 A prospective bidder examines the exterior of a home up for auction in New Jersey. The state has seen a 103 percent increase in the number of foreclosed homes up for auction. (AP)

The number of foreclosures nationwide dropped last month to the lowest level since December 2006. But the problem is still severe in Florida, Nevada, Illinois and Ohio, due largely to the lengthy foreclosure process in those states, a new report shows.

While foreclosure filings, including default notices, scheduled auctions and bank repossessions, are down 35 percent from a year ago, the number of homes sold in foreclosure auctions increased by more than 100 percent in New Jersey and Florida over the last year, according to RealtyTrac's Midyear 2013 U.S. Foreclosure Market Report.

Florida requires foreclosures to go through the courts, which can take years to complete.  States with that requirement are struggling with a backlog of foreclosures, while states that use a non-judicial process  that attorneys administer are faring better.

Blomquist said he considers the increase in foreclosure auctions to be a good thing. “It means those markets are working through that backlog that really needs to be handled before the market can recover.”

The average time it took to foreclose on a house in the second quarter of 2013 was 526 days. It took the longest in New York and New Jersey:  1,033 days. In Florida, it took 907 days. In Virginia the average was 184 days, quicker than any other state.

In 34 states, bank repossessions decreased between June 2013 and June 2012. Notable exceptions include Arkansas (up 143 percent), Oklahoma (up 103 percent), Maryland (up 74 percent) and Washington state (up 71 percent), according to RealtyTrac.

The big spike in Arkansas was due largely to litigation, which stalled the foreclosure process for a time, but now the cases are going through the system.

Sheldon Detrick, CEO of Prudential Alliance Realty in Oklahoma City and Prudential Detrick Realty in Tulsa, Okla., attributed the increase in bank repossessions in Oklahoma to a release of “zombie foreclosures,” or homes where the foreclosure process has not been completed by the bank for a variety of reasons.

Elsewhere, the wave of foreclosures triggered by the housing crisis appears to be ending.  In the Phoenix area, completed foreclosures on single-family homes and townhome/condos in May were down 53 percent from the previous year, according to a new report from the W.P. Carey School of Business at Arizona State University.

Foreclosure levels in the area are now far below the peak levels of March 2009, said Mike Orr, director of ASU's Center for Real Estate Theory and Practice “We expect these numbers to continue to fall over the next several years due to the very tight underwriting standards in place.”