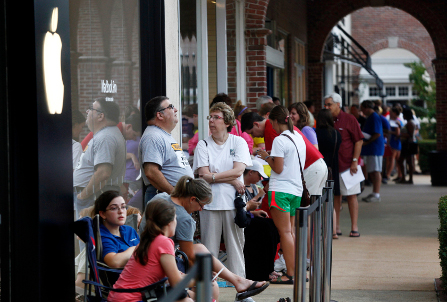 A crowd of about 100 line up outside of the Apple Store in the Saddle Creek shopping center in Germantown, Tenn., to get a head start on last year's tax free weekend. (AP)

Many states with back-to-school sales tax “holidays” are expanding them to cover almost any purchase, in addition to the usual kids' clothing, shoes, books and school supplies.

As schools and students replace ink and paper with pixels, some states are expanding their holidays to cover sales taxes on low-cost computers and tablets. These electronics are eligible for the tax breaks in Alabama, Florida, Georgia, Missouri, New Mexico, North Carolina, South Carolina and Tennessee. (See chart below.)

But some states have broadened the popular holidays beyond school-related items to include other types of clothing, large desktop computers and other electronics. Some now include sheets, blankets, pillows, bedspreads, diapers and baby products.

The expansion has heightened worries that the tax holidays are a drain on state treasuries. Opponents, including many economists, decry the holidays as unproductive or regressive. Despite that, many state legislators are happy to promote them.

At least 17 states have tax-free periods planned for 2013, mostly for school-related spending. But Louisiana's tax holiday August 2-3 includes almost everything bought in a retail store, up to the first $2,500 of the purchase price, including guns, ammunition and supplies to build duck blinds. This was an outgrowth of last year's separate pre-hunting season tax holiday, which is now folded into the August event.

In Massachusetts, the 2012 tax break covered purchases of all personal property items, also up to a value of $2,500. This year's North Carolina tax break covers computers that cost up to $3,500, as well as school supplies and school instructional materials valued at up to $300 per item.

Several states also have expanded the concept to include separate pre-hurricane-season sales tax holidays for building and safety supplies. A few have implemented “Energy Star” tax holidays for energy-efficient appliances.

Consumers and retailers love the holidays, which bring customers flocking to stores. Florida state Rep. Larry Ahern, who sponsored the 2013 holiday legislation, touts it as a way to help struggling Florida families.

“We are trying to take some of the burden off Florida families as they prepare for their children going back to school in August,” the Republican said in a phone interview. Along with tablet computers priced up to $750, the Florida holiday August 2-4 covers books, school supplies and clothing.

Ahern said the cost to the state last year, according to the Florida Department of Revenue, was $28.3 million. But John Fleming, of the Florida Retail Federation, said the group estimated in 2010 that the holiday generated $7 million for the state when shoppers also bought items not included in the tax holiday.

In South Carolina, where the holiday also takes place in the first weekend of August, Samantha Cheek, of the state Department of Revenue, said shoppers will save about $3 million during the event. Cheek said the state does not keep track of whether the $3 million mirrors the amount of lost revenue to the state. The state scrapped a separate gun sales tax holiday in 2010.

While North Carolina is continuing the program and a separate one in November for purchases of energy-efficient appliances, questions are being raised. The state Senate passed compromise tax reform legislation July 3 which would eliminate the tax holidays in 2014, while lowering other taxes. The legislation still faces action in the House.

Debate over whether to offer tax holidays also continues in Massachusetts. “Every year, we look at the totality of the circumstances as to whether the sales tax holiday makes sense,” state Sen. Gale Candaras, a Democrat, said in a statement. “In my opinion, the public likes it, people look forward to it.  I'd like it to be done for Massachusetts businesses and shoppers, alike.”

A legislative committee was still reviewing the tax holiday bill.

In 2012, the two-day sales Massachusetts tax exemption cost the state $20 million. A supplemental budget allocation covered the loss. The state has held a tax holiday every year since 2004, except for 2009, in the depths of the recession.

Massachusetts borders Connecticut, which has its own tax holiday, and New Hampshire, which has no state sales tax on any day of the year. As a result, Bay State lawmakers are under heavy pressure from retailers and consumers to preserve the Massachusetts holiday. “We have New Hampshire bordering us to the north, and it is tax-free shopping up there all year round,” said Bill Rennie, vice president of the Retailers Association of Massachusetts. “We think we recapture sales that we may have lost to New Hampshire.”

But Matt Gardner, executive director of the  Institute on Taxation and Economic Policy, a Washington, D.C., think tank, said the holidays don't make much economic sense.

“There's no clear evidence that sales tax holidays have a big impact on sales,” Gardner said. And lawmakers, he said, are less inclined to highlight the loss of revenue to state treasuries, which has the potential to hurt all taxpayers through higher taxes somewhere else or reduced services.

“They are going to have to increase some other tax or fee or make budget cuts,” he said. “From that perspective, it's not clear that anyone benefits.”

In a report last year, the Tax Foundation also decried the holidays as a way to mask other, broader tax issues.

“Despite their political popularity, sales tax holidays are based on poor tax policy and distract policymakers and taxpayers from real, permanent, and economically beneficial tax reform,” the report said. “Sales tax holidays introduce unjustifiable government distortions into the economy without providing any significant boost to the economy.”