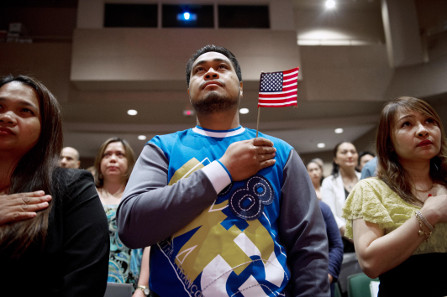 Fiso Kilifi of western Samoa stands for the Pledge of Allegiance during the ceremony to become a U.S. citizen. (AP)

States and localities could collect an extra $2 billion a year in taxes from immigrants—on top of $10.6 billion they get already—if Congress overhauls the country's immigration laws, according to a new report.

States that rely heavily on income taxes would see the biggest revenue boost, according to the analysis from the Institute on Taxation and Economic Policy, a liberal think tank in Washington, D.C. The study did not estimate additional costs that an immigration overhaul might create for states and localities, such as more spending on health care services, in-state tuition discounts and English classes.

Matt Gardner, the institute's executive director, said the figures highlight the potential benefits for states and localities if unauthorized immigrants are allowed to stay in the country and work legally.

“Our concern is that a lot of policymakers seemed to think that the number (for new revenues) is zero,” he said. “One of the eye-opening findings is how much the tax system applies to undocumented immigrants right now.”

Immigrants who are in the country illegally already pay sales taxes, property taxes and even income taxes if they use a false identity to get a job.

But immigration opponents dispute ITEP's assumptions. The Federation for American Immigration Reform said the analysis overstates how much money unauthorized immigrants already pay in taxes, and did not fully consider purchases they make in the “underground” economy.  The ITEP study also overestimated the number of immigrants who would meet the requirements to qualify for legal residency, according to critics.

Steven A. Camarota, director of research for the Center for Immigration Studies, predicted that because immigrants tend to have lower levels of education, they will be a net cost to state and local governments. About half of immigrants, he calculates, have a high school education or less. “They're going to be a significant fiscal drain, no matter how you slice that salami,” he said.

Even under the ITEP analysis, the size of any new benefit for states would depend on state tax structures. California would pull in the most money of any state: an additional $327 million a year. Not only does it have the most unauthorized immigrants of any state, it also relies on the income tax and has strict limits on property taxes.

Oregon would get the biggest percentage increase in tax money from an immigration deal, with 65 percent growth, according the analysis. Vermont would get the smallest, with just 1 percent.

The institute predicts that under an immigration overhaul, the families of workers who are now in the country illegally would go from paying 6.4 percent of their income to state and local taxes to 7 percent. That is less than what low-income and middle-class families typically pay, but it is similar to the rates of wealthy households, Gardner said.

The Congressional Budget Office estimated last week that the immigration bill passed by the U.S. Senate would reduce the federal deficit by $135 billion over a decade.

RELATED
Topics
Immigration Revenue and Spending
Projects
Immigration and the States Project
About Stateline
Stateline’s team of veteran journalists provides daily reporting and analysis on trends in state policy.
Learn More
Media Contact
Jeremy Ratner
Director, Communications
202.540.6507
Sign Up
Sign up for our daily update—original reporting on state policy, plus the day's five top reads from around the Web.