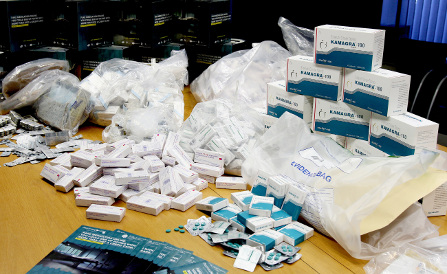 In their search for cheaper prescription drugs, Americans are increasingly turning to Internet pharmacies, which federal investigators say skirt U.S. and state regulations and sell misbranded, adulterated and counterfeit drugs. These transactions — often without a legitimate prescription —put consumers at risk, the Government Accountability Office said in a new report.

Most of these rogue Internet pharmacies are located overseas, which often puts them beyond U.S. enforcement action, and are also skilled at avoiding detection and identification, the GAO said. Even when the U.S. has used diplomatic pressure to close their websites, many pop up again under new names.

The problem is big and getting bigger. According to LegitScript, an Internet pharmacy verification service, there were more than 34,000 active rogue Internet pharmacies as of April 2013.

A few recent settlements between the federal government and prominent companies doing business with rogue Internet pharmacies reflect the financial dimensions of this black market.

In a 2011 settlement with the federal government, Google agreed to forfeit $500 million for allowing some of these illegal pharmacies to place sponsored ads in search engine results. In 2013, United Parcel Service paid out $40 million dollars for transporting and distributing prescription drugs from identified illicit Internet pharmacies to American consumers from 2003 to 2010. Both companies have agreed to stop doing business with such pharmacies.

Federal agencies, such as the Department of Justice, the U.S. Customs Service and the Internal Revenue Service, usually take the lead in enforcement efforts against these companies. Often the violations involve federal crimes such as fraud, money-laundering and drug-smuggling.

“These cases are so complex that it requires cooperation over multiple federal agencies,” said Marcia Crosse, the author of the report and director of health care for the GAO. Enforcement is complicated when illegal pharmacies locate components of the businesses in different countries, for instance, putting computer servers in one country while processing payments through a bank in a second country and shipping drugs from a third.

The rogue pharmacies violate state laws as well, including operating without a pharmacy license and shipping drugs to consumers without legitimate medical prescriptions.

But the GAO report says that because most rogue Internet pharmacies operate from abroad, states lack the authority, the ability or the resources to investigate and prosecute the illicit companies.

States are also hampered in trying to take action against Internet pharmacies that operate in other states because of differing laws and regulations. For example, states may define what constitutes a prescription differently. Some may require an in-person examination before a prescription is written while others take no position on the issue. That incongruity has stirred calls for a federal definition of a valid prescription.

The GAO report says educating the public is one of the most effective tools in undercutting the rogue pharmacies. Toward that end, the National Association of Boards of Pharmacy publishes on its website a list of legitimate and illicit Internet pharmacies as a consumers' guide.

According to the Food and Drug Administration, one in four users of the Internet has purchased medications online. A third of them say they don't have confidence in the safety of the drugs they are purchasing.