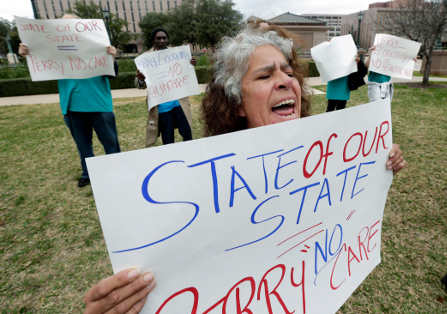 A hallmark of President Obama's health law is that it requires insurers to cover early detection and disease prevention services at no cost to the patient. The new preventive care guidelines are intended to improve overall health, reduce the number of preventable deaths and lower costs.

But some of the nation's unhealthiest people — 25 million low-income adults who already qualify for Medicaid — aren't likely to receive those benefits, because the requirements in the Affordable Care Act pertain only to private insurers, Medicare and Medicaid expansion programs.

Preventive Care in the States

“The decision by Congress to leave existing Medicaid beneficiaries without the right to receive these preventive services means that many low-income people will continue to go without this care,” concluded researchers Sara Wilensky and Elizabeth Gray of George Washington University in Washington, D.C.

In an article in this month's issue of Health Affairs, the authors present the results of a 50-state survey of adult preventive services covered by existing Medicaid programs, revealing wide disparities among states and overall confusion about which preventive services are covered.

For example, less than half of all states explicitly cover many of the most effective preventive services, according to the report. These include alcohol misuse, healthy diet and obesity counseling; screening for cholesterol, depression, diabetes, high blood pressure, osteoporosis and abdominal aortic aneurysms; and counseling on the use of aspirin to prevent cardiovascular disease.

All but 12 states cover well-adult doctor visits in which screenings and counseling can be offered. But existing Medicaid programs typically do not include guidelines about what preventive services should be offered, leaving it up to individual doctors to decide what tests to perform.

In fact, the researchers found that many Medicaid rules contained confusing language indicating that coverage of any procedure, including preventive testing and counseling, would be denied without proof of “medical necessity.” By definition, the authors explain that preventive services cannot be described as medically necessary because they are intended for patients who are not yet showing symptoms of the diseases they are intended to detect.

Preventive care is especially important for Medicaid enrollees because they are more likely than others to have the chronic conditions the tests target, including hypertension, coronary heart disease, diabetes and depression.

“If these services are so crucial to good health that coverage of them is required for so many others, why were people who are currently on Medicaid left off of health reform's prevention bandwagon?” the authors asked.

The authors recommend that managed care companies providing Medicaid plans voluntarily cover the most effective preventive services. In addition, states that do not define what types of tests doctors could perform should instruct providers to follow national guidelines for preventive care. Finally, states could give beneficiaries clear information about which preventive services are covered so they can be better advocates for their own health, they said.