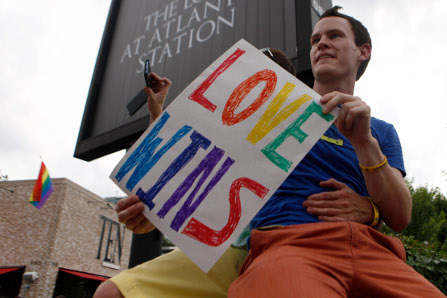 After the U.S. Supreme Court's gay marriage rulings on Wednesday, Daniel Hicks sits on a pillar with his boyfriend to watch the local crowd celebrate in Atlanta, where state law still bans same-sex marriages. (AP)

There's a new front in the fight over gay marriage: state-by-state reciprocity.

A legal term for one state recognizing the policy and laws of another, reciprocity will prove central in the fast-approaching debate over whether the three-dozen states with bans on same-sex marriage will have to recognize those performed elsewhere.

In the wake of this week's historic Supreme Court rulings, the question is likely to become the next crucial battleground in the debate in the states over gay marriage. Many expect the issue of whether states have to recognize same-sex marriages to be tackled before the legal fight over the bans themselves. The issue is at the heart of a lawsuit soon to be filed by an openly gay lawmaker in Alabama, as Stateline reported Thursday.

President Barack Obama weighed in on the issue a day after the court rulings, saying he believed same-sex marriages performed in one state should apply in others, regardless of any bans.

“If you've been married in Massachusetts and you move someplace else, you're still married,” he said. “Under federal law you should be able to obtain the benefits of any lawfully married couple.”

“But I'm speaking as a president,” he added, “not a lawyer.”

Whether that view is correct, and will ultimately win in the states and the courts, remain uncertain.

The Supreme Court's landmark gay marriage rulings cast doubt on state same-sex marriage bans in the states that have them, but left them in place for now. State recognition of others' same-sex marriages wasn't directly addressed in the cases before the court.

Still, the issue is arguably as significant as those at the heart of the dispute over the federal Defense of Marriage Act, which barred married same-sex couple from receiving many federal benefits and other privileges.

In the states, similar concerns from the federal DOMA case apply as well: Many states offer preferential tax treatment to married couples, have tailored adoption rules to marriage and have divorce procedures that rely on that states' recognition of a marriage.

But the underlying issues are complex, as will be the legal fight over whether states can refuse to recognize legally performed marriages. For starters, as strongly as the Supreme Court's majority opinion denounced DOMA on Wednesday, it also stressed states' rights to define marriage within their borders.

What's more, the federal Defense of Marriage Act's Section 2, which is still on the books despite this week's ruling, allows states to refuse to recognize marriages performed elsewhere. And many state laws banning gay marriage block the state from recognizing same-sex marriages, much as the DOMA law allowed the federal government to do before Wednesday's ruling.

The practical and legal fallout is murkier than the plain-English bans would lead most to believe. And some say the Supreme Court's ruling provided a clear path for same-sex marriage supporters to challenge states based on the same constitutional and equal protection grounds the justices adopted in their ruling.

“It's simply stupid, nutty and a violation of equal protection to say you're different than the people who stayed in New York after they got married,” said Michigan State University law professor Mae Kuykendall, using an example of a couple who moved to a state with a ban after marrying in New York. “There's no longer any rational reason for states to refuse recognition.”

“The history of DOMA's enactment and its own text demonstrate that interference with the equal dignity of same-sex marriages,” he wrote. “DOMA writes inequality into the entire United States Code.”

But the ruling was similarly strong on states' right – so much so that both Chief Justice John Roberts and Justice Antonin Scalia, in their dissents, criticized the majority for failing to recognize the contradictions in the ruling.

“The majority arms well every challenger to a state law restricting marriage to its traditional definition,” Scalia wrote.

Historically, states have set their own marriage policies, whether it was over the age of consent and license procedures to the question of interracial marriage that came to a head in the 1960s. By that measure, states should be able to continue to enforce their own laws, said Jim Campbell, legal counsel with Alliance Defending Freedom, a Christian religious freedom advocacy group.

“The message to me is clear that states have the rights to define marriage,” he said.

In practice, though, that could cause myriad problems, both for individuals and government at the state and federal level. A legally married couple in a state that refuses to recognize the marriage, for example, could be entitled to some federal benefits but not others. And what if that couple adopted a child in another state, or wants to divorce? For now, it's unclear how some of those situations would be resolved.

To address the situation, U.S. Senator Dianne Feinstein of California filed a bill Wednesday after the rulings to ensure the federal government would recognize same-sex marriage regardless of where the couple lives. It's doubtful the Democrat's measure would pass the Republican-controlled House, though. But it at least implies there's ambiguity over whether the federal government would recognize legally married couples living in states with bans.

If nothing else, the rulings this week will lend plenty of fodder to same-sex marriage supporters when they go to court over some states' refusal to recognize legally performed marriages.

Those supporters will be armed with a strong equal protection opinion from the Supreme Court as they make their case. They'll also be able to show tangible benefits – such as Social Security payments and tax treatment – that couples might not receive if their state refused to recognize their marriage.

“They basically said we're going to set a pretty high bar” for laws that treat same-sex couples differently, Jonathan Rauch, a senior fellow at the Brookings Institution, said. “The Supreme Court left the door wide open to other challenges, essentially invited them.”