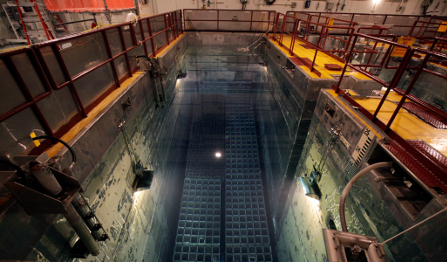 Four U.S. senators are hoping to answer a question states have long been asking: where will the country permanently deposit the thousands of tons of nuclear waste piling up at sites ill-suited to handle the load?

It's a problem that has been left unresolved for decades, as the federal government has struggled to find a site that state and local officials can agree on.  The bipartisan group of lawmakers on Thursday proposed much-anticipated legislation aiming to cut through the political gridlock.

The wide-ranging legislation would create an independent Nuclear Waste Administration, shifting management from the Department of Energy. It would also green-light the construction of new temporary and permanent storage facilities. Under the plan, states and localities would apply to host the waste and set conditions for its transfer.

More than 65,000 tons of spent nuclear fuel is stored at operating or shuttered reactor sites throughout the country. But those 72 sites, located in 34 states, were meant to be temporary and they are filling up. Some 2,000 additional tons of waste are produced each year, according to a 2012 report by the president's Blue Ribbon Commission on America's Nuclear Future, whose recommendations were largely incorporated into the new bill.

Experts say those sites, compared to permanent repositories, are more vulnerable to natural disasters such as floods and earthquakes. Those fears have only grown following the deadly earthquake and tsunami that rocked Japan's Fukushima Daiichi nuclear plant in 2011, and more recent news of leaks of radioactive material at Washington State's Hanford storage site.

The federal government's failure to act on the issue has long stirred anger in states, including many that have enacted moratoriums on nuclear power plant construction that can't be lifted until the problem is solved.

For more than two decades, the solution was thought to be Yucca Mountain in Nevada, and the federal government spent some $100 billion readying it to serve that purpose. But the Obama administration abandoned those plans amid fierce and ongoing political opposition.

Meanwhile, for 30 years federal law has required utilities to pay fees into the Nuclear Waste Fund, meant to finance permanent storage that never materialized. The unspent balance on that account tops $28 billion. The plan's failure has irked state utility commissioners because the fees are passed on to electric ratepayers.

“The government has our money — we have their waste,” said David Wright, of the South Carolina Public Service Commission, at a Congressional hearing last summer.

That fund would finally be tapped under the new legislation, which is expected to see resistance in the Senate and even more in the House.

The National Association for Regulatory Commissioners, one of many groups that has been outspoken on states' waste woes, is still reviewing the plan, but said it expects "to find many positives which could help revitalize the nation's long-failed spent-nuclear fuel policies, if passed by Congress."