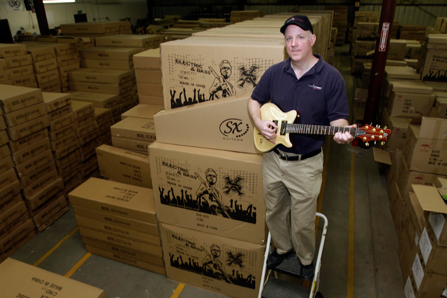 Kurt Zentmaier poses in his warehouse full of guitars in Claremont, N.H. He sells guitars online only and doesn't want an Internet sales tax. Despite lack of federal action, some states are moving in that direction. (AP)

(CORRECTED 7/2/2013: Nevada did not extend its temporary tax increases, so Nevada bullet has been deleted)

Not waiting for Congress to act on Internet sales taxes, some states are imposing a sales tax on online transactions starting July 1 by slapping levies on items like telephone ringtones, digital audio book downloads and music.

July 1 is the beginning of the fiscal year in most states, and the preferred start date for new or updated taxes. This year, legislatures changed tax rates on significant parts of the economy, including gasoline or fuel levies, sales taxes and property taxes.

Perhaps the most innovative new taxes are in cyberspace. Minnesota is leading the way in moving the taxman into Internet sales, by imposing taxes on digital audio works like songs, readings of books, speeches, ring tones or other sound recordings. The 6.875 percent sales tax does not apply to “ring back” tones or music that is played while a caller is on hold.

Iowa is doing something similar, imposing its 6 percent sales tax on transactions across the Internet into the state. The state has declared that it is a “sales tax nexus” for retailers conducting business in the state via Internet sales. The traditional definition of “nexus” for sales tax collection purposes has been whether a business has a location in the state or employs people in that state. Both Minnesota and Iowa have redefined the term to capture online sales to residents. These two states, along with Maine, are the latest in about a dozen states that have enacted some type of Internet tax.

States think they could corral $23 billion in Internet sales taxes, according to the National Governors Association. Congress has been considering a bill to let states collect sales taxes on Internet transactions, but the bill is stalled in the House. Meanwhile, new ground is being broken in the online area beyond the Beltway.

“It's part of a broader trend in that direction,” the Tax Foundation's Joe Henchman said of taxing Internet transactions. “States are tired of waiting for Congress to act and are looking to defy or creatively interpret the law in the meantime.”

Maine has enacted a 5 percent Internet transaction tax law, but it will not take effect until 90 days after the legislative session ends. The session was scheduled to end June 19, but wrangling over the budget between Republican Gov. Paul LePage and the legislature has delayed adjournment.

Lucy Dadayan of the Nelson A. Rockefeller Institute of Government said states have been consistently losing billions in sales tax revenue to Internet companies. Since sales taxes make up about one-third of all state tax revenue in the states that have a sales tax, this is a big hit due to “consumer spending shifts toward lightly taxed services and the difficulty of collecting taxes on Internet-related transactions,” she said.

Minnesota also moved this year to tax services. Starting July 1, when a repairman comes into your office to fix your copy machine, the bill will include a 6.87 percent sales tax on that service. (Home office equipment is exempt).

Dadayan said taxing services is another way states can garner more revenue in unconventional ways. She said “gimmick” taxes, such as those on cigarettes, have been raising less revenue in recent years (as fewer people smoke), leaving states in a bind for funds.

“Business-to-business taxing will be another way of broadening sales and services taxes,” she said.

Among other tax changes that go into effect July 1:

In half a dozen states — California, Maryland, Virginia, Kentucky, Connecticut and Vermont — that old reliable, gas taxes, will increase just as summer travel peaks. In Connecticut, current taxes on a gallon of gas are about 47 cents (local jurisdictions tweak the total); the increase tacks on about four more cents per gallon.

Virginia raised taxes on diesel fuel, and the law kicking in July 1 will tie gas taxes to gas prices and inflation. In addition, the northern part of the state, along with the Virginia Beach metro area, will see increases in the local sales tax from 5 percent to 6 percent, while the rest of the state's sales taxes go from 5 percent to 5.3 percent.

Maryland gas taxes are going up by four cents in July and they could rise to as much as 20 cents by 2016, depending on how much revenue is raised in the meantime. Both Maryland and neighboring Virginia are trying to relieve congestion in their metro areas by using the gas tax to fund more transportation projects.

In California, the tax on a gallon of gas is rising from 36 cents a gallon to 39.5 cents a gallon. In an ironic twist, state officials said they needed to raise the gas tax because more fuel-efficient vehicles are using less gasoline, thus lowering the revenue. Virginia seized on this idea as well, deciding to charge a $64 annual fee on hybrid and alternative-fuel vehicles because they don't consume as much gasoline. And Virginia also hiked its motor vehicle sales tax overall from 3 percent to 4 percent.

A few states cut taxes. In Tennessee, the sales tax on food will drop July 1 from 5.25 percent to 5 percent.

And a tax cut in Hawaii is being enacted July 1 in hopes of attracting more movie-making in the state of lush scenery. Hawaii is raising its tax credit for filmmakers from 20 percent to 25 percent in rural counties and from 15 percent to 20 percent in more populous counties like Honolulu. Hawaii has been the site for the filming recently of movies such as “The Descendants” and “The Hunger Games.”

The Woman Trying to Change Alabama's Gay Marriage Ban Does the Country Have Too Many Casinos?
RELATED
Topics
Taxes