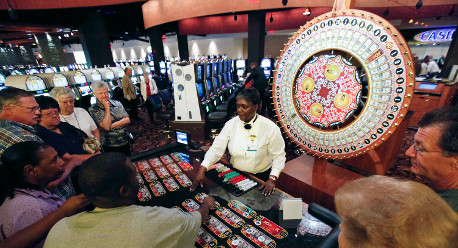 A casino worker at Harrington Raceway & Casino takes bets at the roulette wheel. The casino is one of three in Delaware that faces stiff competition from neighboring states. (AP)

States are still betting big on gambling. New York and Massachusetts are eyeing new, flashy resort-style casinos. The owner of one of the largest casinos in the country, Maryland Live! Casino, is among those vying for the final gambling license in Philadelphia and hopes to build a new $425 million casino there.

But in nearby Delaware, lawmakers are considering the unusual step of giving $8 million to the state's three struggling racetrack casinos.

Crucial questions face states after years of gambling fever. Can they still enter the gambling fray and claim a hefty chunk of revenue?  Or does that region, or the country for that matter, already have too many casinos? Is the jackpot running empty?

“The Mid-Atlantic states — Maryland, Delaware, West Virginia, New Jersey, Pennsylvania and soon New York — have reached saturation,” said Clyde Barrow, director of the Center for Policy Analysis at the University of Massachusetts Dartmouth, meaning the amount of slots and other games available meets the demand.

Are Tax Rates Too High?

Delaware follows only New Jersey with the biggest drop in casino tax revenue last year.  Delaware saw its take from gambling drop to $217 million in 2012, a 5.5 percent decrease from $230 million the previous year, according to data from the American Gaming Association.  New Jersey saw the steepest tax revenue drop last year at 8.2 percent — collecting $255 million, down from $278 million in 2011. Neighboring Pennsylvania raked in the most state tax revenue at $1.4 billion.

States with the Highest Casino Tax Revenues in 2012

The way states tax casinos varies widely, and the amount is generally much higher at racetrack casinos, or racinos. Delaware's three gambling operations are racinos where operators split 40.5 percent of the total take, the state gets 43.5 percent, the horse breeders get 10 percent and vendors, 6 percent.

Democratic Gov. Jack Markell has proposed a one-time infusion of $8 million divided among the racinos to offset expected increases in vendor costs. The proposal would not affect the current way the casino revenue is split, but would create a commission to look at changing the tax structure. The Delaware General Assembly is considering the bailout in its final days in session.

Delaware state Rep. Dennis E. Williams, a Democrat, opposes the governor's proposal. “I don't think we should be bailing out these three businesses,” he said. “Had they invested more at the time they had no competition they would be in much better shape now.”

If approved, Delaware would not be the first state to help out the casino industry in the face of new competition. Other states have cut tax rates, such as when riverboat casinos proliferated through the middle of the country in the 1990s. And two years ago, New Jersey passed a comprehensive Atlantic City revitalization plan pushed by GOP Gov. Chris Christie that included $261 million in tax credits to the now bankrupt Revel Casino in Atlantic City.

The issue may be less about the amount of taxes Delaware collects from its casinos and more about the array of choices that gamblers now have.

“Delaware is in a difficult position because its tax structure was devised at a time when it had a single competitor, New Jersey,” said David Schwartz, director of the Center for Gaming Research at the University of Nevada Las Vegas. “Now, Pennsylvania and Maryland have the state surrounded, so citizens have more options. “

Delaware's first race track casino opened in 1995. Pennsylvania started adding the first of its 11 casinos in 2007 while Maryland's first of three casinos opened in 2010. Last fall, Maryland voters approved expanding gambling, including a new casino in Prince George's County, which borders Washington D.C., and is 37 miles south of Baltimore.

New York, which already has nine racinos, will let voters decide in November whether to develop four resort-style casinos in upstate New York. And voters in Massachusetts just last weekend approved  a proposal from casino mogul Steve Wynn that will allow the first of three Las Vegas-style casinos to be built in Everett, four miles north of Boston.

Lucy Dadayan, a senior policy analyst at the Nelson A. Rockefeller Institute of Government, said gambling in its current form has “probably reached the saturation point” — not just in the Mid-Atlantic region but the entire country.

“The pool of gamblers is only that big and the expansion of casinos and racinos attracts only a smaller pool of new gamblers,” Dadayan said.

Other states suffering sharp declines in casino revenues are Colorado, Indiana, Missouri and New Jersey, she said. These are places that had casino operations for a long time and faced new competition in neighboring states, she said.

New casinos in Kansas, for example, are siphoning revenues from Colorado, Indiana and Missouri.  As Stateline has reported, Kansas saw a six-fold increase in gambling tax revenue between 2011 and 2012. The 605 percent increase in casino tax revenue in Kansas was due in part to the opening of the Hollywood Casino at the Kansas Speedway, and because last year was the first full year of operations for the Kansas Star Casino in Mulvane. 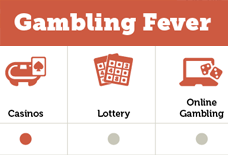 Online gambling is the latest frontier for states. Delaware, Nevada and New Jersey became the first states this year to pass laws to tap online gamblers.

Delaware and New Jersey may have older casinos but these two states could have an advantage. They along with Nevada are the only states that have approved online gambling.  Estimates vary on the amount of revenue Internet wagers could generate for casinos and states.  The American Gaming Association estimates that 1,700 offshore sites accept online bets, with the annual market estimated at $4 billion to $6 billion.

Delaware is scheduled to offer online gambling by Sept. 30. Nevada is already offering online poker.  New Jersey is still working on regulations, but online gambling could be operating by the end of the year.  In all three states, players have to be within the state borders to make their wagers.

But online gambling is not necessarily a silver bullet for Delaware or its casinos.  “We accomplish nothing if we basically shift today's brick and mortar customers to online,” Tom Cook, Delaware's secretary of finance, said. “We need a different set of patrons,” he said, notably a younger generation.

But those three states will have to act fast to cash in on any advantage of being first. Another 10 states are considering online gambling. “It's just a matter of time,” Cook said.