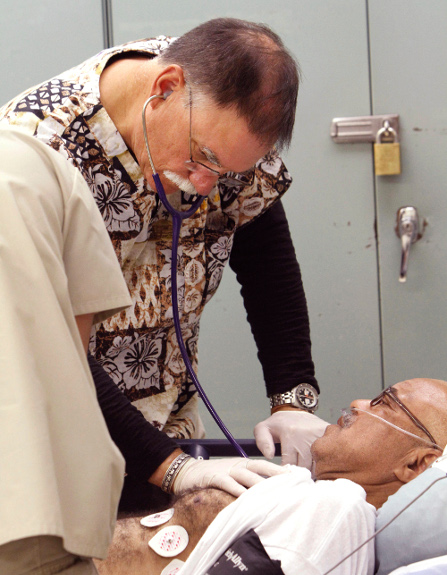 (CORRECTION 6/26/2013: The option of Medicaid does NOT extend to patients in mental institutions. Those references have been deleted)

Only a dozen states have taken advantage of a long-standing option to stick the federal government with at least half the cost of hospitalizations and nursing home stays of state prison inmates.

The other states have left tens of millions of federal dollars on the table, either because they didn't know about a federal rule dating to 1997 or they were unable to write the laws and administrative processes to take advantage of it.

States and localities have a constitutional obligation to provide adequate health care to prisoners, and they must pay for it out of their own budgets. However, a 1997 ruling says that care provided to inmates beyond the walls of the prison qualifies for Medicaid reimbursement if the prisoner is Medicaid eligible. The federal government then pays 50 percent to 84 percent of Medicaid costs.

Ever since that ruling, it has made fiscal sense to get inmates who needed outside medical attention enrolled in Medicaid, said Aaron Edwards, a legislative analyst in California who helped get the state's program started, “but in 2014 it really becomes a no-brainer.”

That's when the major elements of the Affordable Care Act take effect, and most prison inmates will be eligible for Medicaid if they need health services outside of prison. The number of inmates in state prisons as of 2011 was nearly 1.6 million, according to the U.S. Justice Department. An additional 745,000 were in local jails, a population that would also qualify for Medicaid benefits if they required outside medical care.

Right now, in most states, only prisoners who are pregnant, disabled or aged are eligible for Medicaid coverage when they need outside medical attention.

In states that are using Medicaid to help pay for hospital stays, the most common type of medical care that qualifies is hospitalization for childbirth, nursing home care for elderly inmates and surgery and other treatments for cancer, liver disease and other illnesses. Arkansas uses Medicaid exclusively to cover hospitalization of pregnant inmates.

Under early interpretations of the 1965 law that created Medicaid, anyone entering a state prison lost Medicaid eligibility. The same went for people who were in local jails and juvenile lock-ups. The reasoning was that states and local governments had historically taken responsibility for inmate health care so the federal-state Medicaid plan was not needed.

But an exception to that general rule opened up in 1997 when the U.S. Department of Health and Human Services wrote to regional Medicaid directors saying inmates who leave state or local facilities for at least 24 hours to receive treatment in local hospitals or nursing facilities could get their bills paid by Medicaid, if they were otherwise eligible. In addition to the incarcerated, those on probation or parole or under house arrest could participate.

But few prisoners were eligible since most states extend Medicaid benefits only to infants and children under five, pregnant women, people with disabilities and the frail elderly.

That changes in January when 22 states expand Medicaid eligibility to all poor adults in accordance with the Affordable Care Act. Most prison and jail inmates in those states would immediately become Medicaid eligible. (The only likely exceptions are undocumented immigrants and people who for whatever reason do not have a Social Security number.)

Since most inmates would be considered newly eligible for Medicaid, the federal government would pay 100 percent of all costs from 2014 to 2017. After that, states would be responsible for a small share of the costs, increasing to10 percent by 2020. In addition, state health insurance exchanges — scheduled to go live this October — will make it easier for corrections departments to sign inmates up for the program.

In states that are already using Medicaid to pay for outside inmate care, federal payments have added up quickly.

North Carolina, for example, started the reimbursement process in 2011. In May, the state reported that federal payments came to $10 million in the first year, a 4 percent chunk out of the state's $259 million prison health care bill.

Of the 1,449 inmates admitted to North Carolina hospitals in the fiscal year that ends July 1, almost half were eligible for Medicaid.

This year, the state expects much higher federal payments because the program is running more smoothly, said Larry Huggins, who supervises the corrections department's Medicaid program. But North Carolina won't see a big leap in federal payments in 2014, because Gov. Pat McCrory, a Republican, has said the state will not expand its Medicaid rolls under the new health care law.

In California, which is expanding Medicaid, federal Medicaid dollars for state inmates in the current fiscal year will reach $31 million. Edwards, the legislative analyst, said the legislature's conservative prediction is that federal payments for fiscal year 2014, which includes only six months under the 2014 expansion rules, will reach $52 million, about 3 percent of the state's $1.6 billion prison health care bill. In 2015, federal reimbursements are projected to total $69 million.

California prisons house about 130,000 inmates. But the Department of State Hospitals has not made the effort to set up the agreements with other agencies that would make reimbursements possible. The same goes for most county jails in the state.

Why have so few states and localities taken advantage of the opportunity to collect millions in federal money to defray correctional health care costs? Like everything else connected with Medicaid, the rules are complicated and implementing the program requires cooperation among at least three separate agencies: corrections, Medicaid and local social services.

Another problem is that inmates don't necessarily want to cooperate with prison personnel once they explain they are trying to defray some of their costs by drawing on federal funds.

Delaware, Louisiana and Oklahoma were the first states to use Medicaid for inmate hospitalization. As word of mouth traveled, a few more states enacted the needed laws and administrative procedures.

“There's been a lot of misinformation out there,” said Donna Strugar-Fritsch, a consultant with Health Management Associates who works with states to help them take advantage of the program. “It's enormously complicated if you haven't started yet,” she warned.

As a result, most states likely will not be prepared to take advantage of it for the 2014 expansion, Strugar-Fritsch said. But once states understand how much federal money they're leaving on the table, most will do what it takes to set up the needed systems, she predicted. “By 2015, it will be just silly if they don't.”