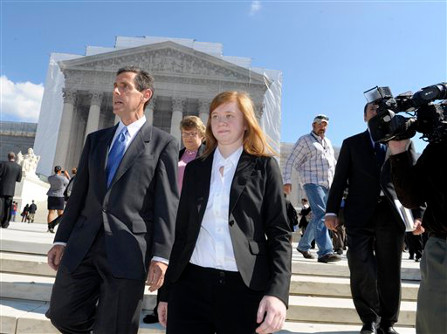 Abigail Fisher, the student involved in the University of Texas affirmative action case, and Edward Blum, who runs a group working to end affirmative action, walk outside the Supreme Court in Washington in 2012. The court Monday sent the case back to a lower court for further scrutiny. (AP)

The U.S. Supreme Court sent a highly anticipated case on affirmative action back to a lower court Monday, affirming the right of a university to use race as a factor in admissions, but only if it can prove that no “race-neutral alternatives” could produce the same benefits of diversity.

The high court directed the appellate court to review the case of Fisher v. University of Texas at Austin again, applying a tough legal standard known as “strict scrutiny” to determine whether to allow the use of race in admissions.

The court appeared to continue to support that creating a diverse student body justifies the consideration of race. But it warned in its 7-1 ruling that race-based admissions should be allowed only if “narrowly tailored to obtain the educational benefits of diversity.”

“It is at all times the University's obligation to demonstrate, and the Judiciary's obligation to determine, that admissions processes ‘ensure that each applicant is evaluated as an individual and not in a way that makes an applicant's race or ethnicity the defining feature of his or her application,”' Justice Anthony Kennedy wrote in the majority opinion.

The decision leaves many questions about the use of race in college admissions unanswered for now, returning the case to the U.S. Court of Appeals for the Fifth Circuit.

“Today's ruling is a complex one, but it does make clear that colleges and universities will have work to do,” said Molly Corbett Broad, president of the American Council on Education, which represents presidents of accredited institutions of higher learning. “Each institution will need to show that any process that considers race and ethnicity as part of a holistic admissions review is precisely tailored to meet the goals of achieving the educational benefits that flow from diversity.”

“Our colleges and universities seek to create the most challenging possible academic environment and produce students fully prepared to function in today's society,” she said. “A diverse student body is critical to that pursuit."

In the case, Abigail Fisher argued she was denied admission to the University of Texas at Austin in 2008 because she is white. Most students at the university are admitted through a program in which high school students who graduate in the top 10 percent of their high school class are automatically admitted, regardless of race. Fisher, who did not rank in the top 10 percent, had hoped to be admitted through an alternative admissions process, which considers a number of factors, including race.

The University of Texas defended the alternative admissions process, arguing that student diversity is an important goal. Other colleges and universities submitted supporting briefs saying they must be allowed to consider race because a diverse student body creates educational benefits.

At issue in the case was the question of whether using race violates the equal protection clause of the 14th Amendment.

The Supreme Court last made a major ruling on affirmative action in 2003. At that time, the court narrowly upheld the University of Michigan Law School's use of race as a factor in admissions, but struck down the affirmative action admissions policy at the school's undergraduate level, which gave under-represented minorities additional points in the admissions process.

In its next term starting in October, the court will again turn its attention to another affirmative action case in Michigan. This one involves a ban approved by state voters in 2006, which prohibits colleges and universities from considering race in student admissions.

Seven states besides Michigan — Arizona, California, Florida, New Hampshire, Oklahoma, Washington and Nebraska — ban the use of race in public college and university admissions, according to Ada Meloy, general counsel for the American Council on Education. Most of the bans were passed by popular votes in the states and also prohibit the use of race, and sometimes other factors such as gender or ethnicity, in public contracting and hiring, Meloy said.

Others said the Supreme Court decision, while influential, would not have much practical impact at most colleges and universities, which accept most students who apply.