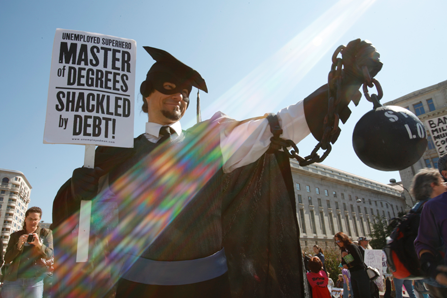 Gan Golan, of Los Angeles, dressed as the "Master of Degrees," holds a ball and chain representing his college loan debt during a protest in Washington. Many states have taken action this year to ease the cost of higher education. (AP)

College students across the country are watching anxiously as Congress tangles over competing proposals to keep the interest rate on federal student loans from doubling on July 1.

Among those keenly monitoring the debate is Sampson Armstrong III, 18, of Fort Washington, Md., a rising sophomore studying finance at Howard University. To pay for college, he is taking out the maximum amount of subsidized and unsubsidized Stafford loans each semester, while his parents work long hours to help him cover the balance.

Armstrong said he thinks of the estimated $100,000 to $110,000 he will owe by graduation as a brick house that he will have to tear down. “It's a huge hurdle,” said Armstrong, who hopes to one day own his own venture capital firm. “It's scary at times, but I believe that when I leave college I will hopefully be in a position to start paying it back regularly.”

Together, they owe about $1 trillion, up from $550 billion at the start of the recession in late 2007, according to a new report by Congress' Joint Economic Committee, which means Americans now owe more in student loans than in credit card debt. 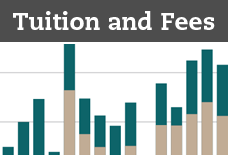 About two-thirds of those who graduated in 2011 had student loans, according to The Institute for College Access and Success (TICAS), a nonprofit based in Oakland, Calif., which aims to make higher education more available and affordable. The average amount of debt for borrowers was $26,600.

Although much of the current debate about rising student debt is happening at the federal level, the states played a central role in ballooning college costs. Since the start of the recession, many states have slashed funding for public colleges and universities, prompting institutions to raise tuition. At the same time, some states have expanded loan and scholarship programs to help students manage the rising cost of higher education.

The impact of the cuts can be clearly seen in rising tuitions at public colleges and universities. The average published tuition at four-year public colleges grew by $1,850, or 27 percent, since 2007-08, after adjusting for inflation. Increases topped 70 percent in Arizona and California, according to CBPP.

“Someone used to be able to go to school, work full-time over the summer and pay for their local public state university. Now they do that and save up for a fraction of tuition,” said Jen Mishory, deputy director of Young Invincibles, a national youth organization dedicated to expanding economic opportunities for young adults aged 18-to-34.

The College Board estimates that the average debt for those who took out student loans and earned bachelor's degrees in 2010-2011 from the four-year colleges where they began their studies rose 18 percent from a decade earlier, after adjusting for inflation.

“Like most governors in the country, I'm focused on jobs,” Shumlin said in an interview. “While we are enjoying the third lowest unemployment in America, when I talk to employers, they tell me they don't have enough students graduating with the skills to fill our jobs.”

Shumlin's budget for the upcoming fiscal year channeled an additional $2.5 million, or 3 percent, into the base appropriation for higher education, the first raise in five years. The entire bump will go to financial aid to students.

On June 6, Shumlin signed into law the “Flexible Pathways” initiative, which increases funding for a program allowing high school juniors and seniors to earn college credit. The legislation also allows more colleges to create “early college” programs accepting high school seniors, which is intended to make college more affordable for students. Both are free to students.

In Florida, Republican Gov. Rick Scott last month vetoed a 3 percent tuition hike at state colleges and universities that had been approved by lawmakers. Now, he is urging the institutions to absorb an automatic cost-of-living bump of 1.7 percent, so that tuition does not rise. According to the Palm Beach Post, tuition at Florida's public universities has grown 72 percent over the past five years.

“Higher education in Florida should be affordable so it is accessible to as many Florida families as possible,” Scott said earlier this month, responding to a report assessing Florida's public colleges and universities.

In Alaska, Republican Gov. Sean Parnell counts among his top achievements working with the state legislature to create the merit-based Alaska Performance Scholarship, which awards Alaskan students up to $4,755 per year for college or training in Alaska.

Over the past year, state legislatures across the country have passed a number of bills aimed at making college more affordable. The Indiana General Assembly, for example, approved a bill  earlier this year to make more state loans available to students attending college.

Many states have created or expanded eligibility for state scholarships:

But in some states, budget realities have prompted cuts that will further add to student debt. In New Jersey, for example, after Gov. Chris Christie threatened to eliminate a popular financial aid program intended to help keep top students in the state, lawmakers saved the program but cut by more than half the amount of money students can receive.

Ultimately, how the federal government and the states address the growing student loan dilemma will have a significant impact on their economies.

Unless Congress steps in before the July 1 deadline, the interest rate on subsidized Stafford loans is set to jump from 3.4 percent to 6.8 percent. (Interest does not accrue on subsidized loans during periods of deferment; it does accrue on unsubsidized loans.) More than 7 million borrowers would owe more money with a rate increase.

The pending Stafford loan rate hike would cost those who borrow the maximum amount in subsidized Stafford loans an extra $4,500. Last year, facing the same deadline, and, like this year, under pressure from President Obama, Congress voted at the last minute to extend the lower rate for one year.