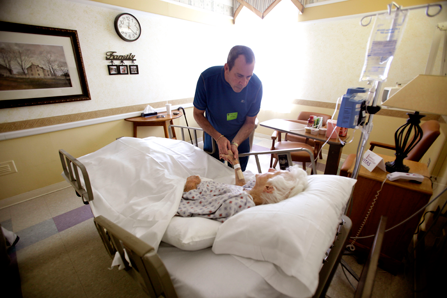 Joe Takach talks to his friend Lillian Landry as she spends her last days in the hospice wing of an Oakland Park, Fla. hospital. Many states have adopted a new end-of-life document designed to ensure that a patient's wishes are respected as death approaches. (AP)

The emergency call came in at 10:47 on a Saturday night: “Woman in Overland Park with difficulty breathing. Code one closest.”

Angela Fera, a paramedic in Johnson County, Kan., and her partner raced to the house, sirens blaring. When they arrived, six minutes after the first dispatch, a man told them that his 62-year old wife had terminal cancer and was unconscious. The paramedics found her sitting upright in bed, ghostly pale with a weak pulse and shallow breathing. Death seemed imminent.

The woman was under hospice care, and had signed a “Do Not Resuscitate (DNR)” order. She had made her wishes clear: She did not want to be taken to the hospital if a life-threatening medical emergency arose.

But the woman was not in cardiac arrest, the situation specified in the DNR order. Protocol required that Fera try to save her life, probably by inserting a plastic tube into her trachea to restore breathing and transporting her to a hospital, where she'd be put on a ventilator. Fera guessed that was precisely what the woman did not want. But the husband felt that his wife's children—his stepchildren—should be the ones to decide whether to withhold treatment.

“We were completely fighting all our instincts to jump in and save her, but on the other hand we really wanted to do what was right,” Fera recalled.

A new end-of-life document, more explicit and binding than a DNR and advanced directives, is designed to clarify patients' wishes—and spare caregivers such as Fera from facing such wrenching choices.

A “physician order for life-sustaining treatment” (POLST) is a medical order, signed by a doctor or other authorized medical provider. The product of a conversation between patient and provider, a POLST specifies a patient's goals and desires as death closes in. Unlike a traditional DNR, it covers such medical interventions as resuscitation, hospitalization, use of antibiotics, hydration, intubation and mechanical breathing ventilation.

Without much opposition or attention, many states have adopted POLSTs. This year, Indiana and Nevada approved legislation to allow their use, leaving only seven states and the District of Columbia without POLSTs in at least some stage of development.

They tend to come in garish colors—neon pink, orange, and green, for example—so they stand out among other documents in a home. People are encouraged to put them on their refrigerators, and paramedics are trained to look for them there. In Oregon, where POLSTs originated in the early 1990s, they are recorded in an electronic registry so first responders can access them online. Other states are moving in the same direction.

Research suggests POLSTs are effective in matching treatments to patients' wishes. According to one study, patient preferences noted on POLST forms matched the actual treatment—or non-treatment—in more than nine out of 10 cases.

Dr. Susan Tolle, one of the creators of POLST and director of the Center for Ethics in Health Care at the Oregon Health and Science University, said DNRs and other end-of-life documents tend to be vague or irrelevant to many medical situations. In many cases, they are signed by somebody whose authority may be in question during a medical crisis.

“We needed a portable system of actionable medical orders that would follow the patient and be consistently respected across settings of care, whether that was in a long-term nursing care facility, home, hospice, the ambulance or an acute care hospital,” Tolle said.

POLSTs are often confused with advanced directives, but they differ in significant ways. An advanced directive is often completed by a healthy person, and is purely hypothetical. It lacks the  medical authority of a physician's signature.

By contrast, a POLST is completed by a medical provider in consultation with the patient. POLSTs are geared toward severely ill patients who are expected to die within a year. According to Tolle, the most common triggers for completing a POLST are when someone begins hospice care, is admitted to a skilled nursing facility or is discharged from the hospital where they had a DNR order.

All states require a medical provider to sign a POLST. In most, the signer must be a physician, though some states allow other medical personnel, such as nurse practitioners, to sign it. Most states also require the signature of the patient or a designated surrogate but some, such as Oregon and New York, do not.

Some disability rights groups have focused on the issue of patient signatures. Without one, according to Diane Coleman, president of the disability rights group Not Dead Yet, “How do we know the POLST medical order actually reflects the desires of the individual?”  Coleman worries that depending on how POLSTs are presented, they can make life-sustaining treatments—such as the use of feeding tubes—seem unbearable, even though many disabled people are able to live full lives because of them.

In Texas, Wisconsin and Florida,  opposition to POLSTs has come from Catholic groups. Edward Furton of the National Catholic Bioethics Center worries that in cases where POLSTs do not cover the exact circumstances of the moment, denying care may be akin to euthanasia. “When you look at the POLST documents, they don't take into account the circumstances that the person is in at that particular time and place,” Furton said.

Nonetheless, there is no monolithic Catholic position on POLST. POLSTs have received strong Catholic support in some states, including California and Louisiana.

“This is not about ideology or religious views,” said John Carney, president of the Center of Practical Bioethics in Kansas City, which has worked to bring POLST to Missouri and Kansas. “This is about dignity and making decisions about what I want about my own life.”

At the scene of the emergency in Overland Park a year ago, Fera the paramedic had to act fast: She asked the husband of the unconscious woman to summon his stepchildren and a nurse from the hospice service. Then she directed the fire crew to use a bag valve mask to help the woman breathe for a short time.

When the woman's children and the nurse arrived, they quickly confirmed that the stricken woman had repeatedly said she didn't want to be revived in such a situation. With that assurance, plus approval via radio from an emergency room doctor, Fera and her partner left the woman at home in the care of the hospice nurse. They drove off, certain that the woman's end was near, and fairly sure that they had acted according to her wishes.

Fera is grateful that she is less likely to face similar situations in the future. In the year since responding to the call in Overland Park, Johnson County has adopted POLSTs. “To say we like it,” she said, “is an understatement.”