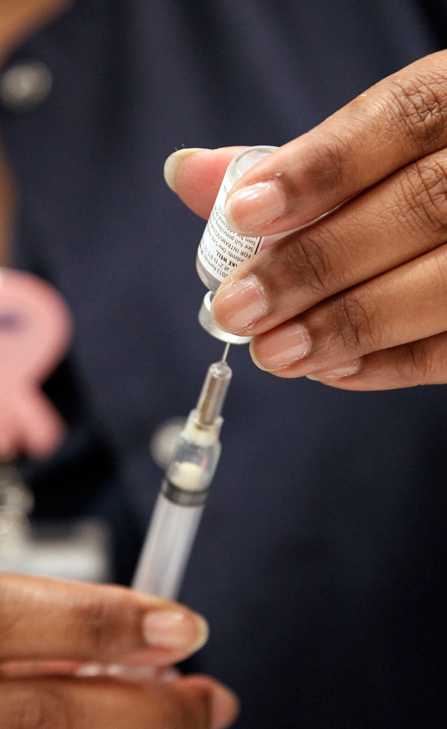 A Mississippi nurse loads a syringe with flu vaccine. A political fight in Mississippi could shut down Medicaid for more than 750,000 low-income residents. (AP)

The pressure on Mississippi Gov. Phil Bryant to call a special session on Medicaid expansion has increased after the state attorney general ruled that Medicaid cannot continue without legislative authorization.

Bryant, a Republican, had pledged to keep the program running on his own authority when Democrats in the legislature blocked a measure that would have reauthorized the Medicaid program but without the expansion of the Affordable Care Act. Bryant said he didn't need legislative approval.

The opinion by Attorney General Jim Hood, a Democrat, could mean that the entire Medicaid program would be shut down July 1, leaving 754,333 low-income Mississippians without health coverage. It would also put 915 full-time Medicaid employees out of work.

“We don't think that's going to happen,” said Rep. Cecil Brown, the Democrat who requested the opinion from Hood. The Democrats have pushed for expanding Medicaid eligibility, which would extend coverage to another 231,000 Mississippians. By refusing to reauthorize Medicaid, Brown said, Democrats hoped to force Bryant to call a special session.

“It's even more important now for the governor to call a special session as soon as possible to take up the Medicaid expansion,” Brown said.

The Democrats have offered a plan that would use Medicaid dollars to buy health insurance for low income residents. Such a plan would require approval from the Obama administration.

If Mississippi doesn't expand Medicaid, it would forego $14.5 billion in federal money over the next eight years.

Hood's opinion is not binding, a point Bryant's spokesman Mick Bullock seemed to note in his terse response. “That's all it is, his opinion,” he said.

There was Medicaid expansion drama in Maine this week as well. After a furious effort, Democrats fell three votes short of overturning Republican Gov. Paul LePage's veto of a measure to expand Medicaid there. That almost certainly ends the chances for an expansion in Maine this year.