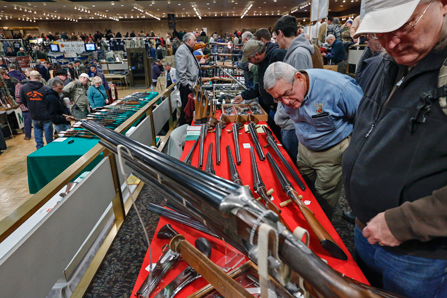 Gun enthusiasts gather at the annual New York State Arms Collectors Association Albany Gun Show last winter. Various gun-related measures are stalled in Congress, but states have adopted some of the same measures on their own. (AP)

Vice President Joe Biden said yesterday that the White House won't stop fighting for gun control measures—even though none of the proposals has come close to getting through Congress since the shooting at Sandy Hook Elementary School in Newtown, Conn., six months ago.

The Senate has considered 10 gun-related measures since January, both expanding and limiting gun access, according to the Congressional Research Service (the House has not taken any action). None has reached the 60-vote threshold agreed to by the Senate for any bill to move forward.

In some states, however, those same gun control policies are now law. So where have the ideas caught on?

IDEA: The White House and Senate Democrats are pushing to require background checks for private firearm transfers, such as those at gun shows. This is also known as the universal background check plan.

IDEA: President Obama asked Congress to reinstate the assault weapons ban which expired in 2004. California Democratic Sen. Diane Feinstein drafted a bill to permanently ban the manufacture and sale of certain semi-automatic firearms, like the Bushmaster .223 caliber rifle, which was used by shooter Adam Lanza in the Sandy Hook Elementary shooting.  The plan failed in the Senate with only 40 senators voting for the plan. .

Connecticut Democratic Sen. Richard Blumenthal offered a plan to restrict the sale and manufacture of gun magazines that can hold more than 10 rounds of ammunition. It was defeated, receiving only 46 votes.

IN THE STATES: Connecticut, Maryland, New York and Colorado all passed laws prohibiting the manufacturing, sale or purchase of any gun with a magazine that can hold more than 10 rounds of ammunition. In Connecticut and New York, anyone who owned an assault weapon when the new laws took effect must register them with the state.

IDEA: Wyoming Republican Sen. John Barrasso proposed a plan to reduce state grant funding to any state that releases information on gun owners to the public, especially data on concealed carry permit holders. It was adopted as an amendment with 67 votes, but the main bill was never voted on.

IDEA: Texas Republican Sen. John Cornyn proposed a measure that would have forced all the states to recognize concealed carry permits from all other states. Previously, this was called the National Right To Carry Reciprocity Act, which has passed the House of Representatives in previous sessions. Currently, states can choose if they will recognize out of state permits. Cornyn's plan was considered as an amendment but it failed to meet the 60-vote threshold.

For more on what states did on gun policy this year, check out this Stateline timeline: http://www.pewstates.org/research/data-visualizations/gun-actions-since-sandy-hook-shooting-85899482178

Or for a list of changes, check out this Stateline chart: http://www.pewstates.org/projects/stateline/headlines/new-state-gun-laws-show-power-of-one-party-control-85899467851