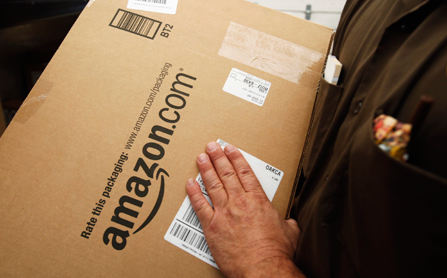 Amazon collects sales taxes in nine states and plans to collect from another seven this year. The online giant is backing efforts to set up a national system for collecting online sales taxes, as are other large retailers like Wal-Mart. (AP)

States could realize $23 billion in uncollected taxes if Congress approves the Internet sales tax bill, according to the National Governors Association and the National Conference of State Legislatures. The two groups on Wednesday urged the U.S. House to pass the bill before the end of the year.

“It comes down to a collection issue for the states,” said Dan Crippen, executive director of the NGA. “It's taxes already due that we have not been collecting.”

The legislation, formally the “Marketplace Fairness Act,” was approved by the Senate on a bipartisan 69-27 vote in May, but is stalled in the House Judiciary Committee where chairman Bob Goodlatte, R-Va., is highly skeptical. At the very least, Goodlatte has said in the past that he wants to modify any bill on the issue. Opponents held a news conference Tuesday in which several labeled the measure a tax increase and one that would complicate compliance, particularly for small businesses.

“It's no more a new tax than if you hadn't been paying your property taxes and suddenly you're on the rolls and paying your tax,” Crippen argued. “There's no reason this bill can't move this session and no reason we can't complete by the end of the year. “

Crippen and other supporters noted the bill would exempt businesses that do less than $1 million in sales annually. And they touted software that they said would help state and businesses collect the tax with little effort. Crippen said states have agreed to buy the software, so that it would not be a burden on smaller businesses. He said that would “take the cost of compliance out of the equation.”

The problem comes from a 1967 U.S. Supreme Court decision, in a case dealing with mail-order sales, which said companies had to have a physical presence in a state for that state to impose taxes on its sales. That is the law currently. But in the Internet age, when purchases increasingly are made online, stores with a physical presence are losing business to online competition. Not collecting sales tax gives a price advantage to online retailers, backers of the legislation say.