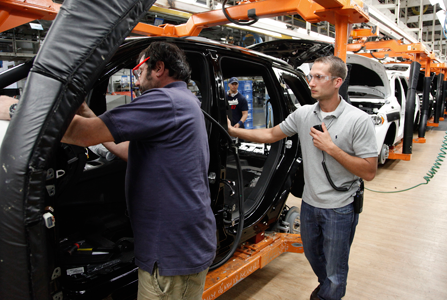 A supervisor observes work on the assembly line at a Chrysler plant in Detroit. In 2010 Michigan gave the company state tax credits valued at $1 billion, one of the state's 29 “megadeals” in the past 35 years. (AP)

Michigan has given large tax breaks and subsidies to employers more often than any other state, according to a new report that tallies up state and local “megadeals,” or incentive packages worth more than $75 million.

Good Jobs First, which tracks subsidies that state and local governments give to companies, found that Michigan has given 29 such deals to employers in the past 35 years. The state gave Chrysler and General Motors separate deals worth $1 billion each in 2010 and 2009, respectively.

But while Michigan offered “megadeals” most frequently, New York ranked first in overall spending on such giant packages, with $11.4 billion. New York also had the single most expensive deal: In 2007, the New York Power Authority gave aluminum producer Alcoa a 30-year discounted-electricity package worth an estimated $5.6 billion. Washington state had the second largest “megadeal,” a $3.2 billion package of tax breaks and other subsidies it gave to Boeing in 2003 (see sidebar).

Supporters say such incentives are an effective way to retain or attract employers. "The auto industry has rebounded and factories and new shifts are being added all over Michigan.  Of course the incentives from all levels of government helped,” said former Michigan Gov. Jennifer Granholm, a Democrat who was governor between 2003 and 2011, when many of the packages were negotiated.

But Good Jobs First argues that these incentives don't always create the jobs promised. And while 45 states disclose some company-specific data from these deals, the information isn't uniform across state lines, making it difficult to evaluate the costs and benefits.

As Stateline's recent Legislative Review reported, one of the biggest recent deals was Oregon's decision to preserve Nike's preferential sales tax treatment for the next 30 years. That agreement, aimed at keeping Nike in the state, is worth an estimated $2 billion to the company, the report said.

Following Michigan, New York had the second most “megadeals,” with 23; Ohio and Texas had a dozen each; Louisiana and Tennessee had 11 each; and Alabama, Kentucky and New Jersey all had 10 each, the report said.

Twenty-five of the packages involved relocations, 14 of them from one state to another. Florida this year, for example, awarded Hertz nearly $85 million in incentives to move from New Jersey to Estero, Fla. The remaining 11 deals involved relocations within a single state. For example, in 2011 Illinois gave Sears Roebuck $275 million to move its headquarters from downtown Chicago to a Chicago suburb instead of leaving the state.

Nationwide, since the late 1970s states and localities have spent more than $64 billion on large incentive packages designed to create or retain jobs, according to the report.

In total dollars spent on “megadeals,” Michigan ranked second to New York with a total of $7.1 billion. Five states were in the $3 billion range: Oregon, New Mexico, Washington, Louisiana and Texas.

Twenty-nine companies have received two or more “megadeals.” General Motors has gotten the most, with 11, followed by Ford with nine, Intel with six and four companies with four each: Boeing, Daimler (including Mercedes), Nissan and Toyota, the report said.

Absent from the report is Wal-Mart, the company that tops the Fortune 500 list.  The company has received more than $1.2 billion in taxpayer assistance, according to a separate Good Jobs First account, but its individual deals were worth less than $75 million each and thus didn't qualify for this report.