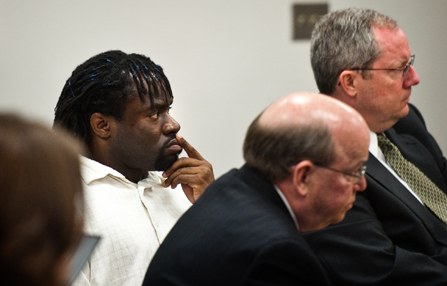 A North Carolina judge ruled last year that Marcus Robinson's trial was so tainted by the racially-influenced decisions of prosecutors that he should be removed from death row and serve a life sentence. North Carolina and other states are wrestling with death penalty reforms. (AP)

Supporters and opponents of capital punishment agree: The current death penalty is expensive, inefficient, and arbitrary. Some state legislatures have reacted to those faults by abolishing the death penalty, while others are trying to speed it up.

Since 2007, six states have abolished capital punishment—most recently Maryland, which did so this year. But other states, troubled by some of the same problems, have moved in the opposite direction:

In all three states, a death penalty backlog spurred frustrated lawmakers to act.

“We had a few of the states that had the most tied up death penalty systems decide that fixing wasn't feasible and repealed the death penalty, but nobody's happy with the status quo,” said Kent Scheidegger, general counsel for the Criminal Justice Legal Foundation, a victims-rights organization. “So they're left with the question, to borrow a phrase, mend it or end it?”

Speeding Up the Pace of Punishment

In 1976, the U.S. Supreme Court reinstated the death penalty after a 10-year moratorium. Since then, the court has consistently held that capital cases deserve extra scrutiny so that authorities don't execute an innocent person. Death row inmates can file numerous state and federal appeals. Nationwide, the lag between handing down a death sentence and the actual execution averages 14 years.

In Florida, however, the average wait is 22 years. The state's new Timely Justice Act imposes a schedule on death penalty litigation to “discourage stalling tactics,” according to Scott.

“An inmate who has been on death row for 22 years has had a fair opportunity to discover all of the evidence needed to challenge his conviction,” Scott wrote in his signing message. That amount of time “is surely a crushing burden of uncertainty to the victims' families,” he added.

Death penalty proponents have been especially active in North Carolina, where Republicans are firmly in control of politics in Raleigh for the first time in more than 100 years. Their top target was the Racial Justice Act, which Democrats narrowly pushed through in 2009 when they had a small legislative majority and control of the governor's mansion.

The law aimed to address North Carolina's history of racial bias in the justice system by allowing death row inmates to argue, using statistical evidence, that race was a “significant factor” in prosecutors' decisions to seek the death penalty. In the first four appeals under the law, inmates proved that North Carolina prosecutors dismissed black jurors at a much higher rate than white jurors in death penalty cases.

“We showed that prosecutors over the last 20 years had consistently excused blacks at twice the rates of whites,” said Tye Hunter, director of the North Carolina Center for Death Penalty Litigation. “It was true 20 years ago and was just as true five years ago, and it was true all over the state. It was quite amazing and consistent and the prosecutors just hated it.”

In prosecutors' notes, defense attorneys found references to black jurors as “blk. wino-drugs” or “thugs.” The prosecutors also had noted whether the juror came from a “respectable black family” or lived on a street that was predominantly black. Prosecutors also dismissed black jurors with mixed feelings about the death penalty, while retaining white members who also expressed misgivings.

But opponents of the Racial Justice Act argued that it effectively placed a moratorium on the death penalty by providing yet another appeal to convicted murderers. Each motion under the law created months of work for the prosecutor's office, said Peg Dorer, director of the North Carolina Conference of District Attorneys.

But even with the repeal of the Racial Justice Act, there are obstacles preventing executions from moving forward.  North Carolina is defending its three-drug lethal injection method in both state and federal court, and it cannot execute anybody until those lawsuits are resolved. According to the attorney general's office, there are multiple cases pending and no timeframe for when they might end.

There's also a worldwide shortage of the anesthetic sodium thiopental which is used in the three-drug cocktail in North Carolina and other states, forcing states to look for alternative drugs and litigate the constitutionality of the choice.

“Many states will have to change their method of execution, which means regulatory changes that have to be approved and lengthy court challenges,” said Richard Dieter, executive director of the Death Penalty Information Center, in an interview with Capitol Ideas. “In many states, this could take months, if not years, delaying executions.”

Finally, almost all of North Carolina's 161 death row inmates, regardless of race, have submitted motions under the recently repealed racial justice law.  It isn't clear whether those motions are still valid, and the uncertainty is likely to spur more litigation.

“In North Carolina, the legislative changes seem to have put the death penalty on the fast track, but the people may not want to see multiple executions in a short time,” Dieter said.