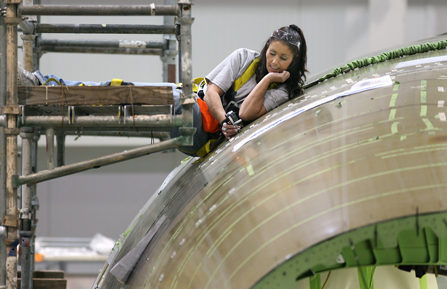 A Boeing employee works on an aft fuselage for the 787 Dreamliner at a Boeing plant in North Charleston, S.C. South Carolina gave Boeing $120 million in incentives to help it expand its in-state operations and create 2,000 jobs. (AP)

States this year awarded tax breaks to businesses, touted worker-training programs and even poached jobs from each other to boost their economies and create work for the nearly 12 million Americans still unemployed.

Oregon, for example, inked a 30-year tax deal to keep Nike from relocating. Wisconsin created a new "work-share" program that allows employers to cut workers' hours rather than give them pink slips. And Texas Gov. Rick Perry launched a high-profile campaign to entice employers in Illinois and California to move to the Lone Star State.

Four years after the recession officially ended, most states have bounced back fiscally, but their economies still aren't generating enough jobs for the millions of people who are still out of work or under-employed. 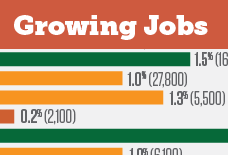 See Stateline Infographic: How Many Jobs Did Your State Create?

During the 2013 legislative session, states  dangled big incentives to lure or keep businesses in their states, but many made sure the packages required recipients to live up to their promises, such as creating a certain number of jobs.  Such safeguards are called “claw-back provisions,” and about three-quarters of nearly 240 state subsidy programs examined in a 2012 study included them.

“States are getting really savvy about giving these fairly significant economic incentive packages,” said Sujit M. CanagaRetna, a senior fiscal analyst at the Council of State Governments. “States have been aggressively going after companies and getting back money that was given to them,” in cases where companies failed to fulfill their promises.

States continue to dole out tax breaks to woo Hollywood producers despite criticism that such programs offer small returns:

“We, as governors, don't create any private sector jobs,” Pennsylvania Gov. Tom Corbett, a Republican, said earlier this year.  “It's the environment we create that can either help you make jobs or make it hard for you to make jobs.”

Corbett wants the General Assembly, which is still in session, to reduce Pennsylvania's corporate income tax from 9.99 percent to 6.99 percent by 2025 and phase out the state's capital stock and franchise tax.

Some Republican governors have already had success on that front. Republican New Mexico Gov. Susana Martinez called a sweeping corporate tax cut she signed this year a "game-changing jobs package." The plan trims the state's corporate income tax rate from 7.6 percent to 5.9 percent and allows for a “single sales factor option” for manufacturers in New Mexico. Twenty-five other states already have a similar provision, which can reduce state taxes on the profits of multi-state corporations.

Republican Indiana Gov. Mike Pence pushed through a package that repeals the state's inheritance tax and phases in a reduction of the tax that financial institutions pay from 8.5 percent to 6.2 percent. Banks and credit unions are expected to save $20 million a year, capital that they could then loan to businesses.  “This is a jobs budget, and it signals that Indiana is open for business,” Pence said.

Meanwhile, Florida eliminated its sales tax on the purchase of manufacturing equipment. “Florida businesses will now … finally be able to effectively compete against other states and countries,” Republican Gov. Rick Scott said.

Many Democratic governors contend that state government can indeed create jobs, and set out to prove it. Maryland Gov. Martin O'Malley estimated that his $3.7 billion capital budget will "support and leverage nearly 43,000 jobs." As part of the package, the state will invest $20 million a year to raise roughly $1 billion through the sale of bonds to build as many as 15 new public schools in Baltimore, where the governor was once mayor.

Similarly, Kentucky Democratic Gov. Steve Beshear signed a package that authorizes $363.3 million in bonds for construction projects at six state universities.  In Minnesota, Gov. Mark Dayton's "jobs proposal" would expand the world-renowned Mayo Clinic. Over the next two decades, the state will add $455 million to money from the clinic and local authorities to build a new “destination medical center.”  State funds will be used to demolish old buildings and construct new ones, as well as to build roads, parks and parking lots.

One of the biggest deals was in Oregon, where Gov. John Kitzhaber, a Democrat, called a special legislative session to win lawmakers' permission to negotiate a deal with Nike to preserve the Beaverton-based firm's preferential sales tax treatment for the next 30 years. Nike announced in April it would expand its Oregon headquarters, adding to its workforce of 8,000 workers and contractors, but didn't say how many jobs would be created.

Other states also struck deals with large employers to boost their manufacturing sectors:

Such deals are not without controversy.  In Arkansas, Democratic Gov. Mike Beebe's proposal to provide $125 million in tax incentives to Big River Steel LLC, an Arkansas firm, to help it build a $1 billion plant near Osceola won legislative approval, but with some reservations. Some lawmakers say it makes little sense to back a new start-up that will compete against another Arkansas steel mill that is just 30 miles away. They also worry about competing against China, which has been building new steel plants.

"I hope I'm wrong, but I would hate to invest $125 million of taxpayer money and it turn into a money pit," Republican Rep. Stephen Meeks said. The deal does have “claw-back” provisions.

Worried that Colorado was giving too many tax breaks to big oil and gas companies, lawmakers there overhauled the state's "enterprise zone" program. The new law caps the amount of income tax credits that can go to large corporations "who certainly don't need the tax credit," said House Majority Leader Dickey Lee Hullinghorst, a Democrat. Part of the money saved by changing the tax credit program will be used as seed money for emerging bioscience industries.

Greg LeRoy, executive director of Good Jobs First,  a grassroots organization that works with labor and community groups, said these recent deals reflect two parallel trends he has seen in the years that group has been tracking subsidies:  bigger packages, but also more strings attached to ensure tax dollars are well spent.

Half the states also launched "work-share" programs to persuade employers to reduce employees' hours instead of eliminating their jobs. Under such programs, employers save money and workers receive public money for the hours they lose.

"Instead of getting a pink slip during an economic downturn, workers now have an opportunity to stay on the job and receive unemployment benefits for the hours they lose," Republican Gov. Scott Walker said when Wisconsin this year joined 24 other states with work-share programs.

Work-sharing programs helped save more than 61,000 jobs last year and nearly 460,000 jobs since 2008, according to figures from the U.S. Department of Labor.

Radio listeners across California heard radio pitches from Texas Gov. Rick Perry inviting California companies to check out Texas. The theme of Perry's full-page ads in Illinois was "Get Out While There's Still Time," complete with an image of a red emergency exit door.

The Republican governors of Utah and Virginia made a similar joint appeal in a "job creation mission to California." From there, Virginia Gov. Bob McDonnell continued on to China and Japan. Later that month, Utah Gov. Gary Herbert went to Israel, reflecting an increased emphasis on trade missions, a trend among governors of both parties.

State officials in California and Illinois largely dismissed the efforts as political stunts. "It's not a serious story, guys," California Gov. Jerry Brown told California reporters when asking about Gov. Perry's ad. “It's a burp. It's barely a fart,” the governor said. Brown was in China when his counterparts from Utah and Virginia were in his state on their poaching mission.

How Many Jobs Did Your State Create State Revenues Are Up, But Not to Pre-Recession Levels
RELATED
Topics
Job Creation Taxes Economic Development
Places
United States