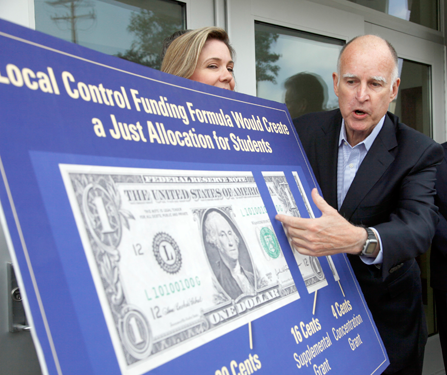 California Gov, Jerry Brown speaks during a news conference Friday May 17, 2013 at Humphreys Avenue Elementary School in Los Angeles. Brown's latest budget proposes a $17 billion infusion for California's K-12 schools over the next four years, a dramatic turn-around after years of teacher layoffs and program cuts that were common during the recession.(AP Photo/Nick Ut)

Tax revenues and spending rose in the vast majority of states in fiscal 2013, but both figures fell short of pre-recession highs when adjusted for inflation, according to a new report released Thursday.

The 2013 “Fiscal Survey of the States,” by the National Governors Association and the National Association of State Budget Officers, projects that states will spend some $699.2 billion in fiscal 2013, up 4 percent from the $672 billion they spent in fiscal 2012. But that amount is still lower than their 2008 spending, if inflation is taken into account. 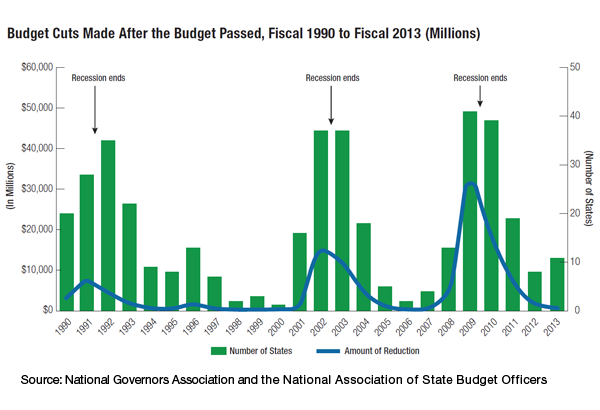 “States went through a hurricane, and weathered it well. They have been though quite a crisis,” said Scott Pattison, executive director of NASBO. “They have been patching the roofs and fixing up the houses, but the houses are not as good as they were before the storm.”

Pattison and Dan Crippen, NGA executive director, noted that many states cut education and transportation budgets in the past several years as a way to save money, and that those services are hurting. Some states put more money into those areas in the current budget cycle.

Medicaid continues to represent the single largest percentage of total state spending, estimated to account for 23.9 percent of total states' spending, the report pointed out.

Crippen noted that with the federal Affordable Care Act kicking in next year, Medicaid will be expanded in many states. In addition, he predicted that the publicity surrounding the “Obamacare” law may entice some of the 4 million people who are currently eligible for Medicaid, but who are not yet enrolled, to sign up. That will also increase the cost of Medicaid to the states.

“There are lots of things out there looming that will push states back into fiscal distress,” Crippen said. “As welcome as it is, (increased revenue and spending) is not going to be repeated in the future.”

“We are still, if you adjust for inflation, below pre-recession levels,” Pattison said. “But nominally, we're over the hump.”

Many states are collecting more in personal income taxes, the report found, but that is a “one-time” increase attributable to taxpayers shifting capital gains, dividends and personal income into 2012, as a way to avoid potentially higher federal taxes in 2013. The NGA and NASBO officials cautioned that the states should not count on similar shifting in 2014.