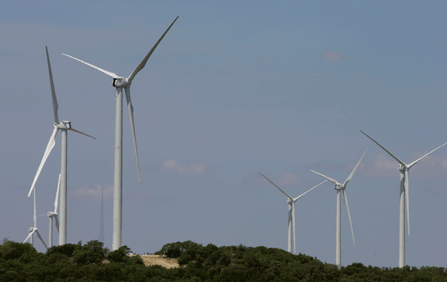 Will America's cheap, abundant natural gas dampen investment in renewable energy? Not in energy juggernaut Texas, economists say in a new analysis that should gladden environmentalists and other supporters of wind and solar power.

Natural gas and renewables can complement each other on Texas' stressed energy grid, even as they jockey for larger market shares, according to the report by economists at The Brattle Group, a Washington, D.C.-based consulting firm, which was commissioned by the Texas Clean Energy Coalition.

Texas, the lone state with its own power grid in the continental United States, is a key testing ground for the natural gas-renewables relationship. It leads the nation in both natural gas and wind, dwarfing all other states. Meanwhile, the state's energy demand is soaring with its population.

In the short term, the analysis says, low natural gas prices are “extremely unlikely” to uproot existing renewable energy capacity in Texas. Instead, both fuels are likely to further eat into the market share of coal, which has plummeted across the country. Though developers of renewables face higher upfront costs, such projects are cheaper to maintain because they aren't tied to volatile fuel prices. Once a gas-powered plant is running, its variable costs can top $30 per megawatt hour it generates, even at current low prices, the study says.

The idea that renewables — particularly wind — can hedge against spikes in natural gas prices and future policy shifts away from carbon is supported by a March paper written by Mark Bolinger, a research scientist at Lawrence Berkeley National Laboratory. Billionaire Warren Buffet's recent string of renewable energy investments also provides ammunition for the backers of renewables.

The Brattle Group report echoes recent findings by the Electric Reliability Council of Texas, which operates the state's grid. In a long term study, the council predicted the grid would see more than 20,000 megawatts of new natural gas generating capacity over the next two decades, along with nearly 17,000 megawatts from wind and 10,000 from solar.

“Natural gas generation and renewable resources are likely to be competitive across a broad range of potential future market outcomes,” said the report, released in December.

For now, however, the competitiveness of renewables hinges in part on how much federal support it gets.  Uncertainty over the generous wind production tax credit, for instance, has brought nationwide turbulence to the wind industry, which has grown rapidly in recent years, but still struggles to compete without the incentive.

But natural gas and renewables can work together, particularly when wind is not blowing or the sun isn't shining, the new study points out. When that happens, operators can quickly plug the gaps by sending more gas to the grid. Natural gas is a more flexible fuel than coal or nuclear power, though infrastructure that is ill-equipped to meet the surge in demand has led to reliability troubles in Texas and elsewhere.

“Low-priced natural gas and clean renewable resources are complementary, not competing, resources to displace other fuels over the long term,” Kip Averitt, chairman of the Texas Clean Energy Coalition said in a release. Averitt, also a former state senator, called for a more coordinated use of the fuels.