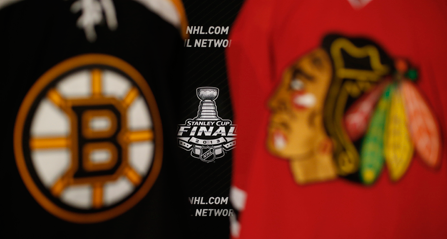 The governors of Illinois and Massachusetts have made a friendly wager on the Stanley Cup Finals matchup between the Chicago Blackhawks and the Boston Bruins. The series begins on Wednesday in Chicago. (AP)

The Stanley Cup Finals has turned two Democratic governor pals into rivals with a cause.

Massachusetts Gov. Deval Patrick and Illinois Gov. Pat Quinn have a bet riding on the matchup between the Chicago Blackhawks and Boston Bruins, who open a best-of-seven series Wednesday for the National Hockey League's ultimate prize. The stakes? A charitable trip into ‘frenemy' territory.

“I look forward to seeing the Bruins circle the ice with the Stanley Cup above their heads,” Patrick said Tuesday. “And I'm delighted to join with Governor Quinn to use the excitement of the playoffs to draw attention to the important issue of food insecurity.”

Quinn said Patrick is “skating on thin ice by betting against the mighty Chicago Blackhawks. But the Greater Chicago Food Depository can always use extra help, so after he works a shift there, I'm happy to take Governor Patrick to the United Center to see the Stanley Cup return home.”