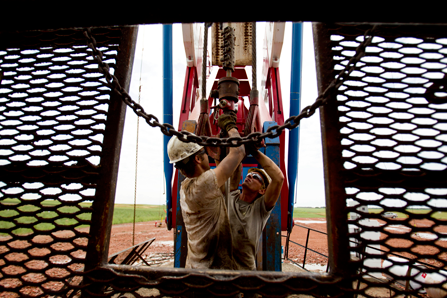 Two men work on an oil derrick outside of Williston, N.D. In North Dakota and several other states, the domestic oil boom fueled tax cuts. (AP)

Resurgent revenues prompted tax-cut talk from Bismarck to Baton Rouge — but in some states, the tax breaks never made it to the governor's desk. In other states, legislators used newfound money to pay for education, roads, or other areas that got short shrift during the recession.

Indiana and Oklahoma cut personal income taxes, Virginia cut fuel taxes and Idaho cut business and personal property taxes. In most cases, the tax cuts were made possible by budget surpluses, the result of greater economic growth in the states. Some states, such as Virginia, raised other taxes to make up the lost revenue. Still others dipped into surpluses — the first in years — to lower levies.

In a handful of fortunate states, the domestic oil boom fueled tax cuts. In North Dakota, Republican Gov. Jack Dalrymple signed a whopping 20 percent income tax cut for individuals and a $200 million cut in property taxes. And Alaska reacted to energy competition from North Dakota by reducing its severance tax (the levy on the extraction of natural resources to be used in other states).

Overall, 35 states debated tax changes during their 2013 legislative sessions, according to the National Conference of State Legislatures (NCSL). In 16 states, lawmakers proposed changing personal income taxes—in most cases, they wanted to lower them.

“For the first time in many years states aren't facing huge budget shortfalls,” said Mandy Rafool of NCSL. “Revenue sort of stabilized; there is slow, slow revenue growth.” About half the states have once again reached their pre-recession revenue peaks, according to Rafool.

Economist Scott Drenkard of the Tax Foundation, a Washington, D.C.-based think tank, noted the stark differences between 2013 and the state legislative sessions four years ago.  “In 2009, the roof was on fire,” Drenkard said. “The states that didn't raise taxes engaged in impassioned battles about keeping tax rates where they were. Nobody was cutting taxes then.”

However, some governors and legislatures that tried to cut taxes during their 2013 sessions were frustrated. Even having a legislature and governor of the same party was no sure pathway to lower levies. For example, Louisiana's GOP-controlled legislature handed Republican Gov. Bobby Jindal a crushing defeat by rejecting his proposal to eliminate the state income tax while broadening the sales tax.

See Stateline Infographic: No New Taxes? It Depends on Where You Live.

Jindal, who has made no secret of his presidential ambitions in a party led by tax-cutters, started in January with an ambitious plan to eliminate Louisiana's income and corporate taxes. Jindal proposed making up that revenue by raising the sales tax to 5.88 percent from 4 percent; upping cigarette taxes to $1.41 per pack from 36 cents per pack; and creating a slew of new taxes on business services.

Jindal traveled the state — campaign-style — to sell his plan. He was re-elected to a second term in 2012 with a whopping 66 percent of the vote, and was banking on that popularity to push his proposal over the top. But his poll numbers plummeted as his plan was buffeted from all sides. Progressive groups maintained the sales tax was regressive, while business groups said it was unfair to saddle them with more taxes.

In April, Jindal abandoned the effort, saying it was the wrong time to pursue it. “I recognize that in this instance I need to be the one who gives so that we can have the chance to achieve success," he said. "But I'm not going to pout, I'm not going to take my ball and go home."

The underlying problem, according to experts, is that it would have been very difficult to replace the revenue from the income and corporate taxes Jindal wanted to scrap.

“He (Jindal) could never quite make the numbers work,” said Jan Moller, director of the Louisiana Budget Project, a progressive group. Moller said that to keep the changes “revenue neutral” the sales and business taxes had to keep going up. Every time a change was suggested, Moller said, opposition grew.

“The reason we opposed it was that it was going to be a substantial net tax increase on business,” said John LeBlanc of the Louisiana Association of Business and Industry. “Even if you concluded it was revenue neutral to the state, it wasn't to the business community.”

Donald Boyd, of the Rockefeller Institute of Government, expects the tax-cut fever to continue next year. “If we continue the slow recovery, I think you'll see another round of tax-cut proposals,” he said. But “unless things change dramatically, you'll see a lot more of the same – people proposing tax cuts, but when the rubber hits the road, it's very hard to pay for them.”

In Indiana, Republican Gov. Mike Pence went for a big tax cut in personal income taxes of 10 percent. The GOP-dominated legislature gave him half a loaf – 5 percent – but also repealed the inheritance tax and cut business taxes.
In deep red Kansas, lawmakers discovered they got too carried away with a $4.6 billion tax cut last year that threatened to empty the state treasury. To make up for the shortfall, Gov. Sam Brownback and his Republican allies pushed through a $777 million, five-year sales and income tax increase.

In Blue States, a Different Story

In states with Democratic majorities, the extra money flowing into state treasuries created a different dynamic.

In California, for example, budget projections showed a $4.5 billion surplus in a total budget of $97.6 billion. Democratic Gov. Jerry Brown and legislative leaders agreed to shift more money to poor and non-native English speaking students, but to save most of the projected surplus for the next budget cycle.

In Illinois, lawmakers used a surge in tax revenues to trim $2.7 billion from the state's $8.5 billion debt. Several states focused on transportation and infrastructure. Maryland approved a gas tax increase of 20-cents per gallon by 2017, its first since 1992, to pay for transportation projects. Vermont raised its 19-cents per gallon gas tax by 5.9 cents to pay for road and bridge repairs.

In Washington, where a bridge recently collapsed, Democratic Gov. Jay Inslee is pushing for a 10-cent per gallon gasoline tax to help pay for $8.5 billion in road and bridge projects. Pennsylvania and Massachusetts were also seeking tax increases to pay for infrastructure construction and repairs.

And in Minnesota, the Democratic legislature and governor cut property taxes but increased income tax rates by 2 percentage points on the richest 2 percent of the population. Minnesota also increased its cigarette tax by $1.60 per pack, to a new total of $2.83. The Minnesota taxes were an attempt to raise $2.1 billion for early childhood education and other priorities.

Boyd, of the Rockefeller Institute, cautioned that states that collected more tax revenue this year should be careful about spending it or cutting taxes, because while tax collections are up, “32 states still have tax revenue below where it was in 2008, after adjusting for inflation. The revenue side is not as healthy as before.”