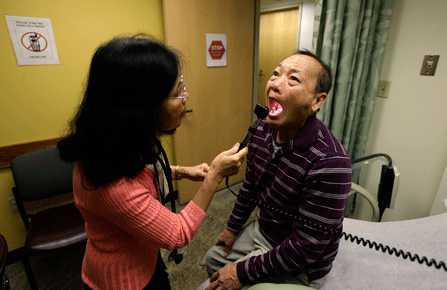 A physician's assistant examines a man at a Seattle clinic where the patients speak more than 50 different languages. States are wrestling with language barriers and other challenges as they launch new health insurance exchanges as part of the Affordable Care Act. (AP)

With the Affordable Care Act set to debut in January, state legislators debated dozens of measures related to the historic health care law—from overhauling insurance laws and designing health “exchanges,” to shoring up anti-fraud protections and increasing the ranks of doctors and nurses.

On top of that, the politically volatile question of Medicaid expansion grabbed headlines, especially in the five states that still haven't decided whether to expand the program.

“It's been an IT undertaking of Manhattan Project proportions,” says Matt Salo, director of the National Association of Medicaid Directors.

Salo was referring to the need to mesh Medicaid enrollment with the new health insurance exchanges, but he could have been talking about any of the dozens of technical and administrative changes state officials must make to prepare for the Affordable Care Act (ACA).

For example, state insurance regulators in nearly every state have been racing to approve hundreds of new insurance policies that will be offered on the exchanges starting Oct. 1. Meanwhile, the Medicaid expansion debate has highlighted longstanding problems with the federal-state health program for the poor, prompting many states to make changes.

Alabama Republican Rep. Greg Wren said the ACA “provided a real jolt to our governor and our legislative leadership to look at systemic reforms of our Medicaid program.” The result, Wren said, was the state's first major Medicaid overhaul, designed to better coordinate patient care and reduce costs.

Beyond “Yes or No” on Expansion

A Downsized Medicaid Expansion (Infographic): Medicaid expansion is up to states. Six are still on the fence: Arizona, Maine, New Hampshire, Ohio, Michigan, and Florida.

As of today, 21 states and the District of Columbia have decided to expand Medicaid. In at least five more states – Arizona, Florida, Michigan, New Hampshire and Ohio – governors support expansion but Republican-dominated legislatures continue to debate the issue. In Maine, Republican Gov. Paul LePage is threatening to veto an expansion passed by the majority Democratic legislature.

Under the current eligibility rules, Medicaid mostly covers pregnant women and young children, disabled adults and the elderly. Under the expansion envisioned in the ACA,  it also will cover adults, many of them childless, between the ages of 18 and 65 with incomes up to 138 percent of the federal poverty line—about $15,900 for an individual and $32,500 for a family of four.

Many states plan to extend their use of managed care to cover these new adults, aiming to add more primary care providers to their existing networks of obstetricians, pediatricians and other specialists.

States also expanded licensing of retail health clinics, which typically see patients in drug stores or big-box retail stores, and enacted reciprocal licensing laws that allow doctors in neighboring states to care for out-of-state patients in rural areas through the use of telemedicine technology.

Even in states that choose not to broaden Medicaid under ACA, 2014 is likely to bring a substantial increase in state Medicaid rolls: The Congressional Budget Office predicts that millions of Americans who already qualify for Medicaid will enroll for the first time once national ad campaigns publicize the new health law's individual insurance requirement.

Texas, for example, has firmly opposed Medicaid expansion under the ACA, but the state is expecting 555,000 people to sign up for Medicaid in the next nine years, growth that may cost the state nearly $4 billion.

Nationwide, the total cost of covering a projected 5.7 million people who are already eligible for the program but have never enrolled is estimated at $68 billion for states and $152 billion for the federal government, according to a study by the Kaiser Family Foundation and the Urban Institute.

Meanwhile, some GOP governors and lawmakers who are reluctant to expand Medicaid under the ACA are mulling alternative ways to expand coverage. One plan, referred to as “the Arkansas model,” would cover newly eligible adults through private insurance policies available on the health insurance exchanges. But the federal government has yet to approve that approach.

Insurance regulators in nearly every state began qualifying participating insurance companies and the policies they plan to offer starting in April. The process must be completed by July 31.

So far, California, Colorado, Maryland, Oregon, Rhode Island, Vermont and Washington have made public the names of the companies that have applied and their proposed policy prices. In every state, the new rates for individual and family policies on the exchange are expected to be higher than existing individual insurance policies. But because of new insurance company requirements in the ACA, the benefits for exchange plans in 2014 will be broader and there will be no caps on claims, making it difficult to compare them to today's policies.

Every year, unscrupulous health care providers squander billions of state dollars by overbilling, filing claims for services that were never provided, or otherwise cheating the system. With millions of newly eligible beneficiaries and billions of federal dollars coming into state Medicaid programs next year, the authors of the ACA reasoned that opportunities for criminal activity would surge unless states increased fraud prevention efforts.

In addition to federal requirements, lawmakers in several states voted for additional anti-fraud measures this year. “Fraud fighters have to keep investing in new tactics and technology to stay one step ahead of the bad guys,” said Megan Comlossy, health expert with the NCSL.

Under the ACA, states are required to ramp up background checks on new health care providers and immediately suspend claims payments when there is a “credible allegation” of fraud. Arkansas, Florida, Iowa and Texas enacted laws defining what type of evidence is needed to make such a credible allegation.

The federal health law also calls on states to report doctors and other providers they have kicked out of their Medicaid programs. The list will be kept in a national database that includes the names of providers who have been terminated from Medicare. The database is intended to prevent crooked health care providers from simply moving from state to state or from Medicare to Medicaid.

In addition, the law provides federal money to states that invest in new technology designed to spot criminal activity before claims are paid. Arkansas, Colorado, Massachusetts and Texas this year approved new laws calling for investment in so-called “predictive modeling” software similar to what credit companies use to reveal patterns of illegal activity, according to NCSL.

Whether states can stop more criminals from siphoning money from Medicaid remains to be seen. The same goes for state efforts to attract more primary care providers to serve the newly insured and educational campaigns aimed at convincing low-income adults to sign up for tax credits.

One thing is certain: Though most state legislative sessions will be over by July, the work of implementing the ACA will go on for years.