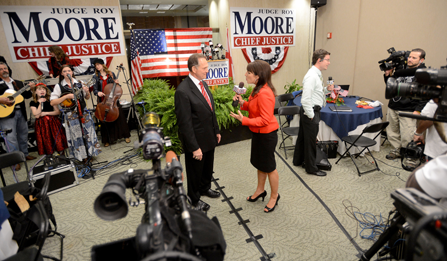 Campaign fundraising in state judicial elections has exploded in the last 15 years, and results are in: There's a statistically significant relationship between interest group donations and judicial decisions, according to a new report from the American Constitution Society, a progressive legal policy group.

"I never felt so much like a hooker down by the bus station … as I did in a judicial race,” said Paul Pfeifer, an Ohio Supreme Court Justice, recalling his 1992 campaign for the state's highest court. “Everyone interested in contributing has very specific interests. They mean to be buying a vote."

In a report called “Justice at Risk” released Tuesday (June 11), researchers found that the more campaign contributions from business interests that justices receive, the more likely they are to rule in favor of business litigants appearing before them in court.

Most expensive state high court elections in 2012 (all campaign donations)

For instance, if a justice receives half of his or her contributions from a pro-business group such as the state Chamber of Commerce, the judge would be expected, based on the report's data analysis, to side with business interests almost two-third of the time.

The findings come from an analysis of more than 2,300 state supreme court cases from 2000 to 2009, in which business faced off with consumers, and 175,000 state campaign finance records for the same period compiled by the National Institute on Money in State Politics. The report accounted for only that money donated directly to candidates and didn't include any accounting of independent spending to political action committees.

Campaign financing for state supreme court races more than doubled in the study period over the previous 10 years, to $206.9 million. The report focused on business interests and influence because even though business groups accounted for only about $62.6 million, or 30 percent ,of all of these campaign contributions, they were responsible for 90 percent of the $27.5 million in television ads paid for by interest groups in these judicial elections.

“We are in the midst of a ‘perfect storm' of campaign money,” said former Montana Supreme Court Justice James Nelson. “Favorable judicial rulings to satisfy this money, partisanship and a media attracted to (covering) typical politics that is now threatening to destroy judicial independence and impartiality.”

The relationship between business spending and pro-business decisions was especially strong in the nine states with partisan elections, where judicial candidates must align with a political party. In 2012, Alabama saw over $4 million flow into its partisan Supreme Court race, the most money in any state high court race in the country. There, business associations, lawyers and lobbyists outspent public sector unions by more than $1 million, according to the Institute for Money in State Politics.

Judges in 39 states face some kind of election, either an initial election to get on the bench, or a retention election following their appointment by a nonpartisan commission.