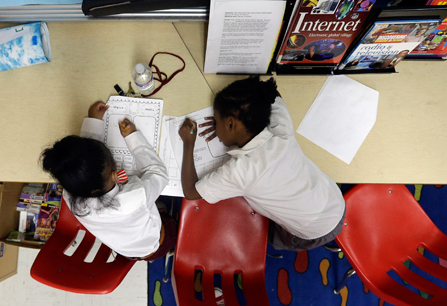 A pair of students works in a classroom at John Eager Howard Elementary School in Baltimore. Students in Maryland have made larger strides under No Child Left Behind than students in any other state, according to a new report. (AP)

Students in Maryland have made larger strides under No Child Left Behind than students in any other state, while West Virginia students have made the least progress, according to a new report comparing academic achievement across the 50 states.

Education Sector, a nonpartisan education policy group, compared math and reading scores for fourth and eighth graders from the National Assessment of Education Progress (NAEP), also known as “the nation's report card,” from 2003 to 2011. According to the analysis, gains in student achievement varied considerably by state, with the greatest disparities among students from low-income families.

New Jersey, Massachusetts and Hawaii followed Washington, D.C. and Maryland as the top performers, according to the report. Iowa, Oregon, New York and Michigan rounded out the bottom five after West Virginia.

“Many states have done a great job over the last decade helping all kinds of students make progress, but many states have not,” said John Chubb, the interim chief executive of Education Sector and coauthor of the study.

Other studies have focused on state-by-state differences in overall academic achievement, but not on progress. The earlier studies tended to show a correlation between high incomes and high achievement. But the Education Sector study found that income did not correlate well with progress. Students in some lower income states such as Georgia, Kentucky and Florida made relatively good progress, while students in high-income states such as Michigan and New York did not.

“The differences are really due to the quality of education policies over the last decade,” Chubb said. “It did surprise us. We were very impressed by the gains that were being made in some states, particularly for economically disadvantaged children, African-American and Hispanic kids – some of the top states made gains in those categories that over 20 years would eliminate achievement gaps and that's fantastic. But other states essentially stood still.”

The report discusses some of the practices of high-performing states, such as using student assessment data to measure the work of educators and requiring that new teachers be formally observed and evaluated multiple times in a year.

But Andy Porter, dean of the Graduate School of Education at the University of Pennsylvania, cautioned against drawing conclusions about the cause of improvements in academic achievement. “When you say these states that are on the improvement because of ‘X,' that's speculation,” said Porter, who had not seen the Education Sector report.

As lawmakers are debating whether to reauthorize the Elementary and Secondary Education Act, the primary federal law governing education, Chubb said they should keep in mind the differences in the states' progress in academic achievement, particularly for low-income students. He said that while states do need flexibility in deciding how to teach children, they should also be held accountable for student progress – or lack of it.

“The recommendation is that flexibility be provided but that progress be measured with a common metric – that could be NAEP or it could be new Common Core assessments – but flexibility without accountability is just irresponsible,” Chubb said.